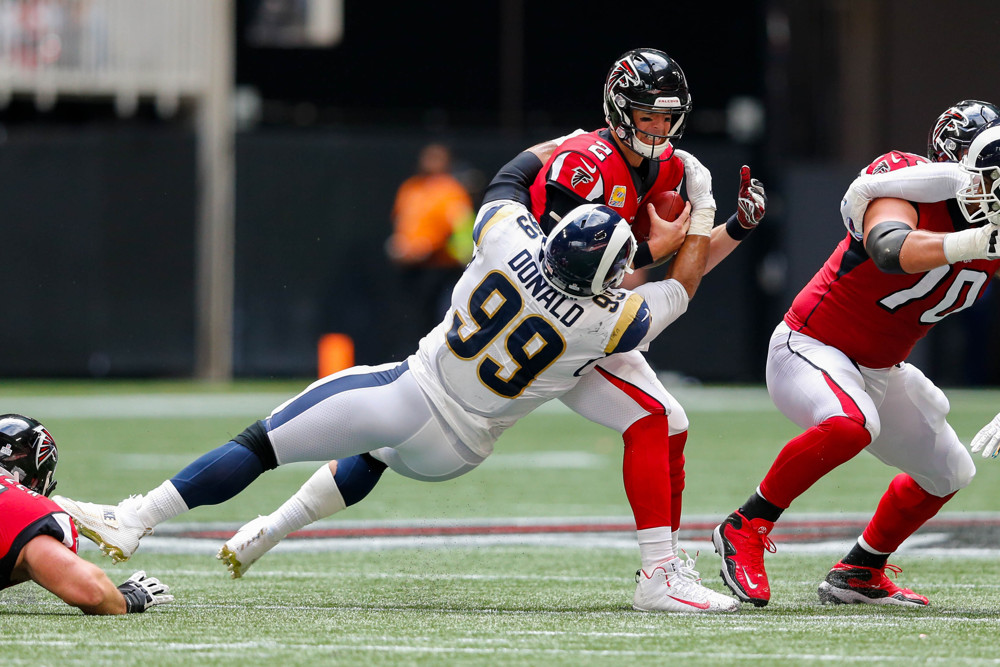 DL > OL
1. Rams DL vs. Bengals OL
Key matchups: DT Aaron Donald vs. the CIN interior OL, DE Dante Fowler Jr. vs. RT Bobby Hart
Notes: The Rams DL ranks 15th in adjusted sack rate with 18 total sacks and ranking 6th in ESPN’s team Pass-rush Win Rate metric. The Bengals OL ranks 23rd in adjusted sack rate, giving up 24 sacks, and has given up the 3rd most pressures in the NFL (98). QB Andy Dalton leads the NFL in pass attempts (287) & ranks 28th in passing rating on 3rd down (68.2). Cordy Glenn will not make his debut in this game despite practicing on Wednesday. RG John Miller is questionable.

The Bengals OL is an absolute mess without one quality starter and questions marks seemingly every week about who the starting five will be. With so much uncertainty, especially on the interior, Aaron Donald should be in for a performance of epic proportion with Fowler having his own glaring mismatches against both tackles.

Given that the Bengals are a pass-happy offense that rank dead last in rush yards per game and are the only team in the league averaging less than 3 yards per carry (2.9), there aren’t many crutches for this OL to rely on to help circumvent having to protect against Donald, Fowler, and this Rams front.

The Jets are coming off an offensive meltdown against the Patriots on Monday night, unable to deal with the inordinate number of blitzes they saw from an opportunistic and smart Patriots defensive front.

The Jaguars likely won’t blitz nearly as much due to having one of the best front fours in the NFL, but they present several mismatches across the line, led by Calais Campbell but complimented by an extremely explosive set of edge rushers in Yannick Ngakoue and Josh Allen. The Jaguars like to align Campbell alongside one of these two and run different stunts and twists with them, which are increasingly more difficult to deal with having new starters in the lineup. The Jets have a patchwork starting five that haven’t had a set lineup the last few weeks due to injury and performance, putting them in an untenable situation against this loaded Jags front.

The Patriots DL and entire defensive front have a dynamic group of pass-rushing threats coming from all angles and levels that don’t have a single standout player for opposing offenses to key on, making them exceptionally difficult to prepare for each week. Their performance last week against the Jets was a masterclass in disguising blitzes and pressure, something this Browns OL is ill-equipped to handle.

The Browns OL have been a below average group this year with both tackles struggling as pass-protectors and a QB in Baker Mayfield that isn’t playing with a lot of confidence inside the pocket. Going on the road against one of the most dominant defenses we’ve ever seen through 7 games with a leaky OL and shaky QB play is a recipe for disaster for this Browns offense.

The Saints DL have been on a tear for most of the season and the Cameron Jordan vs. Justin Murray matchup looms large as a huge mismatch, with Jordan having an enormous advantage, especially if the Cardinals play from behind for any extended period of time.

The key to the game will be the Cardinals 3rd ranked rushing offense (per DVOA) against the Saints 9th ranked rushing defense. If the Cardinals can’t control the game with their rushing attack, their OL has a strong chance at getting exposed by this Saints DL. I lean towards the Saints having enough opportunities to get after the QB for them to be a solid play this week, especially being at home.

This one is as simple as one of the best pass-rushing DLs facing off against one of the worst pass-blocking and overall OLs. Even with DL Stephon Tuitt recently being put on injured reserve, this DL’s production is more of a collective effort built around an increased number of blitzing this season compared to years past. There should be a drop-off in production from the DL over the course of the season, but it likely won’t be felt this week. Whenever a high-level DL faces off against the Dolphins OL there is good reason to expect a lot of pressure on the QB.

This one really comes down to Khalil Mack getting to face what is probably the worst tackle duo in the NFL with below average players on the interior when he slides inside. After being shut out last week against the Saints’ stellar tackles and OL, Mack is due for a bounce back game and should be able to wreck shop from either side in this one. This is also the sort of game where OLB Leonard Floyd and DL Roy Robertson-Harris could make a splash.

Okung’s return should be a big boost to the Chargers OL, but it will likely be felt in future weeks as Trent Scott is slated to “probably play the bulk of the reps” per Chargers head coach Anthony Lynn.