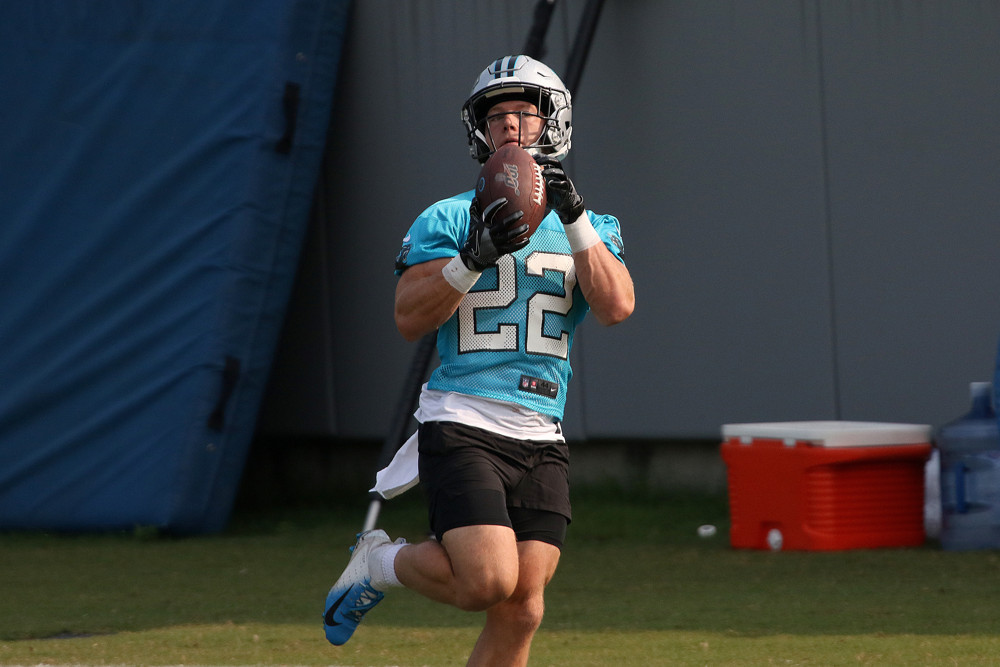 Cam Newton enters year two as the focal point of OC Norv Turner’s offense after getting off to his usual hot start with top-five QB1 results in Weeks 1-12 in a scheme that encouraged Newton to get the ball out quickly or simply take off. Long a vertical passer, Newton’s 7.3 aDOT was a career low. In Week 13, Cam suffered a setback to the throwing shoulder he had surgically repaired in March of 2017 and never recovered before shutting it down in Week 15. He underwent a second surgery this January. The arrow is pointing upward on Carolina’s supporting cast, and Newton’s on-field play hasn’t remotely diminished after all of Cam’s 2018 advanced performance metrics fell in line with career norms. Relative to Average Draft Position, Newton is one of my favorite quarterback picks in the early double-digit rounds and an enticing long-shot MVP bet. FanDuel Sportsbook has been offering Newton’s MVP odds at 50 to 1.

D.J. Moore flashed his lofty ceiling and then some as a first-round rookie, averaging only 24.8 snaps in Carolina’s initial six games before popping to 56.3 the rest of the way with WR20 fantasy PPR results in Weeks 8-17. Moore led all rookies with 50-plus targets in yards per route run and showed afterburners on a league-high 7.9 yards after catch per reception. 2018’s No. 2 SPARQ receiver and first wideout drafted, Moore checks virtually every box as sophomore breakout and WR2 pick with WR1 upside.

Curtis Samuel experienced a later-season playing-time spike, logging 59.2 snaps over Carolina’s final six games after sparingly playing early on. Despite his usage ups and downs, Samuel totaled 80-plus yards from scrimmage and/or scored a touchdown in 8-of-13 appearances. A 4.31 speedster whose career trajectory is screaming up, Samuel is an exciting Dynasty buy worth targeting in the late single-digit rounds of season-long leagues. The Panthers passed at the highest rate of Newton’s career in Norv’s first year as offensive coordinator, and Samuel is every bit capable of competing for the team target lead.

Greg Olsen is back for year 13 after breaking his foot in September of 2017, returning that November to re-break the foot, breaking the foot again last Week 1, then tearing his plantar fascia in December. He turned 34 in March. In the seven games where Olsen played 45-plus snaps, he maintained a full-season receiving pace of 560 yards and nine TDs. Still barely worth season-long draft discussion, Olsen’s appeal is limited to TE3 dart throws in best ball. Olsen would be optimally used as a passing-down player only.

2018 fourth-round pick Ian Thomas delivered 220 yards in six spot starts as a rookie and held his own as a blocker, particularly in pass protection where Thomas was PFF’s No. 9 tight end among 70 qualifiers. For a team short on wideout depth, Norv’s optimal approach may be to play Olsen and Thomas as much as possible in two-tight end 12 personnel. League-wide coaching preferences for three-receiver “11” suggest Olsen and Thomas could end up battling for sub-package snaps with Jarius Wright, Torrey Smith, and Chris Hogan, among others. Neither Olsen nor Thomas is an exciting 2019 re-draft play, but Thomas carries ample Dynasty appeal with 34-year-old Olsen likely in his final season. Thomas is a freak athlete with 91st-percentile SPARQ results, including 4.65 speed and a 36-inch vertical at 6-foot-4, 259.

Observers laughed at Panthers coaches for promising to use Christian McCaffrey as one of the NFL’s highest-volume bellcows last offseason. Ron Rivera’s staff earned the last laugh as CMC went berserk, leading all NFL backs in snaps played and breaking Matt Forte’s record for receptions by a running back (107). McCaffrey’s yards per carry spiked from 3.7 as a rookie to 5.0 behind a Carolina line that ranked No. 11 in Football Outsiders’ Adjusted Line Yards, then landed stud C Matt Paradis on a three-year, $27 million deal and 37thoverall pick LT Greg Little while returning LG/RT Daryl Williams from last year’s knee injury. Used like LaDainian Tomlinson under ex-Chargers coach Norv Turner with even more passing-game emphasis, McCaffrey is neck and neck with Saquon Barkley and Ezekiel Elliott as 2019’s No. 1 fantasy pick.

Bolstering McCaffrey’s case as a top-three season-long selection is his absence of imposing competition for touches. Carolina’s top reserve talent is fifth-round pick Jordan Scarlett, who ran 4.47 at 5-foot-11, 208 in Indy but never reached 180 carries in an individual season at Florida due to off-field incidents and part-time usage. Most worrisome, Scarlett struggles to catch the ball. In an upset, Cameron Artis-Payne has lasted five years on the Panthers’ roster despite minimal contributions. UDFA Elijah Holyfield averaged 6.4 yards per carry as Georgia’s early-down banger last year, but fell out of the draft when he ran a 4.78 forty at the Combine. Stylistically, Holyfield still may be Carolina’s best complement to CMC.

The Panthers’ Win Total is 8.0 games, a mark they’ve beaten in only three of Cam Newton’s eight years as a starter. So much depends on the stability of Newton’s twice-surgically-repaired shoulder, widely seen around the NFL as caused by Cam’s shoddy mechanics and passing technique, which add strain to his throwing arm. Last year’s Panthers started 6-2 before a devastating seven-game losing streak in which they dropped fivegames by one score. All told, Carolina went an unfortunate 3-7 in one-score decisions and should experience positive mean regression. After adding C Matt Paradis, LT Greg Little, and LG/RT Daryl Williams to the offensive line and OLB Brian Burns and DT Gerald McCoy to revive what was last year one of the NFL’s weakest pass rushes, I’m taking the Panthers to exceed 8.0 wins.