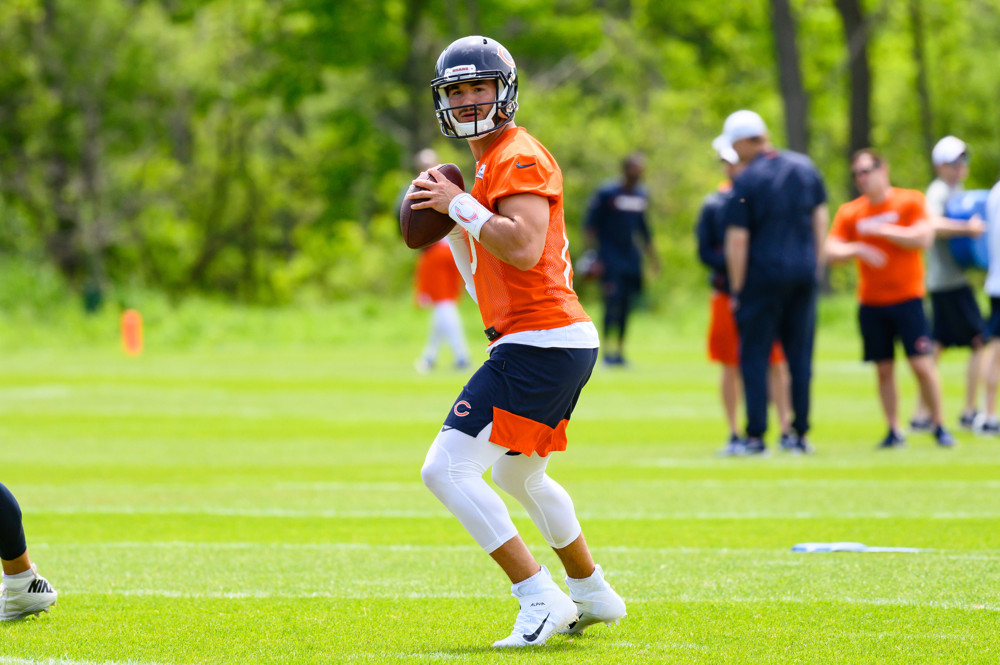 Mitchell Trubisky enters year two under coach Matt Nagy after taking massive leaps in every relevant metric as a sophomore. He engineered one of the NFL’s most-improved offenses with top-five QB1 scoring in Weeks 1-10, only to suffer a Week 11 shoulder strain, miss two games, and struggle for QB23 results in Weeks 14-17. Trubisky spikes his fantasy stock as an aggressive scrambler, last year averaging 6.2 yards per carry and finishing fifth among quarterbacks in rushing yards (421) despite ranking 18th in snaps. In an offense returning every significant pass catcher and all five starters on the line, Trubisky’s dual-threat capability and steady ascension in Nagy’s creative scheme give him upside QB2 appeal.

Allen Robinson is one of my favorite 2019 season-long buys at his affordable ADP after a predictably up-and-down 2018 campaign where Robinson switched teams and learned a new offense with a new quarterback following his ACL-ruined 2017. Including his 10/143/1 Wild Card eruption, Robinson logged a rock-solid 74/1,025/6 full-season pace in 14 appearances, missing three games with hip and rib injuries. Targeted by Trubisky more than any other Bears pass catcher, Robinson is talented enough in an opportune enough situation to flirt with low-end WR1 production at a fringe WR2/3 cost.

Anthony Miller earned the Bears’ first-team slot job in his first season, finishing second among rookie receivers in touchdowns (7) but dislocating his left shoulder “five or six times” and toughing out 15 appearances in a harness. Miller ran a very-nice 69% of his routes in the slot and gained 83% of his yards on interior targets. After undergoing offseason shoulder surgery, key to Miller becoming fantasy relevant will be his recovery and ability to carve out a consistent target share in a balanced offense within a widely-distributed passing game. Ultimately, WR4 value is probably Miller’s ceiling in year two.

Also in the hunt for receiver snaps are holdover Taylor Gabriel, rookie Riley Ridley, 2018 preseason standout Javon Wims, and KR/RB/WR Cordarrelle Patterson. Gabriel set career highs in receptions (67) and yards (688) in his Bears debut but cleared 65 yards just twice in 17 games including playoffs. Despite substandard size (6’1/194), speed (4.58), and college production (70 catches in three seasons), Ridley’s crisp route running drew enough scouting attention for GM Ryan Pace to draft him in the fourth round. A 2018 seventh-rounder out of Georgia, Wims led the NFL in preseason receiving yards (227) and flashed pro-caliber contested-catch skills at 6-foot-3, 215. Patterson’s calling card is his field-flipping kick-return ability, but he can also be a legitimate receiving and rushing gadget-guy weapon.

Trey Burton got caught up in Chicago’s spread-out passing attack, staying fantasy afloat with six TDs but topping 40 yards in just 3-of-16 games and failing to do so at all after Week 7. He finished a lowly 23rdamong 30 qualified tight ends in yards per route run (1.16), dwelling in the Jimmy Graham (1.16) and Jeff Heuerman (1.15) range. Burton missed Chicago’s playoff loss with a groin injury and underwent offseason sports hernia surgery, then suffered a setback early in training camp. Burton remains unlikely to emerge as a box-score difference maker as a complementary cog in a squeezed passing-game wheel.

Pace traded up to draft David Montgomery with the 73rdpick after shipping Jordan Howard to Philly. Montgomery landed in opportunity heaven; Chicago is missing the NFL’s second-most carries from last year’s team after finishing sixth in the league in rushing attempts. Although Montgomery’s speed (4.63) and college yards per carry (4.7) don’t stand out, he led the nation in missed tackles forced in 2018 and is an enormous upgrade on Howard in the passing game, where Montgomery caught 71 passes as a 2 ½-year starter at Iowa State and also shined in pass protection. Montgomery’s biggest supporters compare him to Kareem Hunt. Montgomery will have to hold off Tarik Cohen and Mike Davis for snaps, but he is the clear favorite to lead the Bears in touches behind an offensive line returning all five starters.

Tarik Cohen parlayed 10.6 touches into 73.1 yards per game in his first season under Nagy, finishing sixth among NFL backs in receptions (71) and as the RB11 in PPR points per game. As the Bears have typecast 179-pound Cohen as a niche back, his fantasy value is heavily skewed to points-per-reception scoring. Montgomery and Davis offer much more receiving utility than Howard, suggesting Cohen’s 2019 targets could take a hit. An inconsistent week-to-week flex option, Cohen is overvalued across formats.

Three-year, $6 million pickup Mike Davis is a superior Montgomery handcuff at 217 pounds with enough passing-game chops that Davis operated as Seattle’s third-down back in 2018, catching a career-high 34 passes. Davis also averaged a career-best 4.6 yards per carry and finished No. 14 among 47 qualified backs in rushing Success Rate (52%), beating out 2018 teammate Chris Carson (51%) and Chicago predecessor Howard (50%). Still, Davis would likely need a Montgomery injury for fantasy relevance.

The Bears’ Win Total is 9.0, a number they beat just once in the previous half decade before 2018. Although I never envisioned last year’s club winning 12 games, Chicago was among my favorite 2018 over bets with improved offensive coaching facing one of the league’s softest schedules. The Bears’ record in one-score games will likely regress after last year’s club went 7-4 in such closely-decided affairs, however, and losing defensive mastermind Vic Fangio is a concern after Chicago’s defensive DVOA made huge improvements in each of Fangio’s four seasons (31st> 23rd> 14th> 1st). Now facing the league’s fifth-toughest slate based on Opponent Win Totals, the Bears are a fade for me at 9.0 wins.