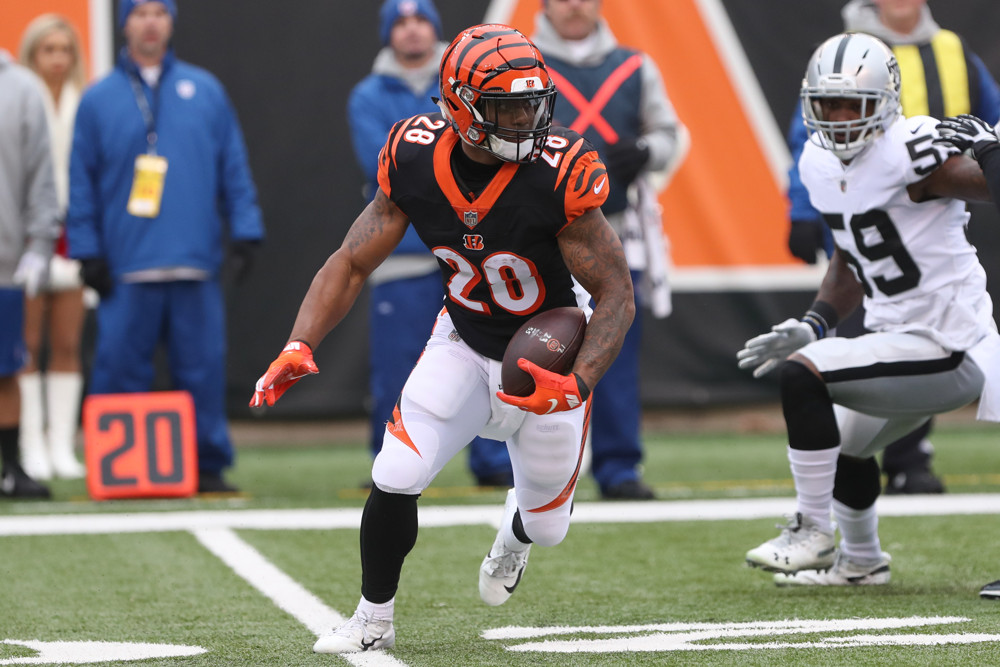 Especially after the Bengals passed on Dwayne Haskins at the No. 11 pick, Andy Dalton was one of the offseason’s biggest winners with solidified job security. Despite injury disarray around him, Dalton was 2018’s QB16 in Weeks 1-12 before tearing a ligament in his thumb and missing the rest of the year. Albeit never a teammate elevator, Dalton has been steady enough that he qualifies as a potentially underrated late-round QB2/3. Furthering Dalton’s case is Cincinnati’s hire of Sean McVay disciple Zac Taylor, whose 2018 Rams ranked fourth in the NFL in offensive plays. Marvin Lewis’ sloth-paced Bengals were 29thand 32nd in play volume the last two years. Hurting his cause is A.J. Green‘s (ankle) expected early-season absence.

A.J. Green was on pace for a mammoth 90/1,374/14 receiving line eight games into last season before a foot/toe injury requiring surgery ended his year. Still an elite performer, Green ranked No. 7 among 96 qualified receivers in yards per route run (2.39) and remained a target hog, suggesting Green’s lost little from the tank entering his age-31 campaign. Green has 81 catches for 1,187 yards and ten TDs over the last 16 games in which he played 30-plus snaps. Unfortunately, Green tore ligaments in his ankle early in training camp and is not expected to be ready for Week 1, rendering him much more of a boom-bust fifth- to sixth-round pick than the second- to third-rounder he was previously in 12-team season-long leagues.

Tyler Boyd was 2018’s premier third-year receiver breakout, parlaying Tyler Eifert’s early-season injury and John Ross’ virtual nonexistence into No. 2 target status in Cincinnati. Even as he lost the final two games to an MCL sprain, Boyd’s 733 yards gained on slot routes ranked third in the NFL behind Tyreek Hill (857) and JuJu Smith-Schuster (771), and Boyd ranked 21st among 96 qualified receivers in yards per route run (2.06). Boyd figures to be used similarly to Cooper Kupp under ex-Rams assistant Taylor. Not yet 25 years old, Boyd’s arrow is pointing up. The Bengals rewarded him with a four-year, $43 million extension just before camp. Although it’s concerning that Boyd averaged 4.6 fewer PPR points per game with Green out of the lineup last season, Boyd’s ceiling is raised by Green’s expected early-year absence as a potential target hog.

John Ross’ inability to earn 250 receiving yards through two seasons as a first-round NFL pick puts him in worrisome company with two relative success stories (Haywood Jeffires, Mark Ingram Sr.) among 20 qualifiers since the AFL-NFL merger. In his second season, Ross finished dead last among 96 receivers in PFF’s yards per route run (0.57). He will also miss most of training camp with a hamstring injury. Only Ross’ dirt-cheap ADP keeps him on the fantasy radar at this point.

Tyler Eifert re-upped on a one-year, $4 million deal after a broken right ankle cut his 2018 season 12 games short. A full participant in Cincinnati’s offseason conditioning program, Eifert’s upside is enticing even as an injury-marred underachiever. The Bengals are likely to scale back Eifert’s snaps, however, after re-signing C.J. Uzomah to a three-year, $18.3 million deal and drafting Drew Sample in the second round. Eifert is best viewed as a best-ball TE3 and tight end premium draft target but could emerge as a TE1 streamer if he finally stays off the shelf. He’s missed 34-of-48 games (71%) over the past three years.

Joe Mixon admitted to playing his rookie year out of shape, only to erupt as an in-shape sophomore, spiking his yards per carry from 3.5 to 4.9 and finishing top ten in rushing yards after contact (652). Mixon earned nearly four targets per game in year two and maintains growth potential in the passing game, where his college film was dazzling. Mixon’s ceiling is lofty as the Todd Gurley in ex-Rams assistant Zac Taylor’s offense, which should highlight Mixon’s versatility. Unfortunately, the Bengals’ early-camp losses of LT Jonah Williams (shoulder, I.R.) and LG Clint Boling (retirement) combined with Green’s injury took some wind out of Mixon’s upside sails.

As Mixon played the NFL’s 13th-most running back snaps despite missing two games and parts of others last season, mere scraps were left for backup Giovani Bernard. And as Bernard’s pair of spot starts in Mixon’s place were underwhelming, the Bengals drafted two running backs in Texas A&M production-engine Trayveon Williams and injury-propense Oklahoma phenom Rodney Anderson. Bernard looks to be nearing his expiration date in Cincinnati after setting career lows across the board in 2018.

The Bengals’ Win Total is six games, a mark they’ve exceeded just once in the last three seasons in large part due to injuries. Andy Dalton missed five games with a torn thumb ligament last season. A.J. Green missed seven games with a toe sprain and six with a hamstring strain in 2016. Tyler Eifert has played more than eight games once in the last five years. The Bengals should also experience positive close-game regression after going 2-5 in one-score contests last year. Facing the league’s 14th-softest schedule via Opponent Win Totals, I like Cincinnati to top six wins even after a tumultuous beginning to training camp.