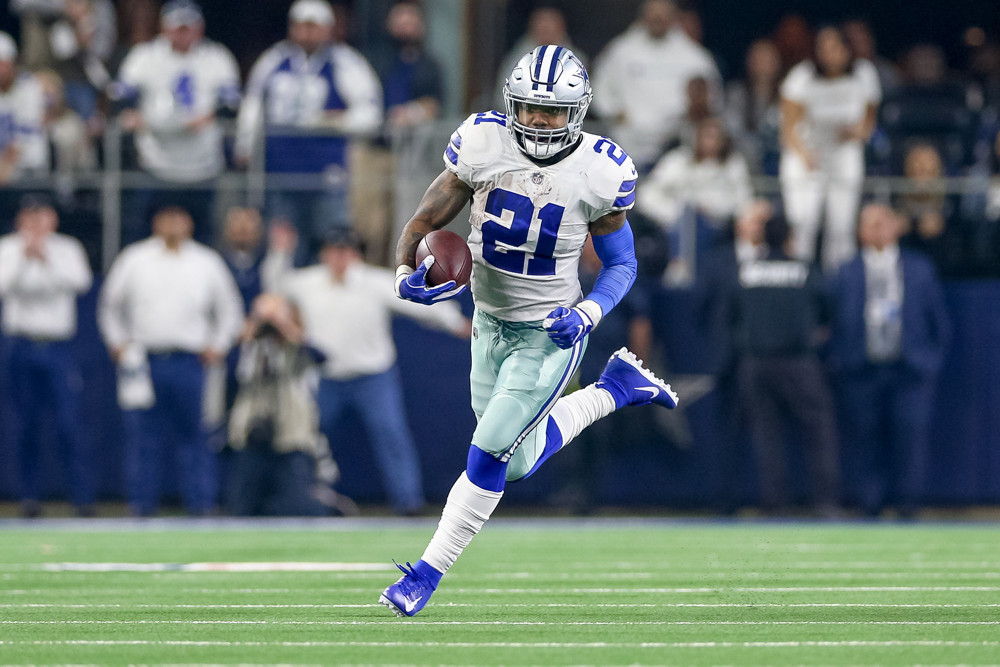 Acquired from Oakland for what became the 27th overall pick (SS Johnathan Abram), Amari Cooper injected immediate dynamism into a 2018 Cowboys offense that had gone boringly stale. Long criticized for his unsure hands, Cooper dropped just 4-of-94 targets and posted a mouth-watering 96/1,303/10 (13.6 YPR) full-season receiving pace across 11 games, including the playoffs. This is Dak and Cooper’s first offseason together, and both are in contract years. Still only 25 – Cooper just turned in June — all signs point to a breakout season as the Cowboys’ clear-cut passing-game focal point. Since the 1970 AFL-NFL merger, only six players have logged more receiving yards before age 25 than Amari’s 3,908. Dak-Cooper stacks in best ball and DFS deserve to be popular against Dallas’ soft Weeks 1-6 pass-defense slate.

The Cowboys took a one-year, $5 million flyer on Randall Cobb, who wore out his Green Bay welcome due to repeated nagging injuries. Hamstring woes and a concussion cost Cobb seven games in 2018, and his balky ankles are longstanding. Cobb’s receiving line is a pedestrian 68/665/5 (9.8 YPR) over his last 16 games. His chances at fantasy relevance are low as the run-first Cowboys’ fourth pass option.

At age 37, Jason Witten returns from the Monday Night Football booth for what’s expected to be a lead timeshare role ahead of H-back Blake Jarwin and block-first sophomore Dalton Schultz. OTA reports suggested Witten looked fluid after taking 2018 off, and he reportedly ran his best-ever 20-yard split early in the spring. A catch-and-fall guy in 2017, Witten set career lows in yards per catch (8.9) and yards per target (6.4). He’s a low-ceiling TE2/3 limited to best-ball and tight end-premium leagues.

Ezekiel Elliott led the NFL in rushing yards per game for the third straight year and shattered career highs in targets (95) and catches (77) as the Cowboys smartly featured Zeke in the passing game for the first time. Elliott logged a career-high 381 touches, and there’s reason to believe he has a future 400-touch season in him. Zeke also benefited from the Cooper trade, averaging 37.6 more total yards and 7.0 more PPR points in eight games with Amari. Returning is All-Pro C Travis Frederick, PFF’s No. 2 run-blocking center in 2017 before he missed 2018 due to Guillain-Barre Syndrome. Off the field, Elliott was cleared of NFL discipline after bumping a security guard and getting handcuffed at a Las Vegas concert in May. Elliott did not report to training camp on time in seek of a lucrative long-term extension, however, at least temporarily removing him from consideration as this year’s 1.01 fantasy pick.

The Cowboys’ Win Total opened at 9.0 games, a number they matched or beat in four of the last five seasons. Last year’s team caught positive variance by going 8-3 in one-score games to finish 10-6 and advance to the Divisional Round with a two-point win over Seattle. Dallas’ +15 point differential was still far from dominant, and they outkicked their Pythagorean Win Expectation by 1.6 to 2.4 games. Jason Garrett’s club does draw 2019’s tenth-softest schedule based on Opponent Win Totals, and the roster looks like a top-ten group with an abundance of ascending talent. I’m leaning toward the over on nine wins.