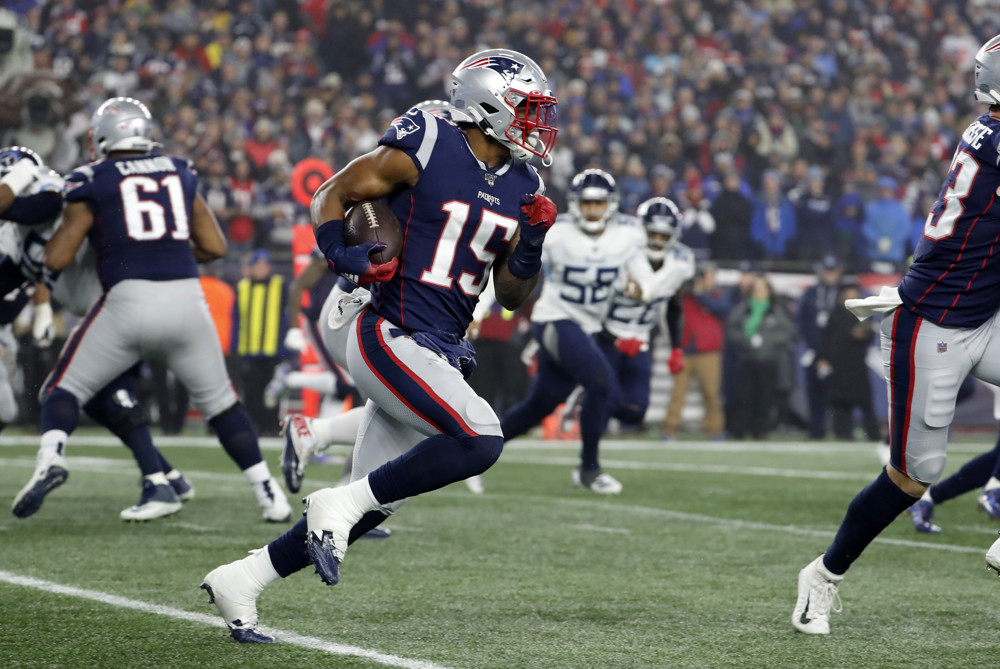 Adam recently covered a dozen winners from the action packed start of Free Agency. But because this has been such a wild start to the league year, we’re diving deeper with some additional winners to keep in mind for your Best Ball and Dynasty drafts.

1. Will Fuller, WR, HOU
Hopkins departure opens up a ton of targets in the Houston offense –150 to be exact. And while Kenny Stills and the newly signed Randall Cobb also stand to benefit, Will Fuller has the highest ceiling following Hopkins’ unexpected trade.

In 2019 Fuller recorded yet another instance of what we may soon be calling “the Will Fuller”: A highly effective but injury-shortened season. Fuller tied for 17th among WRs in Yards per Route Run last year with D.J. Moore and Kenny Golladay. And he finished 15th in the predictive metric in 2018. Moreover, since 2017, Deshaun Watson has averaged 8.7 Yards per Attempt in 22 games with Fuller but just 7.3 YPA in 16 games without him. And he’s thrown TDs at nearly twice the rate with Fuller in the lineup.

Long story short, Will Fuller is good at football. And while his injury history is definitely a concern, it has historically been factored into his price. In fact, although it’s too early to know for sure, Fuller’s price does not seem to be dramatically increasing, despite the much larger target share now available in 2020.

2. N’Keal Harry, WR, NE
You already know that N’Keal Harry had a bad rookie season. But do you remember how bad it was? Among the 19 rookie WRs who saw at least 20 targets last year, Harry bested only KeeSean Johnson in YPRR. And he was dead last among the group in Yards per Target. In fact, his 4.6 YPT ranked 129th among WRs, and was worse than 54 TEs and 52 RBs. So I feel safe saying that he and Tom Brady did not have a connection.

Luckily that is now a moot point, with the longtime face of New England now in Tampa Bay. And while it may not seem particularly bullish for Harry that the Patriot’s QB situation is a total question mark, keep in mind that before Brady’s departure he was actively campaigning the Patriots to add new weapons.

Harry will only rehab his value with targets, and he wasn’t going to get very many from Tom Brady. Now, at  the very least, Harry should see a larger role in the 2020 offense. And Brady’s departure also has the potential to lower Harry’s price even further, if drafters become skittish of the Patriot’s new look offense. And though we’re working off of small samples, so far it does seem that Harry’s price is dropping.

However, we need more reason to buy a player than just a cheap price and a new QB. That reason is Harry’s prospect profile. Which, because Harry is entering his second year, still impacts his likely outcomes. And that’s great news for his owners, because Harry was a borderline elite WR prospect.

Harry began his NFL career at just 21 years old, after back to back 1000+ yard, 8+ TD seasons. In that 2 year stretch he accounted for 36% of Arizona State’s receiving yards and 42.5% of their receiving TDs. For his career he accounted for over 30% of his team’s receiving yards, which is a rare feat for a player so young. Harry was then drafted in at pick 32, confirming that the NFL saw him as a high level WR talent. With a reduced price and clean slate I’m willing to bet that Harry follows in the footsteps of Davante Adams and DJ Chark, two very strong prospects who rebounded from inefficient and unproductive rookie campaigns.

3. Chase Edmonds, RB, ARI
Kenyan Drake is the most obvious beneficiary of David Johnson’s trade (other than Steve Keim), but Chase Edmonds should now be back on your draft radar as well. Because, although very efficient, Kenyan Drake is anything but a workhorse back.

I’m sure you realize that Drake has been used sparingly throughout his career, but it’s amazing just how limited his usage has been. Drake has gone over 20 carries just twice in his entire 62 game career. This sparse usage goes back to his days at the University of Alabama, where in 38 games he logged 15 or more carries… zero times. Not one time. In 38 games. His “peak” usage came against Kentucky as a Sophomore where he had 14 rushing attempts and 3 receptions.

I’m not actually trying to tear down Drake’s 2020 prospects. Arguably Drake is better off seeing less touches, as long as he remains a key component of the passing game. But even with Drake’s added work in the receiving game, he’s never come close to being a workhorse. On career high usage in 2019, his total touches ranked just 25th in the NFL.

But can Edmonds actually do anything with Drake’s leftover touches? His 2019 performance indicates that he can. Edmonds’ 2.1 yards after contact per attempt was the best on the team, exceeding Drake (2.0), and David Johnson (1.8). And his 9 YAC per reception also bested Drake (8.5) and Johnson (6.2). Granted, his 1.04 Yards per Route Run was just average for a RB, but it wasn’t far off Drake’s 1.11. (For comparison, Austin Ekeler led the league with 2.74 and Carlos Hyde finished last with 0.20)

4. Nyheim Hines, RB , IND
Free Agency brought Hines Philip Rivers, and with him, a whole bunch of dump off passes. And although Hines is unlikely to turn out to be the next Austin Ekeler, he did quietly improve in his second season. In 2019 he jumped from RB38 to RB23 in YPRR, increased his YPR from from 6.7 to 7.3, his YPT from 5.2 to 5.5 and his YAC per Reception from 5.5 to 7.2. He also broke the same number of tackles despite seeing 52 fewer touches. Ultimately none of these improvements mattered for fantasy purposes because of those 52 fewer touches, which deprived him of any meaningful fantasy value. His opportunity could be swinging the other way however, now that Philip Rivers is under center.

Last year all Colts RBs combined for 91 targets. Last year Ekeler alone had 108, and Rivers’ RBs have combined for at least 100 targets in every season since he became a starter in 2006. I don’t see that streak breaking this season.

5. Parris Campbell, WR, IND
I’ve covered that Rivers likes to throw to his RBs. But he also enjoys throwing short passes to WRs. Notably, Rivers’ top target Keenan Allen recorded an aDOT below 10 in four of his six seasons with Rivers and has yet to surpass his rookie season aDOT of 10.4. Parris Campbell now looks like a natural fit for this role, with a 2019 aDOT 8.2, while running 48% of his routes from the slot (just below Allen’s slot percentage of 52%). It’s possible that T.Y. Hilton fills this role as, frankly, the better player. But Hilton hasn’t been featured in the slot since 2016 and he’s never recorded an aDOT below 10 since entering the league in 2012. So Campbell should at least carve out a piece of this role.

But like Harry, Campbell had a brutal rookie season, recording just 40.1 PPR points on a measly 24 targets over 7 games. But when Brissett occasionally did look his way, Campbell wasn’t actually bad. His PPR points per target of 1.7 was a respectable mark. Davante Adams, Allen Robinson and Robert Woods put up the same PPR points per target in 2019 for example–albeit on much larger target workloads. Additionally, we now know that Terry McLaurin is no slouch. Yet in their final season together at Ohio State (when they were both 22 year old Juniors), Campbell was able to account for 21% of the receiving yards to McLaurin’s 15%. and accounted for the same percentage of TDs (24%). I’m not saying that Campbell is better, or even as good as McLaurin. But it seems unlikely to me that he simply can’t play after outproducing the breakout rookie just two years ago.

6. Alan Lazard, WR, GB
Alan Lazard, a 2018 UDFA who didn’t get much playing time until mid-season last year, seemed unlikely to remain a starter in 2020. But the first wave of free agency has left Lazard’s starting role intact. And the Packers also failed to add Austin Hooper, who likely would have functioned as the second option in the offense. And umm… Lazard wasn’t bad last year.

Are you excited about what Diontae Johnson, Preston Williams or Darius Slayton showed as rookies? Well Lazard bested all of them in YPRR. What about Will Fuller? Well on on the same aDOT as Fuller, Lazard posted a RACR just a hair less efficient. And he was more efficient than stud deep threats like Mike Evans and John Brown.

Lazard is also far cheaper than any of the other names I’ve mentioned here. He’s barely being drafted in FFPC startups and frequently falls outside of the top 250 of FFPC best ball leagues. But he has NFL athleticism (4.55 40, 38″ vert) and plus size (6’5″, 227), and currently has a starting role in a productive offense. The odds just increased that he keeps it.