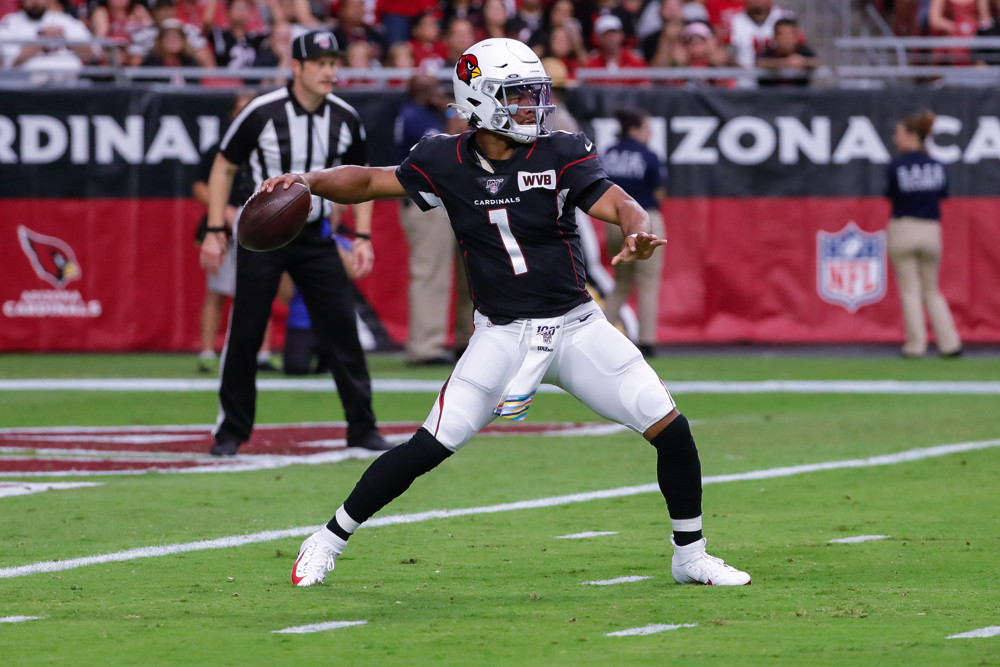 On this week’s podcast, you can hear Evan and I break down all the important transactions in full. For this article, I wanted to boil it down to the players I think gained the most value over the last three days. I’ll keep updating this as more news comes in. I also highly recommend reading Evan’s Free Agency Tracker as he has blurbs on every single move so far.

1. Kyler Murray, QB, ARZ
Kyler was dumped into a very difficult situation last season. He was a rookie playing for a rookie head coach trying to run a 4-WR, up-tempo base for the first part of the year. That kind of Air Raid offense is extremely fantasy friendly, but Murray was asked to run it with very little weaponry. In reality, executing this scheme with the likes of Damiere Byrd, KeeSean Johnson and washed Larry Fitzgerald as your “weapons” is not practical. By the end of the season, Kliff Kingsbury had scrapped his 4-WR base sets, slowed down, stuck a tight end on the field and gone to an “11” base. And through all that, Kyler still finished as fantasy’s No. 12 QB in fantasy points per game.

So by adding DeAndre Hopkins, Murray immediately gets a big injection on two fronts. First, Hopkins’ unique contested-catch ability, catch radius and raw talent is a QB’s dream. And second, the Cardinals will be able to run something closer to the scheme Kingsbury envisions. If they can get a second-year leap from talented Andy Isabella or make a splash at WR in the draft, Murray will get an even bigger boost.

2. Adam Thielen, WR, Vikings
Stef Diggs complained his way out of Minnesota and is now a Buffalo Bill. That leaves Kirk Cousins with very little behind Adam Thielen. They’ll likely use some draft capital on the wide receiver position, but for now we’re looking at the likes of Bisi Johnson and Chad Beebe. Thielen had a disastrous 2019 campaign as he was hobbled by injury, but posted 91 catches in 2017 and 113 in 2018. Whoever replaces Diggs is unlikely to command the 8.1 targets per game he saw over the last two years. Expect Thielen to be a target magnet and push toward 160 targets in 2020.

3. Kenyan Drake, RB, ARZ
The Cardinals slapped Drake with the Transition Tag, meaning he’ll be on a 1-year deal worth around $8.5M in 2020. It’s a sizable commitment to the running back position, but one Drake earned down the stretch last season. He quietly caught 28 passes in eight games, ripped off 5.2 yards per carry and scored eight rushing touchdowns. David Johnson was dumped on the Texans, leaving only Chase Edmonds behind Drake. As the feature back in one of the NFL’s best run games and an excellent pass-catcher, Drake drips with upside now.

4. Hayden Hurst, TE, Falcons
The Falcons were ready for the loss of unrestricted free agent Austin Hooper. Soon after Hooper signed with the Browns, the Falcons sent a second-round pick to the Ravens in exchange for Hayden Hurst. Hurst is a serious prospect – a 2018 first-round pick of the Ravens who racked up 92 catches in his final two college seasons. He was simply blocked in Baltimore by one of the league’s best pass-catching tight ends (Mark Andrews) and one of the best blocking tight ends (Nick Boyle). In Atlanta, Hurst will be given the Austin Hooper role on a silver platter. That resulted in 7.5 targets per game and nine targets inside the 10-yard line (T-8th in the leagues).

5. Blake Jarwin, TE, DAL
The Cowboys finally got rid of their nostalgia and moved on from washed Jason Witten, who signed with the Raiders. In the same breath, they gave Blake Jarwin an eye-opening 4-year, $24.5M contract extension in restricted free agency – something they didn’t need to do to retain him. They clearly think highly of the 25-year-old who was 8th in yards per route run among tight ends last season, behind only George Kittle, Mark Andrews, Tyler Higbee, Will Dissly, Darren Waller, Travis Kelce and Jared Cook.

With Randall Cobb and Witten now gone, there are paths to a significant role change for Jarwin. At a minimum, he’ll have a rotational role in what projects as one of the league’s best offenses. Dak Prescott, Amari Cooper, Michael Gallup, OC Kellen Moore and a still very elite o-line gives Dallas an excellent shot to lead the NFL in yards per play for the second straight year.

6. Derrick Henry, RB, TEN
The Big Dog has a very specific skill set. There aren’t many teams or coaches who can build an offense around a power running back who needs 20+ carries a game and commit to it weekly. We know that the Titans can and will, so them retaining Henry via the Franchise Tag was a best-case outcome for his fantasy value. Especially after Ryan Tannehill was also retained via a $118M contract, it’s easy to project Henry’s role. He is still a candidate to be overdrafted as owners remember his late-season explosion and ignore that the lack of pass-game ability massively lowers game-to-game floor. But Henry’s full-season projection is better in Tennessee than anywhere else.

7. Whoever ATL drafts or signs at RB
The Falcons cut Devonta Freeman, leaving only replacement-level talents like Brian Hill and Ito Smith at running back. Assuming they don’t sign someone like Melvin Gordon, they’re a prime candidate to use significant draft capital at the running back position. If and when that happens, that rookie will project as the lead back for an offense which has paths to a bounce-back year. The return of OG Chris Lindstrom and Year 3 breakout for Calvin Ridley are plus assets.

8. Teddy Bridgewater, QB, Panthers
Teddy did enough in relief of Drew Brees last season to land a starting job – and a $60M contract. The Panthers are moving on from Cam Newton and installing the far less mobile but far more accurate Bridgewater as their starter. Teddy was a checkdown king for the Saints last season, easily posting the NFL’s lowest aDOT but completing an elite 67.9% of his passes. Some of that was by design as Drew Brees sports similar shallow passes/high completion rate numbers. In Carolina, Bridgewater is at least a mild improvement on Kyle Allen and has serious weaponry in Christian McCaffrey, DJ Moore, Curtis Samuel and Ian Thomas.

9. Tom Brady, QB, Bucs
Brady is 43 years old and a shell of his former self. He also had such poor weaponry lately in New England that the team was forced to adopt a game-manager, ride the defense philosophy. That isn’t the case in Tampa, where he has two of the best wide receivers in the NFL plus raw potential in OJ Howard. While Brady’s limitations and lack of mobility won’t make him a strong quarterback option, he’s in a far better spot than he was in New England.

ALSO
Kenny Stills, WR, Texans — DeAndre Hopkins leaves behind the most voluminous role in the NFL as he often topped a 30% target share. For now, the 3-WR set will be oft-injured burner Will Fuller, washed slot man Randall Cobb and Kenny Stills. While Stills massively disappointed while filling in for Fuller last year, a full offseason to prepare as Hopkins’ replacement is intriguing.

Tyrod Taylor, QB, Chargers — Latest reports say the Chargers won’t add a veteran. We’ll see what they do in the draft, but for now we can pencil the artist formerly known as TyGod as the Week 1 starter. Keenan Allen, Mike Williams, Hunter Henry and Austin Ekeler is an elite supporting cast.

Miles Sanders, RB, Eagles — Removing Jordan Howard (signed with Miami) from the backfield means Sanders’ likely backfield mate is Boston Scott. Sanders has all the goal-line work in his sights.