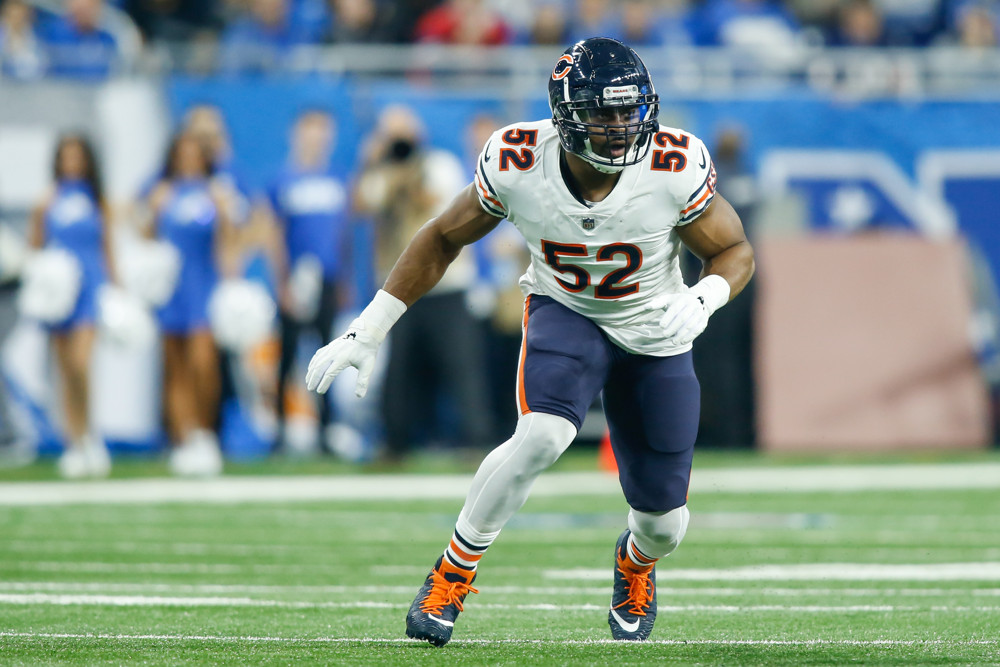 Overview: The Bears are the obvious cream of this year’s D/ST crop after outscoring last year’s field by a whopping 28 points despite debilitating high ankle sprains to top pass rusher Khalil Mack and ballhawk FS Eddie Jackson. While some regression should be expected downgrading from DC Vic Fangio to Chuck Pagano, this defense remains the most talented in the NFC, and Cordarrelle Patterson adds serious juice to Chicago’s kickoff-return game. Tarik Cohen is similarly dynamic on punt returns. This is probably the only D/ST I would consider a true every-week starter regardless of opponent.

Overview: The Eagles finished as a top-seven D/ST in two of the last three years and sport especially loaded personnel this season with DT Malik Jackson and WLB Zach Brown joining the defense while DE Derek Barnett, FS Rodney McLeod, CB Ronald Darby, and NT Timmy Jernigan return from injury-affected years. Philly is my NFC Super Bowl pick, so I expect them to spend most of the season playing with leads, increasing sack chances. The Chargers field the AFC’s most-talented defense with DE Joey Bosa, MLB Denzel Perryman, and RCB Trevor Williams back healthy, although dynamic SS Derwin James’ foot injury hurts. The Rams lack intimidating EDGE rushers and lost DT Ndamukong Suh, but the’ve finished as the DST2 and DST3 through two years under DC Wade Phillips. Offensive improvement should boost the Jaguars’ D/ST following a lackluster 2018. Kentucky EDGE Josh Allen fell to them as a gift at the No. 7 overall pick in April’s draft.

Overview: Minnesota returns 10-of-11 starters from last year’s top-ten D/ST, and Mike Zimmer’s defense consistently delivers in the sack column. Year over year, the Vikings are a bankable unit. Facing the Bills, Jets, and Dolphins twice always bodes well for New England, which produced last year’s DST7 and returns one of the best secondaries in the league. I don’t expect a big drop off from free-agent loss DE Trey Flowers to Michael Bennett. It’s fair to question Baltimore’s pass rush after Terrell Suggs and Za’Darius Smith’s departures, but Earl Thomas’ addition completes arguably the most-dangerous defensive backfield in the sport. I’m obsessed with Dallas’ early-season schedule. You can usually get them in the last round of drafts, and they face the Giants, Redskins, and Dolphins in Weeks 1-3.

The Steelers are capable of contending for the league lead in sacks, and early returns on Ryan Shazier replacement Devin Bush are exceedingly promising. Vic Fangio coaching Bradley Chubb and Von Miller has scary upside in Denver. The Packers went all out to restore their pass rush, signing Za’Darius Smith and Preston Smith and drafting Rashaan Gary with the 12thoverall pick. Kansas City finished as last year’s DST3 despite not fielding an actually-good real-life defense. But they led the NFL in sacks, capitalizing on playing with so many leads. I doubt they’ll get back there, but the additions of DE Frank Clark and FS Tyrann Mathieu help. The Bills play solid defense but haven’t been a great fantasy D/ST, ranking 14th, 15th, and 20thin scoring over the past three years.

Overview: The Saints, Browns, and Falcons are good teams that should play with leads more often than not, thereby enhancing their fantasy defense projections. New Orleans and Indianapolis are already there in terms of having strong rosters that translate to in-game lead grabbing, while Cleveland and Atlanta are going to be much better 2019 teams. Signing DT Gerald McCoy and landing explosive EDGE Brian Burns with the 16thpick raises Carolina’s pass-rush expectation after a miserable 2018 season in that department. The Texans play in shootouts, but that can be a good thing for their D/ST. They return J.J. Watt and Whitney Mercilus, who are both capable of double-digit sacks. The Lions added DT Mike Daniels, DE Trey Flowers, and CB Justin Coleman in hopes of becoming a defense- and run-oriented team. I’ve criticized Matt Patricia’s team-building acumen, but must say I was impressed with his 2018 scheme. And Detroit’s personnel is much better this year.

Overview: These are toward-the-bottom defenses with minimal appeal outside of best-ball leagues where you have to draft multiple D/STs. Tennessee has an actually-solid defense but probably won’t play with many big leads. The Seahawks have been ransacked by injuries and suspensions. Andrew Luck‘s retirement hurt the Colts’ fantasy defense nearly as much as their offensive skill-position players. The Jets are lacking at outside pass rusher and throughout the secondary. The Bengals’ defensive personnel isn’t bad, but their injury-decimated offense complicates matters. Arizona probably won’t be anywhere close to useful until Patrick Peterson returns from his six-game suspension, and they lost No. 2 CB Robert Alford to a severe leg injury in the preseason.