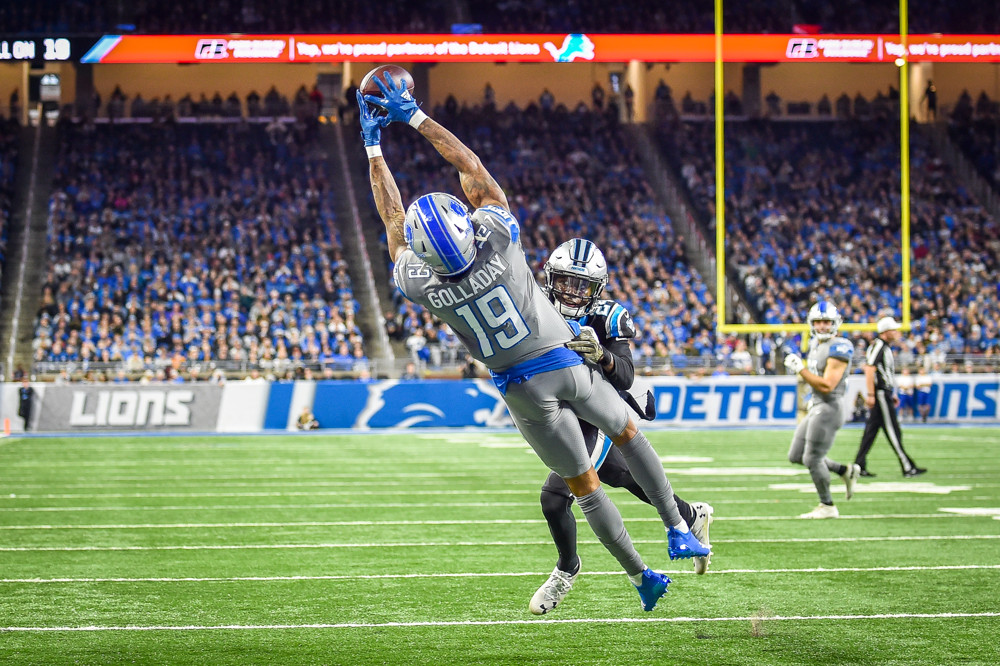 Kenny Golladay capitalized on the pre-Week 9 Golden Tate trade and Week 10 knee injury that ended Marvin Jones’ season, nearly doubling his per-game target average from 5.3 in Weeks 1-9 to 10.1 in Detroit’s final seven games. Golladay dropped just 3-of-119 targets and finished top ten in the NFL in 20-plus-yard receptions. As a second-year pro, only 13 wide receivers logged more yards than Golladay’s 1,063. Although the Lions are missing the NFL’s sixth-most targets from last year’s team, the departures accounted for only the 13th-most available Air Yards because they consisted of short-area possession throws to the likes of Tate, Bruce Ellington, and tight ends. A downfield threat, Golladay finished No. 9 in the league in Air Yards (1,530). Golladay’s biggest obstacles for a third-year leap are Jones’ target-sponging return, Danny Amendola and T.J. Hockenson’s additions, and Bevell’s run-heavy approach.

Marvin Jones was on pace for a 62/903/9 receiving line before last year’s right knee injury ended his season, requiring surgery and knocking Jones out of 2019 OTAs. He is fully expected to be ready for Week 1. At the time of Jones’ injury, he had out-targeted Golladay 62 to 61 but had 93 fewer yards. Now 29 years old, Jones seems likely to settle in as the Lions’ No. 2 receiver in a passing game increasingly squeezed for targets based on personnel and philosophy. Jones is best viewed a low-ceiling WR3.

Danny Amendola signed a one-year, $4.5 million deal to operate as Detroit’s low-rent slot replacement for Golden Tate. Even going on age 34, Amendola remains a trustworthy interior-possession option after commanding per-game target averages of 5.7 and 5.3 with the Patriots and Dolphins the last two years. Amendola’s chances at earning fantasy relevance are slim, but he’ll pull opportunity away from others.

At No. 8 overall, the Lions made T.J. Hockenson the NFL’s highest-drafted tight end since Vernon Davis (No. 6 in 2006) after Hockenson earned the Mackey Award as a redshirt sophomore, then blazed 4.7-flat with a 37 ½-inch vertical at the Combine. Hockenson learned to block in Iowa’s old-school offense and drew pre-draft Travis Kelce comparisons as a receiver. The Lions gave Jesse James a surprisingly rich four-year, $25 million deal, but he is primarily a blocker. Hockenson should earn near-every-down duties soon, but the unproductive history of rookie tight ends keeps his projection in the mid- to late-TE2 area.

Powerhouse C.J. Anderson, lifelong Lion Zach Zenner, and sixth-round pick Ty Johnson are candidates to spell Kerryon. Anderson landed only a one-year, $1.5 million deal with $450,000 guaranteed despite topping 120 yards rushing in 3-of-5 games with the 2018 Rams. Zenner is a jack of many trades but master of none. Undersized (5’9/205) but highly explosive, Johnson averaged 7.0 career yards per carry at Maryland before blazing 4.45 at the Terrapins’ Pro Day. Johnson should be an especially fun preseason DFS play with an outside chance to carve out a pace-change/passing-game role in Riddick’s wake.

The Lions’ Win Total is 6.5, a number they topped in five straight seasons before Matt Patricia’s Detroit debut fell short at 6-10. Last year’s team did undershoot its Pythagorean Win Expectation by 1-3 games, going 2-4 in one-score affairs and falling apart on offense due to injuries. DE Trey Flowers, slot CB Justin Coleman, and first-round TE T.J. Hockenson look like early-impact additions, while Marvin Jones and Kerryon Johnson return healthy to restore Detroit’s juice on offense. Facing a schedule that ranks middle of the pack based on Opponent Win Totals, I like the Lions’ chances of winning 7-8 games. Over.