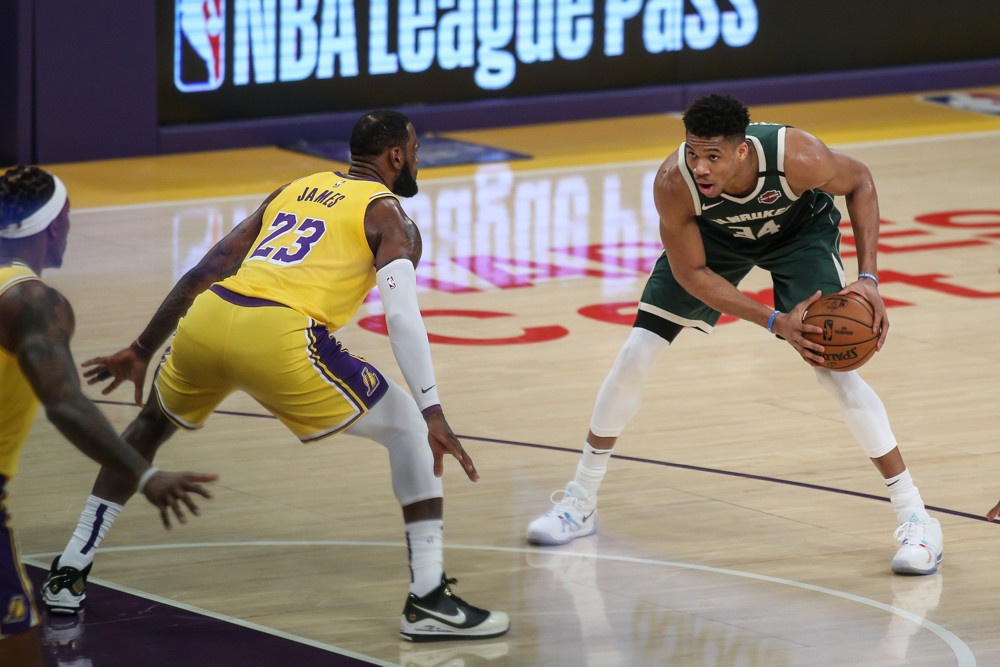 Editor’s Note: We may not write up every player we consider to be a top play. Be sure to consult the chart at the bottom of the page. This page will be updated as news breaks. Please refresh this page for adjustments and notes on injuries.

UPDATE 3:18 PM ET: Patty Mills is going to get some minutes today. The paths for value are still there for all the Spurs options but we did adjust them slightly down the preferences in the top plays sections. Keldon Johnson would seem to be the most vulnerable but we think Mills presence cuts a minute or two from Derozan, Murray, White, Gay, Johnson, and Walker – basically everyone loses a little projected playing time and becomes slightly worse. In terms of managing your exposure you might want to just straight swap similar options IF you have too many Spurs going. So if you have Murray-Walker-Keldon on DK maybe move Walker or Keldon to a Zach Collins – small changes that adjust your risk a bit.

The optimal GPP lineup will mix some of these cash-type plays with higher-variance options. In cash games (where roughly 50% of the field gets paid out), we don’t worry about ownership or game stacks or correlation. In large-field tournaments, our ACO (average cumulative ownership) should stay reasonably low.

Russell Westbrook ($9,900 DK/$9,900 FD) – Any concerns about playing time limitations were thrown out the window in Houston’s restart opener as Westbrook played over 38 regulation minutes and nearly 44 in total. The Bucks are an interesting matchup for Westbrook as their affinity for pace certainly suits him but their strong rim protection and Top-10 defense against the point guard position is a challenge. The good news for Westbrook is the price tag which has dipped below $10,000 on both sites. With a ton of value on the slate and Westbrook’s price tag down, he’s a compelling cash game target. This is especially the case on DraftKings where his affinity for double-doubles and triple-doubles elevates his ceiling.

Dejounte Murray ($6,000 DK/$5,700 FD) – Murray was overshadowed by Derrick White’s monster performance on Friday as Murray battled foul trouble and was limited to just 21 minutes overall. A deeper look at the substitution patterns for Murray before the foul trouble reveals some massive upside. Murray played the first 6:40 before resting for three minutes and then played another 5:40 stint before picking up his third foul and sitting the remainder of the first half. We’re thinking the plan may have been for Murray to play 16-18 of the first 24 minutes with rotations of 6 on, 3 off, 6 on, 3 off, 6 on. He then picked up his 4th foul just 30 seconds into the 3rd quarter and his 5th foul just 2.5 minutes into his next rotation. Given Murray’s mostly known for minutes restrictions and strong fantasy point per minute production, the 21-minute box score might discourage investment. We view this as a great time to invest with the price down and all the attention on Derrick White.

James Harden ($11,100 DK/$10,900 FD) – Harden played 38.5 minutes in the restart opener and delivered a monstrous line that separated him from the other top options on Friday. The matchup against the Bucks wing defense is a much more challenging one (fourth in overall backcourt defensive efficiency) but Harden is once again in play as the top projected shooting guard option in the premier game environment on the slate.

Caris LeVert ($7,800 DK/$7,800 FD) – LeVert struggled against a good Orlando defense in a game that he saw his minutes limited by a blowout. This will happen at times with Brooklyn’s thin roster too reliant on LeVert to stay competitive but we get a premier bounce-back spot on Sunday. The Nets are actually 3.5 point favorites against a depleted Wizards roster. LeVert was on pace for 33-34 minutes and had the rates we expected (34.1 usage, 37.8 assist rate). The Wizards lowly defense ranks 28th on the season in defensive efficiency against opposing guards. This is a tremendous spot for LeVert to deliver on the scrimmage hype.

Giannis Antetokounmpo ($11,000 DK/$11,200 FD) – Giannis played his normal first half rotation against Boston but then closed by playing nearly 14 of the final 15.5 minutes. He ended up with 32 minutes and any time we can project Giannis into the 30s, he’s likely going to be the leading fantasy scorer on the slate. A ridiculously efficient and overtime game got Harden past Giannis but we don’t expect that to be the case today. The Rockets lack rim protection and size to matchup against Giannis’ relentless drives. He’s your priority spend on this slate and we’d make sure to emphasize him in cash games on both sites.

Joe Harris ($5,800 DK/$5,000 FD) – The Nets rolled out a starting lineup that featured two really low usage options in Lance Thomas and Chris Chiozza which funneled most of the opportunity to LeVert, Harris, and Allen. Harris played 17 first-half minutes and jacked up six threes in the game as a whole. If the Nets are to meet their 119.25 implied total, Harris is going to need to do some damage.

Troy Brown Jr. ($4,500 DK/$4,900 FD) – One of our favorites from Friday’s slate also battled foul trouble. Similar to Dejounte Murray we get a nice bounce-back spot after the underlying rotations suggested big minutes upside. Brown played the first 10 minutes of the 1Q and the last 10.5 minutes of the 4Q. In between, he garnered just 6.5 minutes because of foul trouble. The mid-30s minute upside is certainly there and the price tag is one he can beat easily. Throw in a matchup against the Nets and Brown is a clear buy.

Keldon Johnson ($3,000 DK/$3,500 FD) – The Spurs rotation had already lost Bryn Forbes to injury and added Marco Belinelli to the group on Friday. Keldon Johnson saw 30 minutes off the bench in that game and delivered on his measly price tag. We expect Belinelli’s minutes to get filled by bigger lineups (Drew Eubanks most likely) against a bigger Memphis team but the opportunity to approach 30 should still be there for Johnson. A matchup with backup wing Josh Jackson is one that can really bring out steals-blocks upside for a player that has averaged 2.1/36 minutes in his young career. Johnson isn’t quite necessary in cash games but is viable there if you find yourself in need of a punt.

Robert Covington ($6,400 DK/$5,900 FD) – Covington’s price did increase after a stellar performance against the smaller Mavericks. This is a much tougher matchup as Covington comes with some foul risk as a likely primary option against Giannis Antetokounmpo. If Covington can stay out of foul trouble, the upside is certainly there against a team defense that funnels opponent three-point attempts. Covington shot 1-9 from three-point range last game and had over 47 FanDuel points.

Jaren Jackson Jr. ($5,200 DK/$5,900 FD) – Jackson was one of our primary targets on Friday and he delivered as he managed to avoid his own foul trouble and benefit from the foul trouble Jonas Valanciunas got into. Jackson played an incredible 38 regulation minutes after playing over 18 1H minutes. It’s difficult to count on big minutes from Jackson given his foul history but a matchup against the Spurs should be another one to attack. Without LaMarcus Aldridge the Spurs are using DeMar DeRozan as their primary power forward. Jaren Jackson has five inches on DeRozan and 20 pounds and would figure to be the easiest place for the Grizzlies to target for offense given the strong guard defenders on the Spurs roster. Fire up Jackson again in all formats.

Jarrett Allen ($5,600 DK/$6,500 FD) – Allen looked like a slate breaker in the 1Q of the opener against the Magic but struggled to generate fantasy production in the second half before getting his final rotation cut short due to a blowout. The matchup last time out was against a borderline Top 10 defense against centers this season (Magic rank 11th in defensive efficiency against the position) but today he’ll draw the Wizards who rank 29th. This is another bounce-back spot for Allen in a great game environment.

Thomas Bryant ($4.800 DK/$5,400 FD) – Bryant played 33 minutes in the opener which pushed aside any playing time concerns with him and Moritz Wagner splitting the center spot. Playing time has always been the primary impediment to Bryant’s value as he’s now posted consecutive seasons of 40+ DraftKings points per 36 minutes. We don’t expect 33 minutes to be the new baseline but even an unleashed version of Bryant that approaches 30 regularly will be a strong value at these mid-tier price tags. Now Bryant squares off with Brooklyn who ranks 28th in defensive efficiency against the center position. 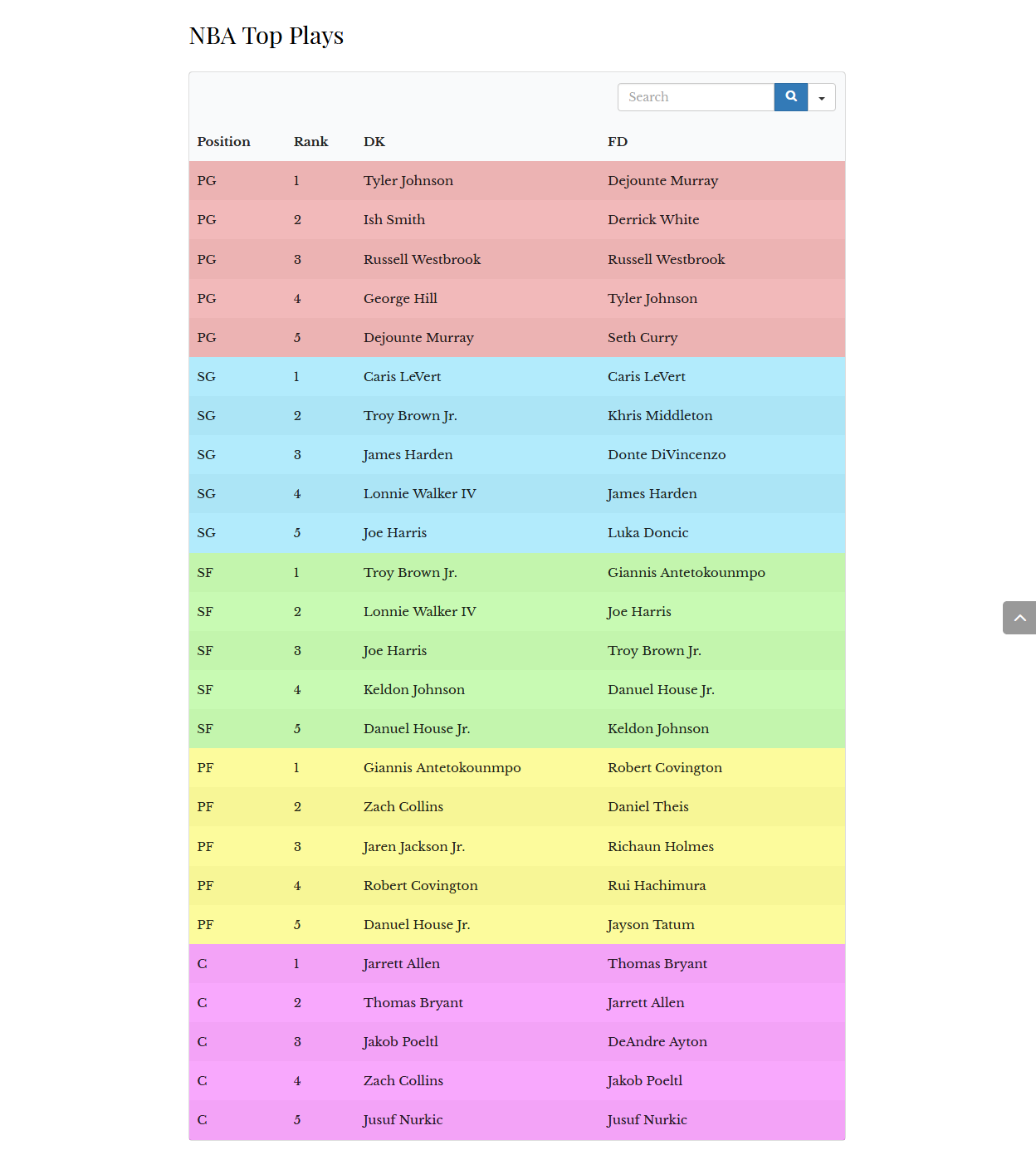