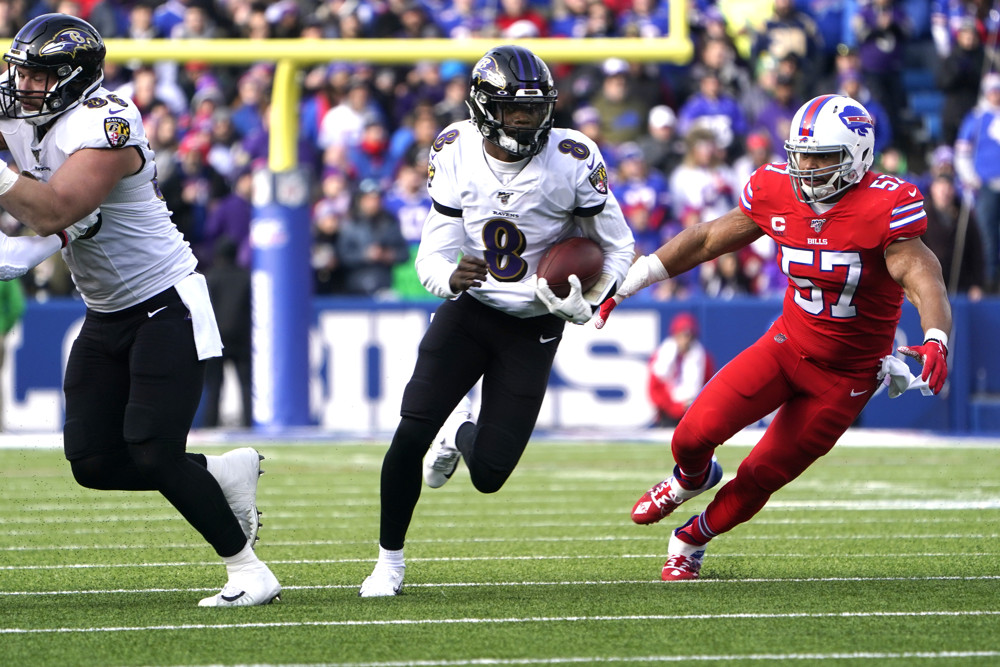 The optimal GPP lineup will mix some of these cash-type plays with higher-variance options in correlated lineups. In cash games (where roughly 50% of the field gets paid out), we don’t worry about ownership or game stacks or correlation. In large-field tournaments, our ACO (average cumulative ownership) should stay reasonably low. Please read this article and listen to Episode 102 of the podcast for more on large-field tournament strategy.

QUARTERBACK
Lamar Jackson ($8100 DK, $9400 FD) — No reason to think Lamar slows down this season as the Ravens return their HC, OC, all skill players and 4-of-5 offensive linemen. He’s easier to fit on Fanduel, where the salary cap isn’t as tight. But even on DraftKings, Jackson is projecting as one of the best QB values despite the steep $8100 tag.

Matt Ryan ($6700 DK, $7800 FD) — We know the Falcons and Dirk Koetter will be one of the league’s most pass-centric offenses. We also know the Seahawks have no pass rush — they are Brandon Thorn’s No. 32 defensive line. Ryan gets 5-of-5 offensive line starters back.

Josh Allen ($6500 DK, $7900 FD) — The Jets defense has been neutered by the loss of ILB CJ Mosley (opt out) and SS Jamal Adams (trade). Also trending well for Allen is the addition of all-world route-runner Stefon Diggs to line up across from John Brown — both of whom have elite WR/CB matchups.

Tyrod Taylor ($5600 DK, $7000 FD) — The artist formerly known as TyGod has averaged .579 rush yards per snap in his career and he’s going to play at least 60 snaps Sunday. He also has a legit set of weapons in Austin Ekeler, Keenan Allen and Hunter Henry. Taylor is our preferred “punt” at QB this week, largely due to the built-in rushing floor.

RUNNING BACK
Christian McCaffrey ($10000 DK, $10000 FD) — CMC is priced near his peaks from last year, so we certainly aren’t getting any discount. Much easier to fit on looser Fanduel. The coaching change in CAR introduces a smidge of risk, but Joe Brady’s scheme is ideal for CMC’s pass-catching skill set. We expect him to handle 90% or more of the RB touches, just like last year.

Alvin Kamara ($7200 DK, $8300 FD) — Better play on DraftKings thanks to relative price and full-PPR format. Caught 16 balls in two games against the Bucs last year as the key cog of the Saints short-area pass game. Back “injury” is not a real concern.

Josh Jacobs ($6800 DK, $8200 FD) — Far cheaper on DraftKings, but certainly in play on both sites thanks to elite matchup. The Panthers were dead last in run defense DVOA last year and then lost Luke Kuechly to retirement and Gerald McCoy to the Cowboys. Jacobs also gets a small target projection boost with Lynn Bowden and Theo Riddick dumped at cut day.

Joe Mixon ($6700 DK, $7300 FD) — Some OL/DL concern here as Brandon Thorn pointed out. But the newly minted Mixon led all RBs in carries over the second half of 2019, Jonah Williams is back and Joe Burrow breathes some spike potential into the offense. Few backs on the slate have as secure touch projections as Mixon — play volume and pace are the concerns.

Boston Scott ($4800 DK, $4700 FD) — Miles Sanders (hamstring) is out, leaving only Scott, Corey Clement and newly signed Jason Huntley as healthy RBs. The Eagles have been extremely high on Scott all offseason after the way he closed impressively last year. Scott is cheap on DraftKings, but essentially free on Fanduel. We only have Scott projected for 13.9 carries and 4.0 targets, but he’s popping into optimals. We have Clement for 9.3 carries and 2.5 targets.

Antonio Gibson ($4000 DK) — We wouldn’t use a RB spot on Gibson on Fanduel, where it’s only half-PPR and we don’t need the savings. But on DraftKings, Gibson’s WR-esque skill set and pricetag opens up plenty of options.

WIDE RECEIVER
Julio Jones ($7700 DK, $8200 FD) — The strength of Seattle’s defense is in the secondary, but that doesn’t matter too much to Julio. See the Matt Ryan notes above for the positives in Atlanta’s pass game this week.

Davante Adams ($7300 DK, $8000 FD) — We have Adams projected for the most targets on the week (11.9), ahead of Michael Thomas (11.7) and Julio Jones (10.0). But he comes in significantly cheaper and faces a Vikings secondary breaking in three new pieces. The Packers’ failure to add any pass-catching help ensures Aaron Rodgers remains locked onto Adams.

Marvin Jones ($5500 DK, $6200 FD) — Removing Kenny Golladay and adding Marvin Hall moves a lot of target opportunity around. And with Adrian Peterson not projecting for a big target share either, a lot goes to Jones. Relatively cheaper on Fanduel.

Marquise Brown ($5100 DK, $5800 FD) — Trending up with the foot injury another year behind him and more bulk on his frame. After playing just 51% of the snaps last season, expect him to push toward 70% this year.

DeSean Jackson ($4900 DK, $5700 FD) —  Alshon Jeffery (foot) is out, Jalen Reagor (shoulder) will likely be limited if he goes and the Eagles are very weak behind them. Jackson, who hasn’t really played since Week 1, should be very fresh for a prime matchup against a funneling Washington defense.

TIGHT END
George Kittle ($7200 DK, $8000 FD) — The NFL’s worst team at defending tight ends from 2019 has to deal with Kittle, who benefits from the injuries to Deebo Samuel (foot) and Brandon Aiyuk (hamstring). Price is better on DraftKings, but cap is softer on Fanduel.

Zach Ertz ($5800 DK, $6700 FD) — The Eagles’ WR injury/depth woes leave Ertz as a primary target once again. We’re projecting him in the 9-target range, a big number for someone at these tags. Safety and coverage linebacker is the area of the defense where Washington struggles.

TJ Hockenson ($4200 DK, $5300 FD) — Without Kenny Golladay, the Lions will have to get Hockenson priority looks in the pass game. They’ll also be looking to get the ball out quickly thanks to a severe OL/DL mismatch against the Bears. Hockenson reportedly tore through camp and is 100% healthy.

Chris Herndon ($3300 DK, $4700 FD) — The Jets’ 3-WR set will feature Breshad Perriman (knee), Chris Hogan and Jamison Crowder. Expect the ultra-talented Herndon to be a key part of the plan. The difficulty here is the matchup as the Bills will likely be amongst the NFL’s best TE defenses once again.

Colts ($3000 DK, $3700 FD) — Expecting a pass-centric gameplan for the Jaguars, but they don’t have enough offensive talent to make it work. Colts are very cheap on Fanduel.