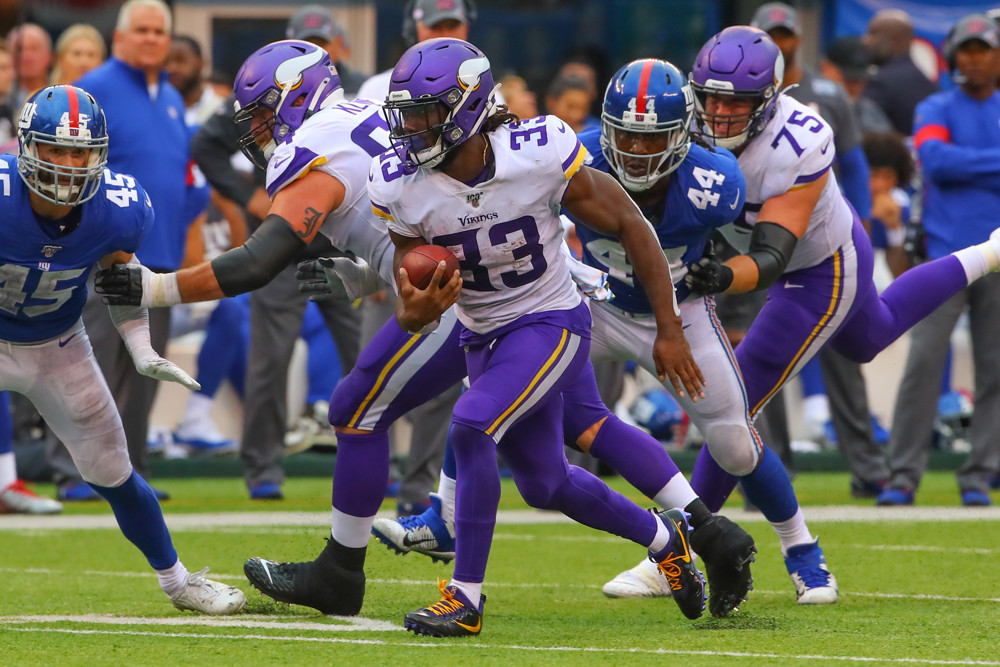 QUARTERBACK
Lamar Jackson ($6800 DK, $8400 FD) — No Marquise Brown (ankle) again, but weekly floor on Lamar is absurd. He has at least 20 DK points in six of his last seven games and hasn’t scored fewer than 14 in a NFL single game he’s started.

Russell Wilson ($6600 DK, $8500 FD) — The absurd efficiency is not an outlier — it’s simply what Russ does. He’s relatively cheaper on DraftKings by a decent amount for this neutral (at worst) home matchup against the Ravens.

Josh Allen ($6500 DK, $7700 FD) — The bargains are over as Allen is now in the top tier of condensed QB pricing. But he the floor/ceiling combo against the Dolphins is elite. They’re dead last in nearly every pass defense category due to an extreme dearth of talent.

Matt Ryan ($6300 DK, $7900 FD) — Six straight 300-yard games to start the season is not a fluke. The Falcons’ run-game woes coupled with an inept pass defense creates massive opportunity for Ryan and his elite weapons.

RUNNING BACK
Saquon Barkley ($8900 DK, $8600 FD) — The ankle is reportedly ready to rock after practicing full all week, and just in time for one of the best possible matchups against the Cardinals. Barkley is far easier to fit on Fanduel, but certainly can get there on DraftKings as well.

Dalvin Cook ($8000 DK, $8300 FD) — Blowouts have capped Dalvin’s snap rate and touches, but Sunday sets up for an extended workload. It’s a division game against an opponent which has been buried by opposing run games, as noted in Silva’s Matchups.

Leonard Fournette ($7000 DK, $7900 FD) — Christian McCaffery-esque usage against the league’s worst run defense. Expect Fournette to be among the most-owned players on both sites on the entire slate.

Chris Carson ($6500 DK, $7600 FD) — The return of Rashaad Penny (hamstring) gives the Seahawks another option, but it’s clear they’re enamored with Carson. He has at least 15 carries in every game this year, has at least 22 in each of the last three games and is on pace for 50-catch season.

Latavius Murray ($5100 DK, $5300 FD) — Latavius is tougher sell on DraftKings where he’s priced the same as Kerryon Johnson, who is also in play. But on Fanduel Murray is just $800 over minimum in a spot he’ll be getting 15-20 touches with one of the league’s best offensive lines.

Cooper Kupp ($7400 DK, $7800 FD) — Last week’s massive dud at 16% ownership will give some folks pause — particularly at lower stakes. As noted in Matchups, Kupp’s spot this week is mouthwatering.

TY Hilton ($5900 DK) — An egregious misprice on DraftKings as a now-healthy Hilton faces a beat-up and leaky Texans secondary. Will likely be the most-owned WR on that site.

John Brown ($5500 DK, $5900 FD) — Brown was limited by a groin injury early in the week, but appears fine. Wildly underpriced on Fanduel, especially as he catches the perfect matchup.

Allen Lazard ($3000 DK, $4500 FD) — Davante Adams is out and Geronimo Allison/MVS are very questionable. The Packers have gotten nothing out of Jake Kumerow, Jimmy Graham or Darrius Shepherd. Enter Lazard, who opens up the salary cap in a massive way on DraftKings. He’s not as needed on Fanduel with Tyler Boyd, Calvin Ridley and John Brown types priced so cheaply.

Austin Hooper ($5300 DK, $6600 FD) — Tons of trust with Matt Ryan, has seen at least six targets in every game and is averaging 8.3 per day. Rams been destroyed by tight ends last few weeks.

Mark Andrews ($4900 DK, $6700 FD) — Finally over his ankle/shoulder/foot woes and off the injury report. Target share gets a bump with Hollywood Brown (ankle) not expected to play.

DEFENSE
Bills ($4300 DK, $5500 FD) — This historically bad Dolphins team has no prayer against an elite Bills unit in the Ralph.

Saints ($2900 DK, $4400 FD) — Brandon Thorn’s No. 3 mismatch of the week is this dominant Saints front against the Bears struggling offensive line.

Colts ($2000 DK, $3600 FD) — Viable punt on both sites. Deshaun Watson took the most sacks in the league last year and has taken the fifth-most this year.