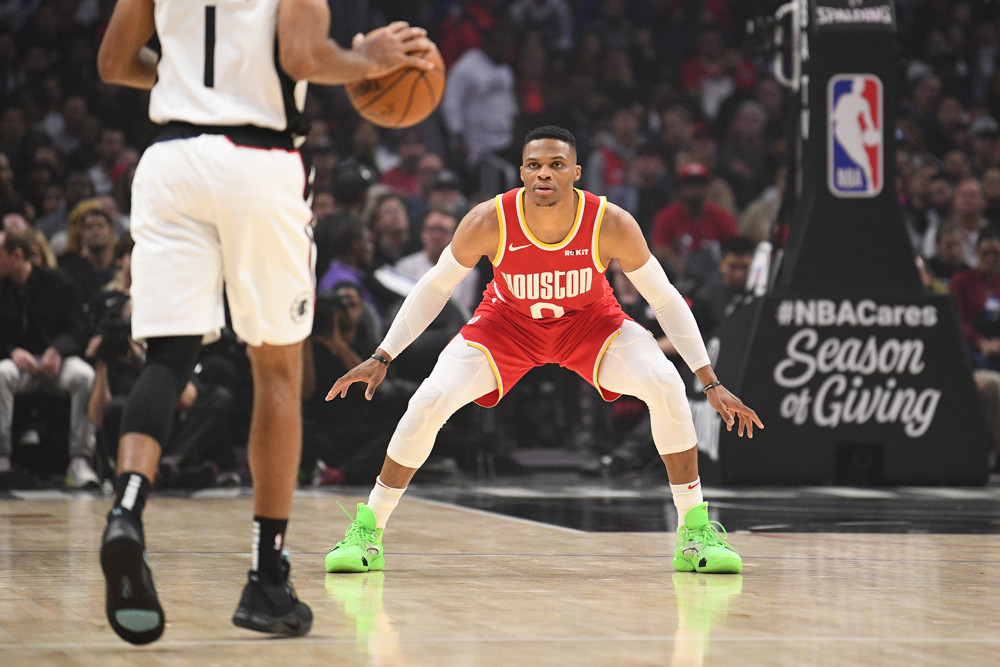 Perhaps no one in the history of NBA DFS has been more impacted by the scorekeeper than our own Andrew Wiggins aka Makisupa. For those unfamiliar, the difference between first and second place in the 2015 DraftKings NBA Live Final was ultimately determined by a triple-double that was originally credited to Russell Westbrook. You can see the triple-double credited below in a screenshot that was tweeted by DraftKings during the final hours of the event. 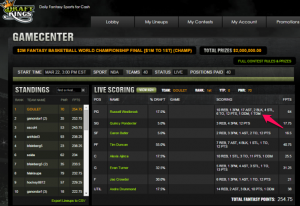 A day later the NBA rescinded a rebound from Russell Westbrook and took away the triple-double. Unfortunately, the stat correction was too late as the contest results were final and paid. The difference in a favorable home score-keeping decision was $750,000.

This particular example is extremely unusual. Typically most score-keeping judgments aren’t overturned, they typically don’t result in $750,000 swings, and generally rebounds aren’t the thing where score-keeping matters most. But I use the example to highlight how subjective decisions can end up impacting the games we play.

In this article, we’ll examine the bias of home score-keeping and talk more generally about how to think about home/road splits in your DFS analysis.

For DFS purposes, home court advantage extends beyond the few points of expectation given to the home team. The home scorekeeper adds a bit of additional value. Over the last three years, we’ve seen home teams demonstrate an advantage in most statistical categories.

You can see advantages shake out across a number of categories, but for the purpose of this article let’s focus on the statistics that have some level of subjectivity to them: Assists and blocks. In basketball, an assist is entirely at the scorekeeper’s discretion. In some instances you’ll see a pass to a standing perimeter player who catches, pauses, and then blows by a defender for a layup graded as an assist. In other instances, the exact same action will go without an assist.

Blocks are another statistic that can be more subjective than you might think. There are a number of plays during a game where possession is lost out of bounds and stays with the team who had possession. When the ball is knocked out of bounds by the defender, the scorekeeper has a judgment to make on whether the offensive player was shooting or not. Since this is an opportunity for “no statistic” or “statistic that favors the home team” you often see large discrepancies in blocks per game in favor of home teams.

(As an aside. This discrepancy plays a small impact in the field goal percentages and I believe may be at the root of some of the steal advantages for the road team as well. When that sideline strip occurs in bounds it needs to be recorded as a steal or a block and since the block comes with a missed field goal and a chance for a rebound, it’s more beneficial to the home team statistics to treat those as missed field goals than turnovers since there are two statistics up for grabs instead of one.)

Our fantasy points are in the hands of someone else and we need to use what we know to our advantage to take some of them back!

Under normal circumstances, the first step would be to use players from the home team as a tiebreaker on similarly strong plays in hopes of catching some of the score-keeping boost, but we can go further. We can dissect which teams have the friendliest scorekeepers and expect wider home/road splits from players who get most of their production from those categories.

In this instance, with the NBA restart eliminating scorekeeper bias we’re going to go in the opposite direction. If you were on a team that benefited from friendly score-keeping, you’re likely a touch overpriced at the start of this experiment as you won’t have the friendly scoring to boost your overall statistics as the home team. So, we’re actually looking for the least friendly home scorekeepers in order to target players that might be a touch under-priced compared to their peers.

Let’s start with assists per field goal made differential:

This is the percentage difference in the percentage of field goals that are graded as assists when a team is at home and on the road. This is a list of the bigger outlier teams in the league and it’s trimmed down to only include teams competing in the bubble. Teams with the higher percentage (in green) have experienced the most favorable scorekeepers over the last three years when it comes to assists. The teams in red have had some of the least friendly scorekeepers in the league and have actually seen a higher percentage of their field goals assisted when on the road. Since we’re expecting no scorekeeper bias in the bubble, players from the teams in red are more likely to be under-priced on the restart.

When we investigate these teams we’d expect to see discrepancies by season in individual player assist rates and we would likely see the biggest discrepancies on the players who assist most frequently. An example is Nikola Jokic of the Denver Nuggets. Below are Jokic’s splits courtesy of StatMuse 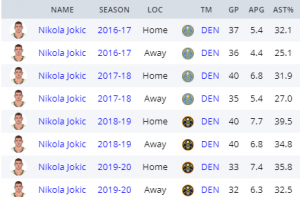 Each of the last four seasons, Jokic’s assist percentage has been 3-7 percentage points lower on the road than at home. Without that bump from the home scorekeeper, Jokic’s price tag is likely a little elevated at the beginning of the restart. This does not mean he’ll under-perform his tag, but it is a bigger hill to climb when all assists are treated equally.

The same type of analysis can be applied to blocks, another statistic with some level of subjectivity. Since blocks are a lower frequency event than assists and there are fewer opportunities for subjectivity to swing decisions, we should not value the statistical changes as strongly as we do assist expectation changes.

Once again we should double check with an individual who would be representative of the friendlier homer scorekeeper, so this time we’ll look at Joel Embiid thanks to our friends at StatMuse. 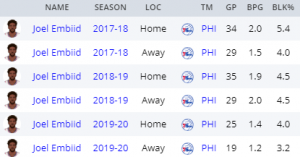 Like Jokic and the assist rate, we see a similar pattern with Embiid and his block rate. This is another example of a player that is more vulnerable to being overpriced early on without the benefit of a home scorekeeper.

On the other hand, Rudy Gobert probably won’t be impacted by a neutral scorekeeper. 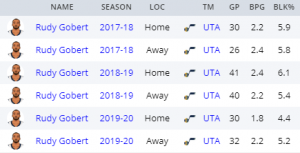 How to use Splits in DFS?

We will do all the heavy lifting for you on understanding player valuations relative to expectation and communicating them to you each and every day of the NBA season. The purpose of this article is to demonstrate some of the things we’re taking into account that the average DFS player may not even be thinking about. If you want to find edge in DFS, look for change. Interpreting and understanding how the change in context impacts player valuations is our specialty. With the restart in the NBA, the lack of home court advantage and specifically score-keeping, there is an opportunity for those who understand it to add incremental edge.

But there is also a broader lesson here regarding splits analysis.

Generally, I believe DFS players use home/road splits poorly. Splits naturally shorten the sample size you’re working with and thus lower predictive power and increase variance. DFS players typically like to use in-season splits to evaluate home/road discrepancies in performance. The in-season samples end up being quite small and DFSers draw misleading conclusions from small samples without understanding context. Context is key here. Instead of taking a very small sample (an individuals’ home/road splits from one season) and drawing a conclusion, we’re aggregating league wide data and using multiple years to broaden the sample. From there, we’re digging in on individual team discrepancies and checking if they apply to individual players who rely on those statistics. This is a more holistic approach to thinking about splits and it helps eliminate some of the “false positives” you’d get from drawing conclusions on the small samples without thinking of the bigger context. Always remember, context is king.