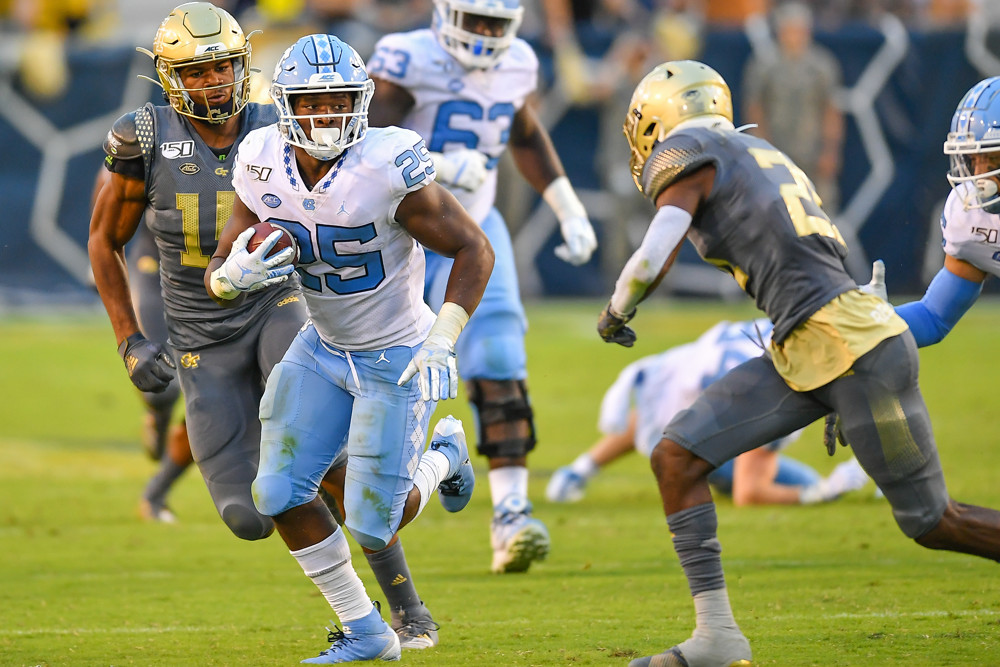 This draft class has four RBs that appear to be very strong bets to be selected in the top three rounds. Below I detail their statistical profiles and provide a list of recent data-driven comps.

Harris is 6’2″, 232 lbs. He’s built to handle a full NFL workload. We don’t have any athletic measurables for him, but it’s safe to say he would have jumped well.

It’s also safe to say that Harris would not have had a good 40 time. Mike Renner recently pointed out that Harris didn’t have a run longer than 35 yards before his final college season. And per PFF, over his entire career, Harris only had 25 rushes of 20+ yards. With this lack of demonstrated breakaway ability, Harris seems unlikely to be a big-play threat in the NFL.

Luckily, Harris has the tackle-breaking ability to succeed anyway. His career elusive rating of 112 bests smaller shifty RBs like Kareem Hunt and Cam Akers. Given Harris’ size, it seems likely that his tackle shedding will easily translate. If a team gives him a full rushing workload, he should be able to deliver chunk gains fairly regularly.

Harris draws rave reviews as a receiver from film evaluators, and he was quite productive as well, averaging 15 receiving yards per game over his career.

But Harris wasn’t actually that efficient as a receiver, averaging a yards per route run (YPRR) of 1.13 over his career. To be clear, that’s not a bad mark. It’s only slightly worse than what we saw from Clyde Edwards-Helaire at LSU, and better than J.K. Dobbins and Cam Akers. But it’s also below the more promising levels of Jonathan Taylor and D’Andre Swift, and well below pass-catching greats like Christian McCaffrey and Alvin Kamara. It’s also well below Joe Mixon and Josh Jacobs, prospects who seemed like very strong bets to be used heavily in the passing game, yet who have so far fallen short of true bell cow workloads.

Overall, it’s clear that Harris can operate as a receiver if tasked with those duties. But I don’t view him as a lock to become an every-down RB.

Najee Harris has serious upside in the right situation. He could end up being a bigger version of Cam Akers, or a James Conner who doesn’t have to sit on the bench to begin his career. Unfortunately, the scenarios where Harris becomes a fantasy star overlap heavily with the scenarios where he is very expensive to acquire.

I believe that Harris would benefit greatly from landing with a franchise philosophically committed to utilizing a workhorse RB and that prioritizes consistent chunk gains over explosive plays. If it sounds like I’m talking about Pittsburgh, that’s because I am. It will be very hard not to be excited about Harris if the Steelers actually pull the trigger on him at 24th overall. But it will also be very hard to acquire Harris if and when this happens.

On the other hand, if Harris lands in a more muddled backfield, I won’t be that excited to acquire him at reduced cost. Given that he’s unlikely to be highly efficient as a rusher or receiver, he may find himself stuck in a committee if sharing a backfield with a high-end pass catcher or big-play threat.

Harris’ ceiling is mouth watering. He could be a first-round dynasty startup selection in 2022. But he also has a lower floor than the consensus view would lead you to believe.

Travis Etienne isn’t as big as Harris, but his size is actually a better fit for the modern NFL game. In our Best Ball rankings, three of our top five ranked RBs entered the NFL below 220 lbs, as did six of our top 10 RBs.

Etienne’s calling card is his speed, so it’s no surprise that he posted a very strong score in PFF’s breakaway percentage metric over his career. His 52% bests Jonathan Taylor and Nick Chubb‘s college scores, and is only slightly behind Dalvin Cook and Joe Mixon.

Etienne also did a great job of creating for himself. His career elusive rating of 141 is off the charts good — the second-highest mark in the PFF database (among RBs with 200+ career rushes).

However, Etienne had the advantage of lighter workloads throughout his Clemson career, averaging just 12.4 carries per game. Other elusive RBs like Taylor, Cook, Todd Gurley, Kareem Hunt, Devin Singletary, David Montgomery and Zack Moss all handled over 15 career carries per game.

Etienne’s YPRR of 1.66 is a very strong mark for a RB prospect and ties Jonathan Taylor and Saquon Barkley for the fourth-best mark since 2018, behind only Rashaad Penny, Josh Jacobs, Antonio Gibson, and a RB I’ll be covering shortly.

And Etienne delivered efficiently while handling a big receiving workload. His 21 receiving yards per game trail only Barkley, Gibson and the 2021 RB below.

Etienne has the elusiveness, breakaway speed and dynamic receiving ability of a modern superstar RB. His profile isn’t perfect though. He had a lighter than ideal rushing workload, which could foreshadow a part-time NFL role. And while he’s a very good receiver, he’s not a world-class receiving prospect like Christian McCaffrey or Alvin Kamara. He would do well to land with a team committed to getting him in space and utilizing him in the receiving game.

Javonte Williams weighed in three pounds less than Etienne at his pro day, but anyone who’s watched them knows that Williams plays like the bigger back. And given that Williams only turned 21 earlier this week, it’s possible he adds weight as a pro. While not strictly necessary, added weight may help Williams’ physical running style translate to the NFL.

I wish he was a bit faster, but otherwise he looks like a strong athlete.

Williams set the PFF records in 2020 for broken tackles per attempt and rushing grade. He also set the record for career elusive rating (min. 200 rush attempts). Suffice it to say, he’s hard to bring down.

Williams wasn’t just a tackle breaker either; he followed up on making people miss with explosive breakaway ability. Over his three-year career he had a breakaway percentage of 44%. That’s not an incredible mark, but it’s well above break-tackle-get-tackled specialists David Montgomery (31%), Josh Jacobs (31%) and Zack Moss (39%).

The red flag in Williams’ rushing profile is that he was a committee RB at UNC. He handled only 11.8 rushing attempts per game. Like Etienne, this makes his rushing profile a little less bulletproof.

Michael Carter was considered the receiving specialist in UNC’s backfield. But Williams actually delivered more receiving value, averaging 16.5 receiving yards per game to Carter’s 14.6. Williams was also more efficient than Carter, with a career YPRR of 1.54 to Carter’s 1.24.

Sharing a backfield with Carter seems to have suppressed some excitement around Williams’ receiving ability. But his receiving profile is impressive, and he has a strong chance to become a three-down NFL RB.

If given similar situations, I’d rather bet on Williams than Najee Harris. Williams is a full two years younger, likely more athletic, likely to add more explosive plays, and can likely keep his offense on track just as well with a strong chunk-gain skill set as a rusher and receiver.

But while Harris has dream landing spots with first-round draft capital in his range of outcomes, Williams has muddled third-round landing spots in his. Even still… I’ll be excited to draft Williams at reduced cost if given the opportunity. And things could get frothy if he finds a good situation in Round 2.

At 201 pounds, Gainwell is shaping up to be the lightest Day 2 RB selected since LaMichael James and Ronnie Hillman in 2012. However, we have seen elite ceilings from RBs entering the league between 195-205 lbs. For example, Christian McCaffrey entered the NFL at 202, Ray Rice at 199, and LeSean McCoy at 198.

But Gainwell’s size is definitely cause for some concern. Highly elusive but small college RBs like Ameer Abdullah and Darwin Thompson failed to translate to the NFL. And while the jury is still out on Devin Singletary and Darrynton Evans, the early results aren’t that promising.

The good news is that Gainwell recorded a 4.47 40 at his pro day. Since 2015, among RBs weighing 205 lbs or less and drafted in the top three rounds, only Gainwell, McCaffrey and Evans broke 4.5 in the 40. Although small, Gainwell does at least have high-end speed.

Of the recent small RBs, Gainwell is tied for the lead in breakaway percentage with Evans and only Singletary was better in career elusive rating.

The odds are stacked against Gainwell becoming an NFL workhorse, but he appears to be a capable enough rusher to add value in a rotational role.

This is where Gainwell shines.

Since 2015, only six RBs have a career YPRR of 2.0 or better on 200+ routes: Christian McCaffrey, Joe Mixon, Alvin Kamara, Josh Jacobs, Antonio Gibson and Kenneth Gainwell. Gainwell’s level of receiving ability is truly rare for a RB.

Gainwell was delivering this efficiency on a sizable workload as well. He averaged 16 routes and 39 receiving yards per game, both of which were better than every member of this exclusive cohort, other than converted WR, Antonio Gibson.

Gainwell is such an electric receiver that he can likely deliver fantasy value on that skill set alone. This makes him an ideal player to bet on in a muddled situation. He’s likely to emerge quickly as a receiver, and may not stop there — with just enough rushing promise to allow you to dream about an Aaron Jones career arc.

However, if Gainwell gets a good landing spot, he won’t be cheap. Given Antonio Gibson‘s success coming out of the same system, Gainwell is fully on the fantasy community’s radar. But with good draft capital and immediate opportunity, Gainwell’s ADP would have to skyrocket to fully price in his ceiling.