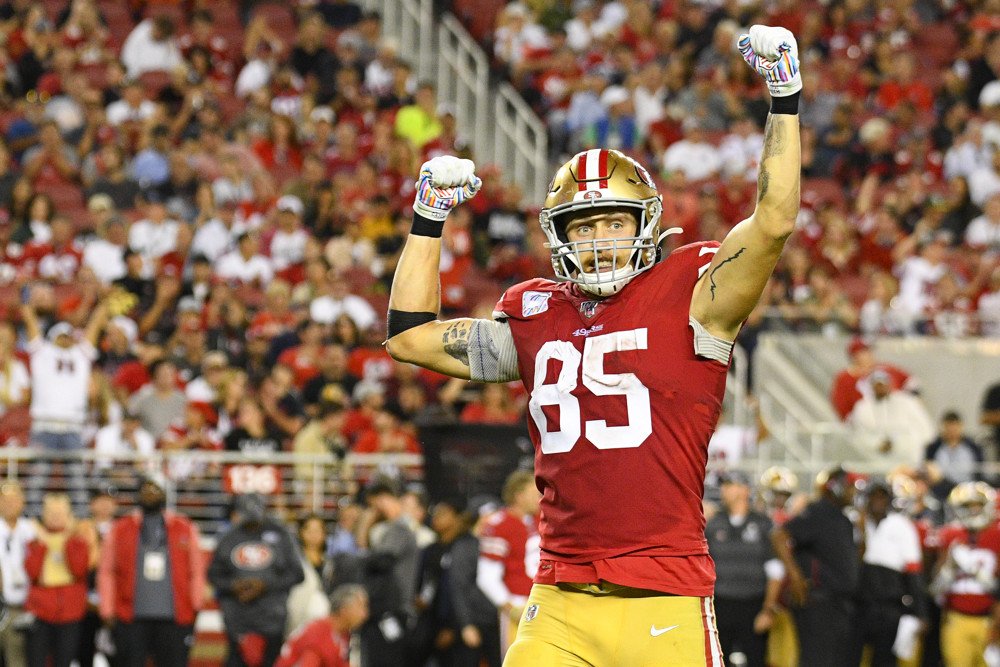 While undefeated San Francisco’s defense has understandably earned most to-date plaudits, this is a potential blowup spot for Kyle Shanahan’s offense in an epic Week 7 revenge game against a Redskins franchise that fired him and his father in December of 2013. Kyle can best set this into motion by imposing his will via San Francisco’s dominant rushing attack paced by Tevin Coleman, whose touch counts are 16 and 20 since the 49ers’ Week 5 bye. Pinpointed as Shanahan’s preferred goal-line back, Coleman has hit pay dirt in consecutive games and out-snapped Matt Breida 56% to 35% in last week’s rout of the Rams. Even after missing time with a high ankle sprain, Coleman has ten red-zone touches to Breida’s two. Coleman is an upside RB2 in this plum draw; Washington has been touched up for an unimposing 148/633/4 (4.28 YPC) rushing line and the NFL’s second-most receptions per game (7.0) by enemy backs. … Despite Breida’s superior per-touch efficiency, Shanahan appears to fancy Coleman as a true lead back and Breida as an explosive change of pace who operates best on limited usage. Breida still handled 17 touches and a season-high four targets in last week’s win over the Rams and remains RB2/flex playable, even if Coleman is a better one-for-one option. It very much helps that this backfield has been reduced from a three- to two-man ordeal; Raheem Mostert played just seven snaps in L.A. and will likely resume focusing on special teams. … Jimmy Garoppolo warrants Shanahan-narrative-based Week 7 streamer consideration but has finished above QB16 just once in five 2019 starts, operating as a game manager on a defense- and running game-based 49ers team. It does help that Washington’s sieve-like pass defense has coughed up top-13 fantasy quarterback scores in 4-of-6 games while ranking a sub-par 18th in sack rate (6.1%) and 23rd in QB Hit Rate (13.4%), suggesting Jimmy G’s pocket should be clean.

Jimmy G’s 2019 target distribution: George Kittle 37; Deebo Samuel 22; Dante Pettis and Marquise Goodwin 15; Breida 12; Kendrick Bourne 10; Richie James 8; Coleman and Mostert 6. … Kittle shook off last week’s groin scare to play 83% of San Francisco’s snaps and turn in his season-best game (8/103/0). Washington has allowed the NFL’s ninth-most catches (31) and tenth-most yards to tight ends (337). … Even with James weeded out, the 49ers maintained a four-man WRBC against the Rams; Samuel led the unit in routes run (28) but Pettis drew the most targets (6) and gained the most yards (45). In a low-volume passing attack, this is a situation to continue to avoid in season-long leagues. Pettis would still be my pick if forced to choose between him, Samuel, Goodwin, and Bourne. Pettis’ snaps have increased in three straight weeks (42% > 63% > 71%), and he was unluckily tackled twice inside the five-yard line in last Sunday’s victory. Pettis also ran a team-high 55% of his routes inside, where Washington has been torched for 44 completions on 52 slot targets (85%) for 451 yards (8.7 YPA) and four touchdowns.

The Redskins will stick with Case Keenum after his two Week 6 touchdown passes versus Miami keyed Washington’s first 2019 win, albeit now to face a far-tougher foe. Fired-up 49ers DC Robert Saleh’s defense has permitted lowly fantasy scores of QB30 (Jameis Winston), QB10 (Andy Dalton), QB24 (Mason Rudolph), QB32 (Baker Mayfield), and QB28 (Jared Goff) while ranking No. 3 in sack rate (10%) and No. 2 in QB Hit Rate (18.8%). Keenum is a weak two-quarterback-league play. San Francisco is on pace to allow the NFL’s fewest passing yards since 1982. … Adrian Peterson showed he remains capable of beating up on cupcakes by parlaying season highs in snaps (63%) and touches (25) into 136 yards versus the Fins. But the 49ers are the opposite – enemy backs have just 87/346/0 (3.98 YPC) rushing against them – and A.P. still ran only seven routes and drew two targets. Peterson goes from rock-solid RB2 play to low-floor flex option downgrading matchups from Miami to San Francisco. Living in backfields, the 49ers have tackles for loss on 30.8% of enemy run plays, third most in the league. … This should theoretically set up as a Chris Thompson game, yet San Francisco has yielded a league-low 24.2 receiving yards per game to running backs, and interim coach Bill Callahan’s run-game devotion suggests he’ll keep smashing Peterson into brick walls even if the Skins fall behind. On Tuesday, Callahan revealed Thompson is dealing with turf toe, putting his Week 7 availability in doubt. Wendell Smallwood is next in line for passing-down/change-up work behind Peterson.

Keenum’s 2019 target distribution: Terry McLaurin 31; Thompson 28; Trey Quinn 27; Paul Richardson 24; Vernon Davis 17; Jeremy Sprinkle 9; Peterson 7; Wendell Smallwood, Kelvin Harmon, and Steven Sims 3. … Although San Francisco has allowed the NFL’s ninth-fewest fantasy points per game to wide receivers, McLaurin’s usage and obvious rapport with Keenum give him a shot at true matchup-proof scoring ability. 49ers RCB Ahkello Withersoon (ankle) is out for one more week, while McLaurin’s stat lines in Keenum’s four full games are 5/125/1 > 5/62/1 > 6/70/1 > 4/100/2. Isolating just those weeks, McLaurin ranks second in the NFL in Air Yards market share (49%). Per Sports Info Solutions, McLaurin is tied for the league lead with four touchdown catches versus zone coverage and ranks top five in the league in yards per target against zone (12.7). The 49ers play zone coverage at a 79.5% rate. … Quinn hasn’t reached 40 yards in a single 2019 game and has drawn exactly four targets in three straight weeks. … After goose egging on four targets in a beautiful Week 6 matchup with Miami, Richardson now has 50 yards or fewer in 11-of-13 games as a Redskin. … Teams targeting tight ends against San Francisco are 19-of-29 passing for an anemic 121 yards (4.2 YPA) and one touchdown. They held white-hot Gerald Everett to nine scoreless yards on five targets last week. Even in a revenge game, Davis is little more than a desperate streamer.