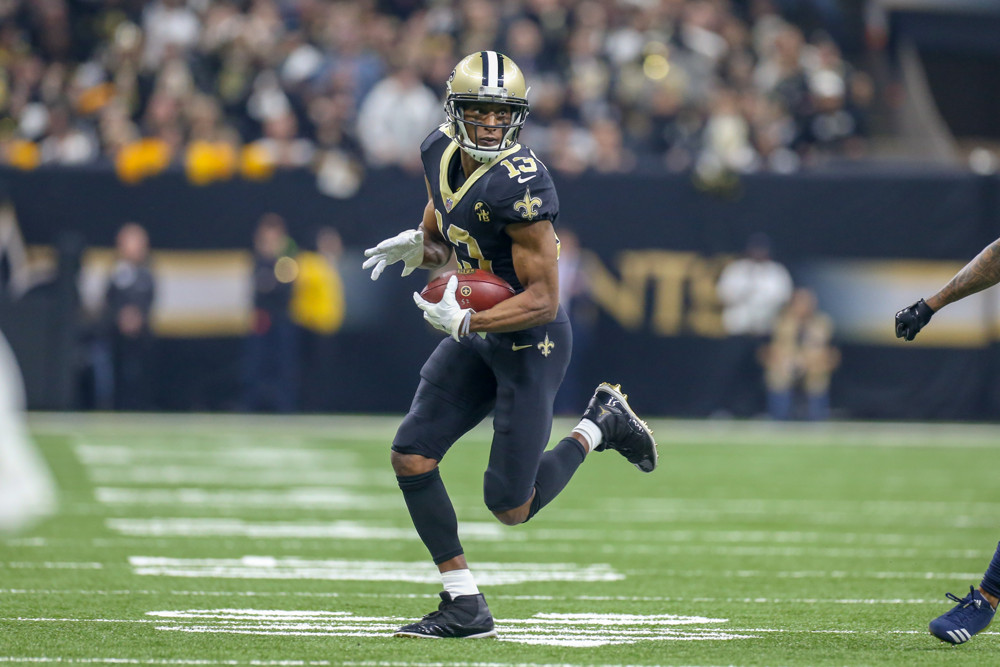 Jimmy Garoppolo visits the Superdome with just four top-12 fantasy scores in 12 starts to face a vicious Saints defensive front rested following its post-Thanksgiving mini-bye. Up to No. 4 in the NFL in both sacks (40) and QB hits (85), New Orleans has permitted just one top-ten QB1 finish since Week 3. This is a fade spot for most of San Francisco’s passing game. … Even as Raheem Mostert dominated last week’s backfield for an explosive-if-unanticipated 152 yards and a touchdown on 21 touches, the 49ers’ running back corps lacks usage definition heading to New Orleans with ousted lead back Tevin Coleman, goal-line vulture Jeffrey Wilson, and oft-injured Matt Breida all posing ongoing threats in a daunting draw. The Saints have stymied enemy backs for a combined 213/749/4 (3.52 YPC) rushing line and allowed the NFL’s seventh-fewest receiving yards per game (34.3) to the position. One thing we can say with some certainty is Coleman no longer warrants fantasy consideration with fewer than 75 total yards in seven of his last eight games, especially after Kyle Shanahan dropped Coleman’s playing time to a season-low 18% in last Sunday’s loss to the Ravens. Coleman has averaged 2.48 yards per carry over the past five weeks. Mostert handled a season-high 73% of last week’s snaps and is the 49ers’ lone usable RB2/flex option against the Saints, albeit an unsafe one based on workload, matchup, and game-script concerns.

Jimmy G’s Week 13 target distribution: Emmanuel Sanders 6; George Kittle and Deebo Samuel 4; Kendrick Bourne 3; Mostert 2; Coleman and Wilson 1. … Sanders finally appeared over his debilitating rib injury in last Sunday’s loss to Baltimore, playing all but one snap and leading San Francisco in targets and catches (4). Unfortunately, Sanders is the 49ers’ likeliest candidate for Marshon Lattimore’s shadow coverage and has topped 60 yards once since Week 4. He’s a dicey WR3 play. … After flopping along with the rest of San Francisco’s Week 13 passing game at Baltimore, Kittle remains a bet-on-talent TE1 in another difficult draw. Athletic at linebacker and safety, New Orleans has permitted the NFL’s ninth-fewest fantasy points to tight ends. Kittle still has 85-plus yards and/or a touchdown in five of his last seven games and is always worth teeing up confidently regardless of matchups. … Samuel’s passing-game involvement has taken a big hit with Sanders and Kittle healthy, drawing consecutive target counts of 2 and 4. He’s a low-floor, big-play-dependent WR3/flex option who will also encounter his fair share of Lattimore when Sanders kicks into the slot. … Bourne is a touchdown-or-bust deep-league WR4 with one game above 42 yards all year. Bourne has played 55% of the snaps or fewer in three straight weeks.

The Saints host the 49ers coming off a mini-bye after Sean Payton’s team took care of Thanksgiving business at Atlanta. Drew Brees’ matchup is daunting against the Niners, who’ve struggled with dual-threat passers Kyler Murray and Lamar Jackson but otherwise held 8-of-9 quarterbacks faced to fantasy results of QB14 or worse. Injuries to LT Terron Armstead (high ankle) and LG Andrus Peat (broken arm) are likelier to be felt versus a 49ers defense that ranks No. 2 in sacks (45), while Brees hasn’t exactly lit it up since returning from his Week 2 hand injury as fantasy’s QB14 in points per game in Weeks 8-13. … San Francisco hasn’t posed a fearsome run-defense matchup in quite some time, surrendering a 184/829/3 (4.51 YPC) rushing line to enemy backs over its last nine games while losing MLB Kwon Alexander (torn pec) and DE Dee Ford (hamstring) along the way. It sounds old by now, but Alvin Kamara remains a screaming positive-TD-regression candidate with zero end-zone trips since Week 3 and performs best on the ground as an outside rusher, where San Francisco is especially vulnerable. With Latavius Murray being squeezed out of the offense again, Kamara’s 82% Thanksgiving snap rate was his highest since Week 3. I’m standing by Kamara as an RB1 play with DFS-tournament appeal.

Brees’ 2019 target distribution: Michael Thomas 68; Kamara 45; Jared Cook 30; Ted Ginn 23; Murray 20; Tre’Quan Smith and Josh Hill 11; Taysom Hill 10. … Thomas busted on Thanksgiving in large part due to Brees’ season-low 184 yards in a game controlled by New Orleans’ defense, special teams, and fantasy football’s version of Satan, Taysom Hill. Thomas’ Week 14 on-paper matchup is the stiffest he’s faced all season – San Francisco has yielded the NFL’s second-fewest fantasy points to wide receivers – rendering Thomas a bet-on-talent and bet-on-volume WR1. To break Marvin Harrison’s single-season record of 143 catches, Thomas must average 8.5 receptions over New Orleans’ final four games. … Even as Cook has left a discouraging amount of production on the field with repeated big-play drops lately, he enters Week 14 with 70-plus yards and/or a touchdown in six straight games and leads all NFL tight ends in Air Yards (274) and actual yards (291) over the last month. Like Thomas, Cook is a fade-matchup play against the Niners, who’ve allowed the NFL’s second-fewest fantasy points to tight ends this year. … Ginn and Smith are both low-percentage, big-play-dependent dart throws in a poor Week 14 spot. San Francisco has permitted a league-low 19 completions of 20-plus yards.