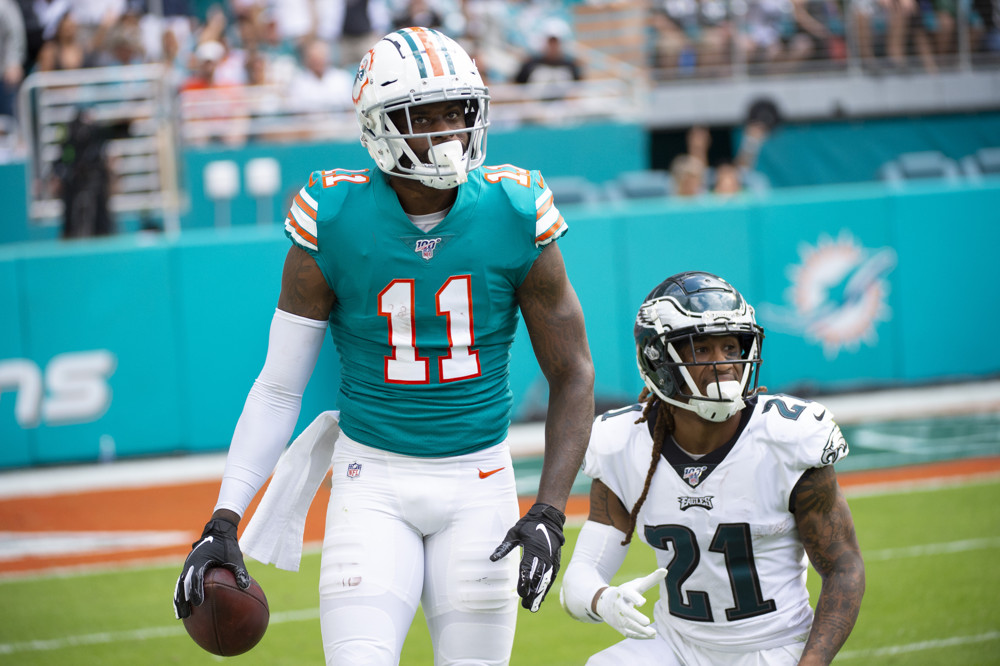 Despite early-week rumors otherwise, the Bengals will play their 15th straight game sans A.J. Green (ankle) in a meaningful contest only for 2020 draft position. Averaging nearly five fewer fantasy points per game when Green sits over the past two years, Andy Dalton has mustered next to no box-score intrigue without a finish above QB15 since Week 7 and a 7:11 TD-to-INT ratio over his last eight starts. Not even Sunday’s plum draw at Miami is enough to vault Dalton above two-quarterback-league range. … Since 9 of the last 11 defenses to face Cincinnati tallied top-ten fantasy weeks – including seven top-six scores – the Fins’ D/ST checks in as a legit Week 16 sleeper. … On stretch-run fire for a Zac Taylor-coached team that’s shown consistent willingness to keep running the ball down multiple scores, Joe Mixon regained every-week RB1 valuation weeks ago with 100-plus total yards and/or a touchdown in seven of Cincy’s last eight games and a 23.8-touch, 124.2-yard average since the Bengals’ Week 9 bye. Drilled by backfields all year, the Dolphins got 2019 fantasy dud Saquon Barkley off the schneid last week for season highs in total yards (143) and touchdowns (2). Mixon also stands to benefit from Miami’s loss of MLB Raekwon McMillan (hamstring, I.R.), PFF’s No. 8-graded run-defending inside linebacker among 60 qualifiers this year.

Dalton’s Week 15 target distribution: Tyler Boyd 7; Alex Erickson and Tyler Eifert 5; Mixon and John Ross 3; Giovani Bernard, C.J. Uzomah, and Cethan Carter 2. … Chased by Stephon Gilmore on most of last week’s targets, slot man Boyd is an excellent PPR bounce-back bet with averages of 9.9 targets and 6.1 catches over Dalton’s previous ten starts. PFF has charged Dolphins UDFA rookie slot CB Jomal Wiltz with the 13th-highest passer rating allowed (121.4) among 124 qualified corners. … Still scoreless since November 2017, Erickson continues to run lots and lots of routes and do little on them. He hasn’t hit 50 yards since Week 8. … Eifert’s playing time has upticked slightly over the past two weeks – he played over half of the Bengals’ offensive snaps (55%) for just the second time all year in Week 15 – but Eifert ranks just 19th among NFL tight ends in routes run during that stretch with consecutive receiving lines of 4/49/0 and 3/44/0 to show for it. He’s just not getting enough usage to stream. … Frustratingly, the Bengals did not commit full-time Week 15 snaps to Ross despite Auden Tate’s (MCL, I.R.) loss, instead opting for multi-tight end sets involving Eifert, Carter, and Uzomah. Thus, Ross drew just three targets on 38% of the snaps and is a leap-of-faith WR4/DFS-tournament consideration against the Dolphins.

As crazy as it may sound, the Bengals’ D/ST is fantasy-punt playable here; 12-of-14 defenses (86%) to face Miami have banked top-12 weekly scores. … At the same time, Ryan Fitzpatrick has reentered DFS-tournament discussion in a revenge game against one of his (many) former teams coming off FitzMagic’s fifth top-eight QB1 score in ten starts. While Cincy’s defensive improvement is notable – four straight quarterbacks to face the Bengals have fantasy scores of QB17 or worse – the Dolphins’ self-induced pass funnel combined with Miami’s defensive leakiness and Fitzpatrick’s YOLO-ball aggressiveness keep his ceiling high in DeVante Parker stacks. … A Week 15 trainwreck against the Giants, Patrick Laird blew two blitz pickups, committed a pair of costly drops, and was all but benched for Myles Gaskin, who held up well with 72 yards on 11 touches and could easily usurp lead duties this week. Since Laird remains a superior receiving back and Gaskin is probably the better runner, I’m projecting a near-even split versus Cincy and considering both Laird and Gaskin low-floor, low-ceiling flex options in a broken run game.

Parker returned from his concussion-ruined Week 14 game to score twice in last Sunday’s loss to the Giants, pace the Dolphins in Air Yards (101), and play all but four of the team’s offensive snaps. With 90-plus yards and/or a touchdown in eight of his last ten non-concussion-shortened games, Parker is a WR2 play with WR1 upside regardless of matchups. … Albert Wilson ran as Miami’s No. 2 wideout behind Parker in Week 15’s loss to the Giants, while Allen Hurns and Isaiah Ford shared third receiver playing time almost evenly. Wilson has gone 12 straight games without clearing 60 yards and reached pay dirt once during that span. … Any tight end averaging nearly 6.5 targets per game for an extended stretch warrants fantasy conversation, and that’s what Mike Gesicki has done since Week 8. Gesicki’s results have been up and down – four games below 30 yards and three above 45 – but the opportunity isn’t going away on a pass-first Dolphins team. He’s a volume-based, boom-bust streamer versus Cincy.