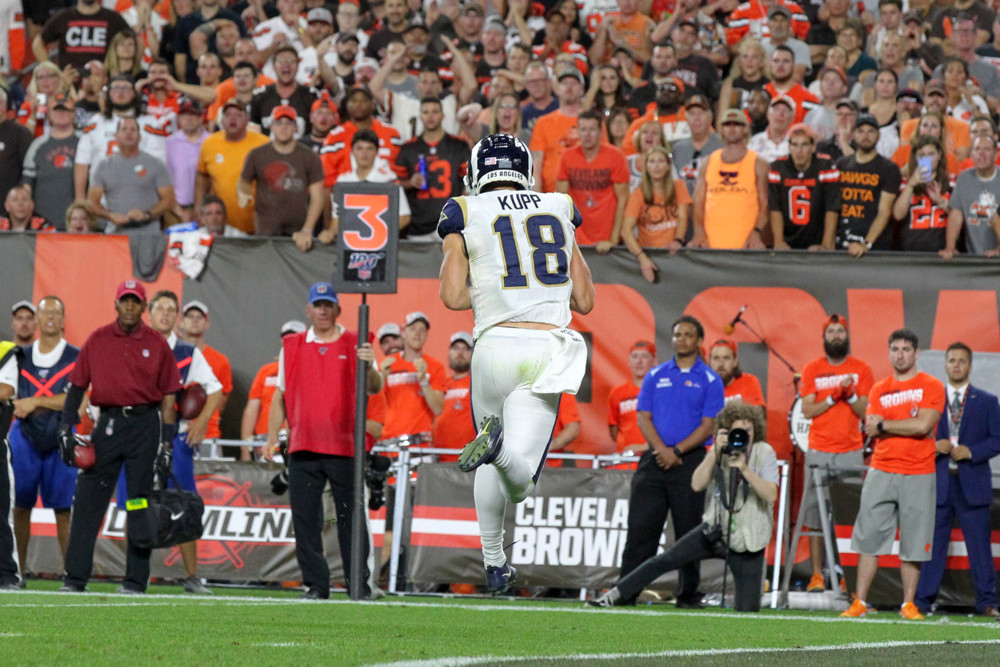 The Bengals’ season down the tubes at 0-7, Andy Dalton should be at increasing risk of an in-game benching in favor of rookie Ryan Finley, who starred this preseason and was handpicked by first-year coach Zac Taylor. Dalton does deserve credit for severely outscoring environment-adjusted fantasy expectations with top-18 results in 6-of-7 starts and four top-12 finishes, and he remains playable in two-quarterback-leagues. The Rams’ D/ST remains a superior Week 8 play; Aaron Donald is a lead-pipe lock to wreck Cincinnati’s helpless interior offensive line, while 5-of-7 defenses to face the Bengals have logged top-ten weekly results. … Joe Mixon’s Week 7 reinforced just how lost a cause his fantasy season is with four yards on 11 touches, Mixon’s fifth game below 70 yards from scrimmage in seven tries. Still sharing snaps nearly evenly with Giovani Bernard, Mixon has devolved into little more than a Hail Mary flex dart. The Rams have held enemy backs to 3.70 yards per carry and just 39.1 receiving yards per game.

Dalton’s 2019 target distribution: Tyler Boyd 73; Auden Tate 41; Alex Erickson 29; Tyler Eifert 25; Gio 23; Mixon 21; C.J. Uzomah 12; Drew Sample 5. … Even as Boyd’s production has been frustratingly uneven, he ranks third in the NFL in targets (74) and should soon experience positive-TD regression with just one score on the year. Boyd uncharacteristically dropped four passes over the past two weeks; he previously went seven straight games without a drop. Sunday’s matchup is imposing, though – the Rams have surrendered just 326 yards and one TD on 61 slot targets (5.34 YPA) – rendering Boyd a volume-driven WR2 play in PPR leagues. … Likely to draw Jalen Ramsey treatment as Cincinnati’s top perimeter threat, Tate is a tough Week 8 sell as more than a touchdown-or-bust WR4 in a game where the Bengals probably won’t score much. … Erickson has emerged as a WR3/flex option in PPR leagues after playing 94% of Cincinnati’s Week 7 offensive snaps, tying Boyd for the team lead in targets (14), and leading the Bengals in receiving (8/137/0) against Jacksonville. Erickson runs short-depth underneath routes that will be critical for Cincinnati’s chances of moving the chains with Dalton likely to be under heavy duress. … Eifert has not topped 27 yards in a single 2019 game and belongs on season-long waiver wires.

Back to 4-3 following last week’s critical victory in Atlanta, the Rams head to London for a true smash spot versus the Bengals, who’ve surrendered top-13 fantasy results to five of their last six quarterbacks faced including top-six results to Kyler Murray, Jimmy Garoppolo, and Lamar Jackson. As Jared Goff’s passer rating spikes from a miserable 62.9 under pressure to 95.5 when clean, Cincinnati’s lack of pass rush is key here; the Bengals rank bottom five in sack rate (4.1%), bottom three in QB Hit Rate (10.5%), and are still missing LCB Dre Kirkpatrick (knee). As Zac Taylor’s head-coaching debut has devolved into a tank year, Goff should impose his Week 8 will as a high-floor, high-ceiling QB1. … After his team stumbled out of the 2019 gates, this is an opportunity for Sean McVay to put up a big score to build “momentum” ahead of the Rams’ Week 9 bye. Even as Darrell Henderson siphoned 12 change-up touches in last week’s win, Todd Gurley remained Los Angeles’ lead runner in his quad-injury return with 19 touches on 61% of the snaps and enters Week 8 ranked No. 6 in the NFL in carries inside the ten (12). The Bengals have been annihilated for 182/893/7 (4.91 YPC) rushing and 59.3 receiving yards per game by enemy backs, who all told have ten all-purpose TDs in seven games versus Cincinnati. Gurley is multi-score candidate, and Henderson can’t be ignored as a flex play. Facing the NFL’s worst run defense as nearly two-TD favorites, the Rams should amass far more than their usual number of backfield touches. Malcolm Brown (ankle) was ruled out on Thursday.

Goff’s 2019 target distribution: Cooper Kupp 77; Robert Woods 58; Brandin Cooks 44; Gerald Everett 41; Gurley 23; Tyler Higbee 22; Josh Reynolds 10; Henderson and Malcolm Brown 3. … Kupp shouldn’t struggle to bust his two-game slump one week after fellow slot WR Dede Westbrook touched up this same Bengals defense for a season-best 6/103/0 line. Kupp has eight-plus targets in 6-of-7 weeks. … Promisingly popping in Josh Hermsmeyer’s Week 8 Air Yards Model, Woods would stand to benefit if Bengals top CB William Jackson chased Cooks around the field. Cincinnati’s inability to rush the passer bodes well for both Woods and Cooks, who run higher-aDOT routes than Kupp and need time to create separation. … Among fantasy’s most-frustrating players, Cooks has cleared 75 yards once over his last 12 regular season games. He still leads the Rams in Air Yards (611) and should soon experience positive regression with so much unfulfilled opportunity. Cooks is a boom-bust WR3 in a matchup that makes him likelier to boom. … Everett has earned elite TE1 treatment leading all tight ends in targets (34) and Air Yards (337) in the last month. On the year, Everett has run 102 more routes than block-first Higbee.