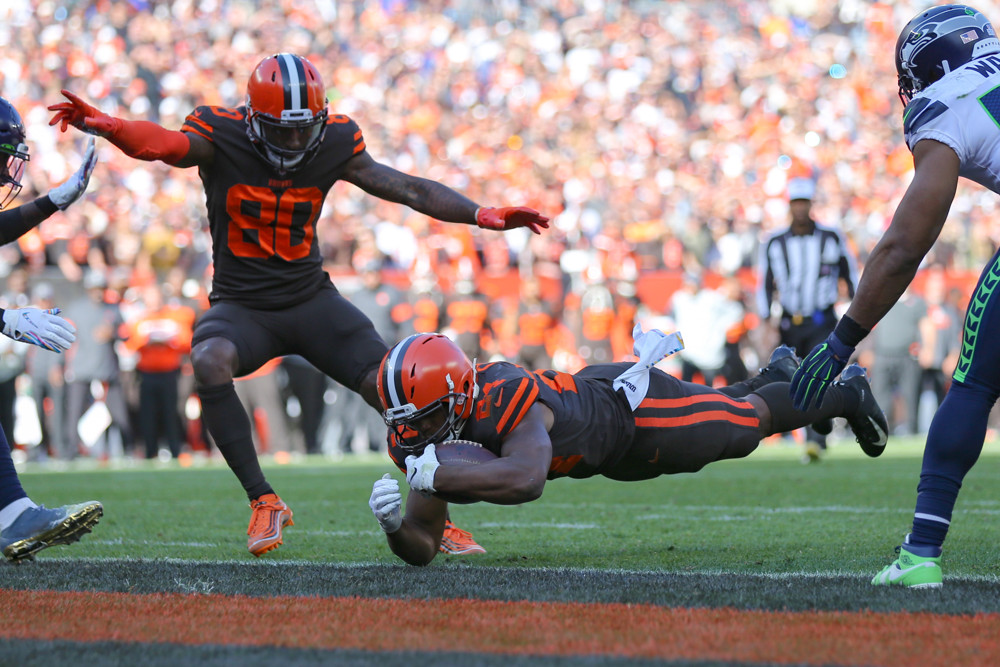 Up to 6-2 after last Sunday’s smooth-sailing win over Washington, the Bills visit Cleveland with a new lead back in Devin Singletary, who tallied Week 9 career highs in carries (21), touches (24), and total yards (140) while out-snapping Frank Gore 66% to 34%. Cleveland has kindly yielded 187/907/5 (4.85 YPC) rushing to enemy backs, presenting Singletary with a plus matchup in what projects as a neutral-script game where Buffalo’s offense should stay balanced and feed its dynamic rookie. Singletary is an upside RB2 play. … Reduced to an early-down backup grinder, Gore has been all but eliminated from Buffalo’s passing game with exactly five routes run in consecutive weeks and just one target since Week 5. He’ll be a low-floor, low-ceiling flex option going forward. … Josh Allen’s 2019 season has lacked the ceiling games that were frequent during his rookie campaign in an offense designed to counteract his wild, sometimes-detrimental ways. Likewise, the Browns’ defense held six of its last quarterbacks faced to fantasy outcomes of QB16 or worse. Still fantasy’s overall QB12 in points per game, Allen is a viable Week 10 season-long starter with a more favorable matchup on deck in Week 11 against the Dolphins.

Allen’s 2019 target distribution: John Brown 55; Cole Beasley 50; Dawson Knox 24; Singletary 16; Isaiah McKenzie 11; Duke Williams 7; Tyler Kroft and Robert Foster 5. … On pace for 84 receptions and 1,206 yards, Brown has lacked his usual spiked-week ceiling this year but continues to stay consistent with 50-plus yards and five-plus targets in 8-of-8 games. Cleveland’s secondary presents a neutral matchup, ranking 20th in fantasy points allowed to wide receivers. Due to Allen’s aggressiveness and Brown’s innate separation skills, however, Brown has matchup-proof traits and should be treated as a confident every-week WR2. … Beasley’s matchup is better against the Browns’ slot coverage, which Cooper Kupp (11/102/2), Julian Edelman (8/78/2), Tyler Lockett (5/75/0), Willie Snead (2/61/1) all shredded in the last five weeks. Beasley leads Buffalo in red-zone targets and targets inside the ten, helping to explain why he’s scored a touchdown in three straight games. Beasley has earned every-week WR3 treatment in PPR leagues. … Even as Knox has remained Buffalo’s primary tight since Kroft (foot) returned two games ago, Knox’s ensuing target counts were 1 and 2 with significant reductions in pass routes run. As rookie Knox, blocker Lee Smith, and veteran Kroft are all sharing time, Buffalo’s tight end situation has become a fantasy situation to avoid. … McKenzie – not Foster – operated as the Bills’ clear-cut third receiver in Williams’ (shoulder) Week 9 absence. Even special teamer Andre Roberts ran ahead of Foster. This passing game will continue to struggle to support more than Brown and Beasley as fantasy options.

The Browns return home after a flatly embarrassing loss to the Brandon Allen-quarterbacked Broncos to face a vastly superior-coached Bills team that is allowing the NFL’s third-fewest points per game (16.4) and has answers for Cleveland’s perpetually inept passing offense. The Browns’ best shot at generating consistent Week 10 chain movement will be to feed Nick Chubb; enemy backs have roughed up Bills coach Sean McDermott’s defense for 170/777/7 (4.57 YPC) rushing and nine all-purpose TDs through eight games. Kareem Hunt’s return from suspension does threaten Chubb’s ceiling – hotseat coach Freddie Kitchens promised this week that Hunt will have a defined role in his Browns debut – but Chubb has more than earned continued bellcow treatment with PFF’s No. 7 Elusive Rating among 47 qualified running backs and 17-plus touches in 8-of-8 games on an otherwise dysfunctional Browns team. Per Sports Info Solutions, Chubb leads the NFL in yards per carry over the past two seasons when facing fewer than eight defenders in the box. The Bills have stacked eight-plus man boxes on a league-low 0.4% of their 2019 plays. I’m standing by Chubb as an RB1 in this plus draw and waiting and seeing on Hunt’s initial role. … With just one top-12 fantasy outcome in eight starts, Baker Mayfield is an easy Week 10 fade outside of two-quarterback leagues. 7-of-8 passers to face Buffalo have finished with fantasy results of QB17 or worse.

Mayfield’s 2019 target distribution: Odell Beckham 67; Jarvis Landry 66; Chubb 32; Antonio Callaway 15; Ricky Seals-Jones and Dontrell Hilliard 14; Damion Ratley and Demetrius Harris 13; Rashard Higgins 6. … Beckham seems certain to draw Week 10 shadow coverage from Tre’Davious White, who’s given up one touchdown in his last 18 games and this year has allowed a 49.8 passer rating when targeted, fifth lowest among 115 qualified corners. Just 24th among wide receivers in PPR points this season, OBJ is a risky WR2 in this tough draw. … Fresh off busting his seven-game touchdown slump in Denver, slot man Landry is a better bet to win inside versus Buffalo’s zone coverage. With 50-plus yards in 6-of-8 games, Landry is a solid-if-unspectacular WR3 play versus the Bills. … Undeservedly running ahead of Higgins as the Browns’ No. 3 wideout, Callaway finally made a positive play on last week’s 41-yard catch and run. On the season, Callaway has 89 scoreless yards to show for his 15 targets (5.93 YPT). … Not a single tight end has cleared 50 yards against the Bills this year. Let’s look elsewhere for TE1 streamers.