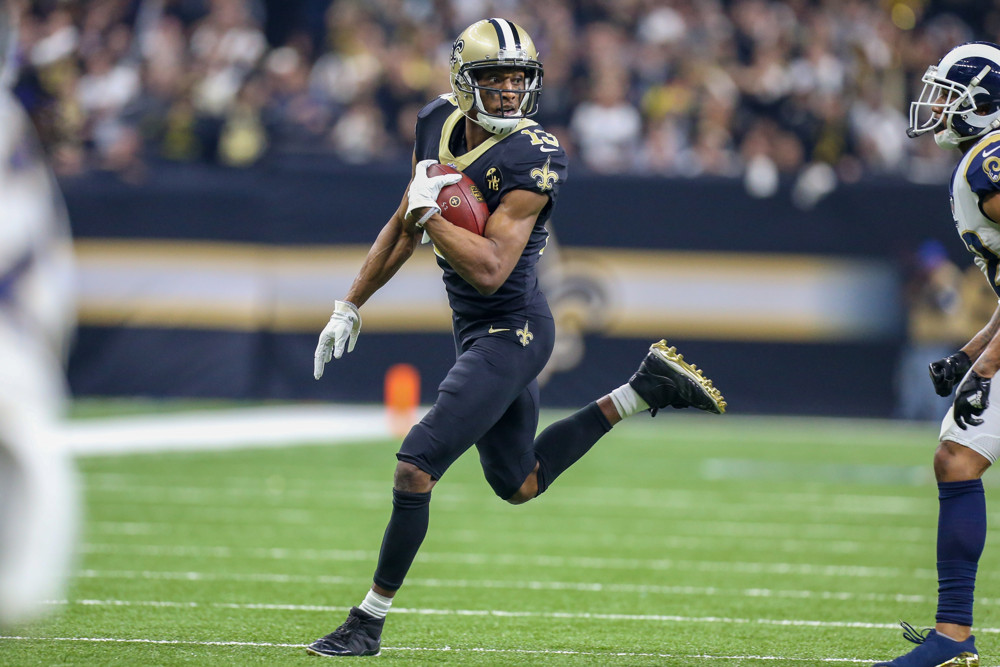 Improved to 2-2 following three straight impressive offensive efforts highlighted by last week’s road-game destruction of the previously-stout Rams, the Bucs look to stay hot against a Saints defense that was carved for QB3 (Deshaun Watson), QB9 (Jared Goff), and QB1 (Russell Wilson) fantasy results before stunningly stymieing Dak Prescott for Week 4’s QB24 score. Critical to Jameis Winston’s L.A. explosion was his squeaky-clean pocket; he took just two sacks and four hits on 43 dropbacks after averaging 3.3 sacks and 8.3 hits per game in Weeks 1-3. Saints DC Dennis Allen‘s unit won’t be nearly as giving with the NFL’s fourth-highest pressure rate (41%) and seventh-highest QB Hit Rate (18.5%). Winston also has a putrid 18:20 TD-to-INT ratio against zone coverage versus 26:6 against man since the beginning of the 2017 season (Sports Info Solutions). The Saints are playing zone at the NFL’s third-highest rate. I badly bricked on believing Winston would struggle in L.A. last week, but the data has me doubling down on New Orleans’ D/ST. In DFS, they’re virtually certain to go low owned. … Running with newfound aggressiveness inside the tackles and teasing his college track-star speed, Ronald Jones pulled away from Peyton Barber and Dare Ogunbowale against the Rams by leading the backfield in touches (20) and snaps (49%) despite losing 54- and 25-yard runs to largely innocuous penalties. Per PFF, Jones’ nine broken tackles tied Alvin Kamara and Chris Carson for most among NFL backs in Week 4. Jones’ floor remains low with just three targets on the year, but he is the Bucs’ only flex-viable back at New Orleans. The Saints have yielded an unimposing 78/332/2 (4.26 YPC) rushing line to enemy backs.

Jameis’ Weeks 1-4 target distribution: Mike Evans 35; Chris Godwin 34; Ogunbowale 13; O.J. Howard and Breshad Perriman 12; Cameron Brate 9; Barber 8; Bobo Wilson 6; Jones 3; Justin Watson 1. … Back on fire following his early-season illness, Evans leads the NFL in Air Yards by a whopping 89-yard margin over the past two weeks and is back on pace for 140 targets, which would be his most since 2016. Evans will almost certainly draw Week 5 shadow coverage from Marshon Lattimore, who struggled mightily in Weeks 1-3 before all but eliminating Amari Cooper (5/48/0) last Sunday night. A boom-bust WR1 play at the Superdome, Evans’ four career stat lines against Lattimore are 4/86/0 > 7/147/1 > 5/55/0 > 1/13/0. … Godwin’s matchup is friendlier; teams targeting New Orleans’ slot coverage are 24-of-32 passing (75%) for 315 yards (9.8 YPA) and two touchdowns, highlighted by Tyler Lockett (11/154/1) and Cooper Kupp’s (5/120/0) big games. With Howard making no headway, the Bucs’ target distribution is even narrower than we anticipated before the season, raising Evans and Godwin’s floor and ceiling. … Howard’s play continues to be far too poor for Bruce Arians to elevate his usage. Howard is PFF’s No. 67-graded run-blocking tight end among 67 qualifiers and 62nd in pass blocking with three penalties, including a hold that negated Jones’ aforementioned 54-yard run in last week’s victory. Perhaps Howard will pick it up later in the season, but fantasy leaguers should be streaming over him at this point.