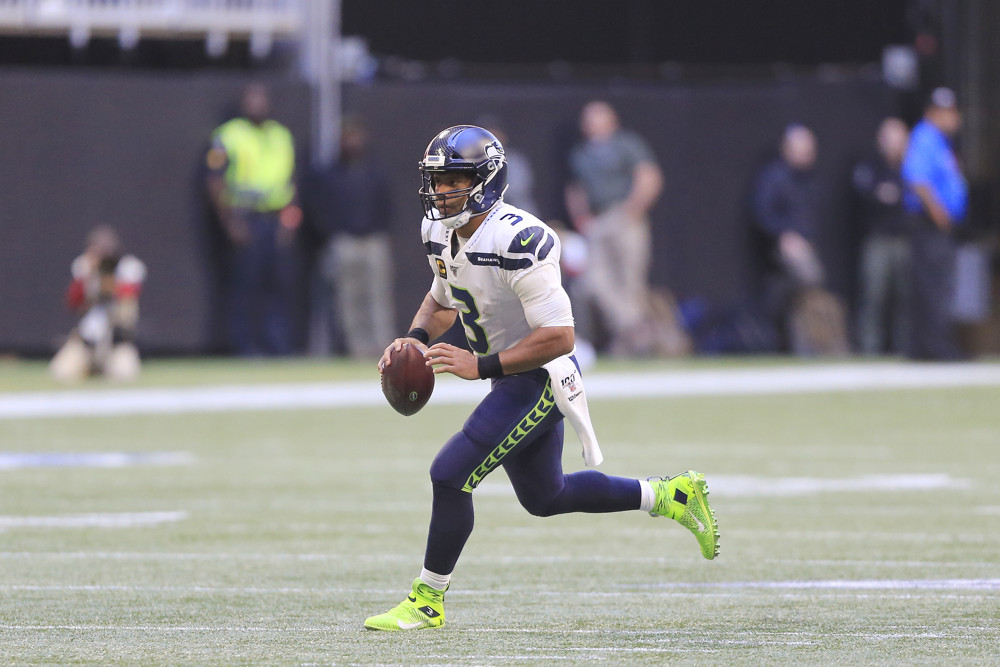 Seattle’s D/ST is among Week 9’s top streamers favored at home by nearly a touchdown against Jameis Winston, who’s committed 15 turnovers in seven starts and took 16 sacks over his last three. Although the Seahawks’ pass rush has lacked all year, it could easily spike at deafening CenturyLink Field versus a Tampa Bay pass “protection” unit that ranks bottom four in sack rate (9.6%) and QB Hit Rate (19.6%). … Winston remains DFS-tournament and season-long playable in this potential shootout; five straight quarterbacks to face Seattle have top-12 results, including otherwise-struggling Baker Mayfield (QB9) and the petrified remains of Matt Schaub (QB10). Despite his penchant for giving the ball to the other team, Jameis is the QB9 in fantasy points per game. … The Bucs kept their three-way RBBC coming out of Week 7’s bye; Peyton Barber led the backfield in Week 8 snaps (35%) against the Titans, Ronald Jones barely edged him in touches (12 to 11), and Dare Ogunbowale stayed active as Tampa Bay’s designated passing-down back, out-snapping Jones 33% to 26%. Even as Bucs’ best running back talent, Jones has totaled 56 yards or fewer in four of Tampa’s last six games. Jones is the best flex option at Seattle if forced to choose, but he isn’t a very good one with a low floor as an underdog on the road.

Jameis’ 2019 target distribution: Mike Evans 67; Chris Godwin 63; Ogunbowale 24; Cameron Brate 20; O.J. Howard 18; Breshad Perriman 16; Barber 12; Jones, Scotty Miller, and Bobo Wilson 10. … Fresh off his second 190-plus-yard game of the year, Evans should stay hot against a Seahawks defense that has allowed the NFL’s eighth-most catches (104) and tenth-most yards (1,322) to wideouts. The ball goes to only two players in Tampa Bay’s passing attack, which should more often than not stabilize Evans’ ceiling and floor, especially in plum matchups like this. Evans also ranks No. 2 in the NFL in end-zone targets (11) despite an early bye. … At- or above-expectation stat lines by fellow slot WRs Cooper Kupp (9/117/1), JuJu Smith-Schuster (5/84/0), Tyler Boyd (8/60/0), and Russell Gage (7/58/0) against Seattle provide optimism for Godwin to rebound from last week’s 4/43/0 clunker against the Titans. Evans and Godwin are both DFS game-stack components in this projected high-scoring affair. … Gerald Everett (7/136/0), C.J. Uzomah (4/66/0), Austin Hooper (6/65/1), Ricky Seals Jones (4/37/1), Tyler Higbee (3/47/0), and Vance McDonald (7/38/2) have all beaten box-score expectations against Seattle, which is allowing the NFL’s fourth-most fantasy points to tight ends. With Howard (hamstring) injured and reportedly on the trade block, Brate should get another start after establishing Week 8 season highs in playing time (67%), routes run (40), and targets (6) against the Titans. The projected nature of this game combined with Brate’s usage and matchup keep him squarely in TE1 contention.

Seattle’s Week 8 build of a comfortable 24-0 first-half lead always boded poorly for Russell Wilson’s box-score outlook in Atlanta; Pete Carroll’s staff prefers to add hair to its back with close rather than convincing wins. Regardless of deficits, we can confidently expect Rick Vaughn QB Jameis Winston and no-risk-it, no-biscuit coach Bruce Arians to keep the pedal to the Week 9 metal, while Tampa Bay’s pass-funnel defense has coughed up top-15 quarterback results in five straight games, including top-four outcomes to Daniel Jones (QB2), Jared Goff (QB4), and Teddy Bridgewater (QB4). This is a fade-recency spot for Wilson, who leads the NFL in passer rating when blitzed. Bucs DC Todd Bowles‘ defense blitzes at the highest rate in the league. … Although Seattle’s loss of C Justin Britt (ACL) hurts ahead of a matchup with space eaters Ndamukong Suh and Vita Vea, Tampa’s run-defense stoutness shouldn’t discourage anyone from teeing up Chris Carson as a six-point home-favorite bellcow with 20-plus touches in five straight games. Running back is a volume-over-efficiency fantasy position, and no coaching staff has ensured its lead runner’s usage is more secure amid game-costing fumbles, the front office’s over-draft of Rashaad Penny, and outwardly spoken sentiments than Carroll and his staffs with regard to Carson.