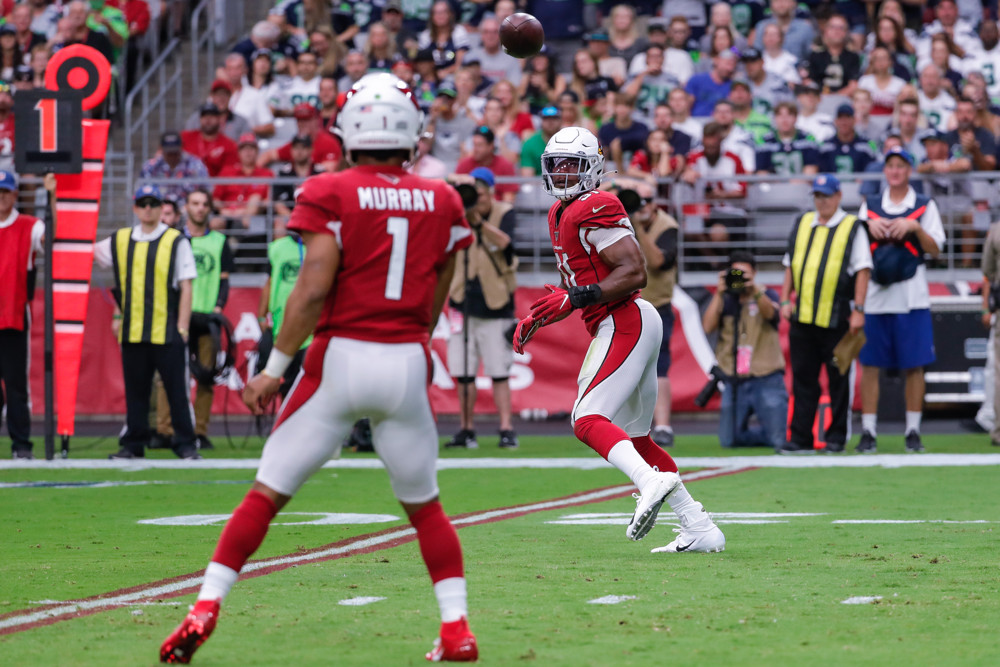 In a battle of winless teams, the Cardinals visit Cincinnati with David Johnson in breakout position after the Bengals were ethered for a 100/477/5 (4.77 YPC) rushing line by enemy backs in Weeks 1-4 and yielded a league-high 290 receiving yards to Johnson’s position. Despite missing much of Week 2 with a wrist scare, Johnson is tied with Christian McCaffrey for most routes run among NFL backs (127) and has catch totals of 6, 6, and 8 in his three full games. A shoo-in every-week PPR RB1, Johnson continues to go too-low owned in DFS tournaments. If coach Kliff Kingsbury is smart, he will explore the idea of using Johnson in the slot to mitigate Christian Kirk‘s (ankle) injury and Chase Edmonds as Arizona’s primary tailback more. … Kyler Murray’s Weeks 1-4 fantasy results were QB13 > QB18 > QB15 > QB12, showing a high floor without revealing his ceiling. Murray’s Week 5 outlook is improved by Cincinnati’s allowance of the NFL’s tenth-most quarterback rushing yards and inability to generate pressure with the league’s second-fewest sacks (5) and seventh-fewest QB hits (18). Murray is an underrated DFS-tournament play in this plum draw, ideally paired with Johnson and/or Larry Fitzgerald.

Murray’s Weeks 1-4 target distribution: Fitzgerald and Kirk 36; Johnson 28; KeeSean Johnson 19; Damiere Byrd 18; Charles Clay 6; Chase Edmonds 5; Trent Sherfield 4; Maxx Williams 3. … As much as Adam Levitan will hate to admit it, Kirk’s ankle injury elevates Fitzgerald’s floor and ceiling into WR1 range by refocusing Arizona’s passing game from three prominent members (Kirk, Johnson, Fitz) to two (Johnson, Fitz). In an offense averaging 42.2 pass attempts per game – third most in the league – Fitz looks like one of the safest fantasy plays on the Week 5 slate. … With Byrd (hamstring) still on the shelf, KeeSean belongs in WR4 discussion against the Bengals, who yielded useful games to fellow outside WRs D.K. Metcalf (4/89/0), Deebo Samuel (5/86/1), Diontae Johnson (6/77/1), and Marquise Goodwin (3/77/1) in Weeks 1-4. … Second-round pick Andy Isabella has a shot at an expanded role with Kirk on the shelf and should be picked up in 12- and 14-team season-long leagues; Kirk ranked No. 8 in the NFL in targets before going down. Isabella is often criticized for his tiny catch radius, tendency to let passes into his body, and unorthodox routes, but he ran 4.31 at the Combine and led the entire nation in yards per route run (4.15) as a senior at UMass. Isabella’s competition is Pharoh Cooper, who played slot receiver for Arizona this preseason. Update: Coach Kliff Kingsbury stated Wednesday that Isabella will compete for playing time outside with Sherfield and KeeSean. Cooper now looks like Arizona’s No. 2 slot receiver, giving him PPR-specific WR4 dart-throw appeal in such a high-volume role.

It may seem unthinkable for anyone who watched last Monday night’s massacre at Heinz Field, but this is a sneaky rebound spot for Cincinnati returning home after a nationally-televised embarrassment to face a bad Arizona team traveling cross country for a 1pm ET start. Cardinals DC Vance Joseph’s defense has been skewered for top-six QB1 results in 3-of-4 games, has a 10:0 TD-to-INT ratio against, and has allowed the NFL’s fifth-most yards per pass attempt (8.5). Offenses facing the Cardinals are averaging the league’s fourth-most plays per game (67.5), increasing box-score opportunity across the board. I like Andy Dalton as an underrated QB1 streamer and extremely low-owned DFS-tournament play in stacks with Tyler Boyd and/or Auden Tate. … At least until he visits Miami in Week 16, this is the best matchup Joe Mixon will get all year. Arizona has allowed the NFL’s fifth-most rushing yards (586) and fourth-most rushing attempts per game (30.8) and resurrected Chris Carson’s season in Week 4 (22/104/0). Mixon set year highs in snaps (63%) and touches (19) against the Steelers. He’s an upside RB2 versus the Cards.

Dalton’s Weeks 1-4 target distribution: Tyler Boyd 39; John Ross 32; Auden Tate 18; Tyler Eifert 16; Mixon 15; Giovani Bernard 14; Damion Willis 9; Alex Erickson 8; C.J. Uzomah 7; Drew Sample 3. … The Cardinals have allowed completions on 29-of-39 slot targets (74.4%) for 345 yards (8.85 YPA) and four touchdowns, boding well for Boyd, who has run 71% of his routes inside over the past three weeks. In hindsight, Boyd’s Week 4 flop wasn’t so surprising when you consider Dalton threw for a season-low 171 yards. Arizona is allowing 271.0 passing yards per game, and Dalton averaged 326.3 in Weeks 1-3. … As Ross averaged eight targets and a team-high 94.3 Air Yards in the season’s first month, his shoulder injury frees up a ton of opportunity. Boyd stands to benefit some, but Tate will too after he led Cincinnati in receiving in each of the last two games, playing 90% of the Bengals’ offensive snaps. Also popping in Josh Hermsmeyer’s Air Yards Buy Low Model, Tate offers Week 5 breakout potential in this plum draw. … Ross was placed on I.R. Wednesday and can be safely dropped in season-long leagues. … The Bengals kept Eifert’s playing time below 50% in each of their first four games but may have to loosen his leash minus Ross and A.J. Green (ankle) sounding like he won’t be back anytime soon. This is certainly the optimal week to do so from a matchup standpoint; T.J. Hockenson (6/131/1), Mark Andrews (8/112/1), Greg Olsen (6/75/2), and Will Dissly (7/57/1) have all flamethrowered the Cards.