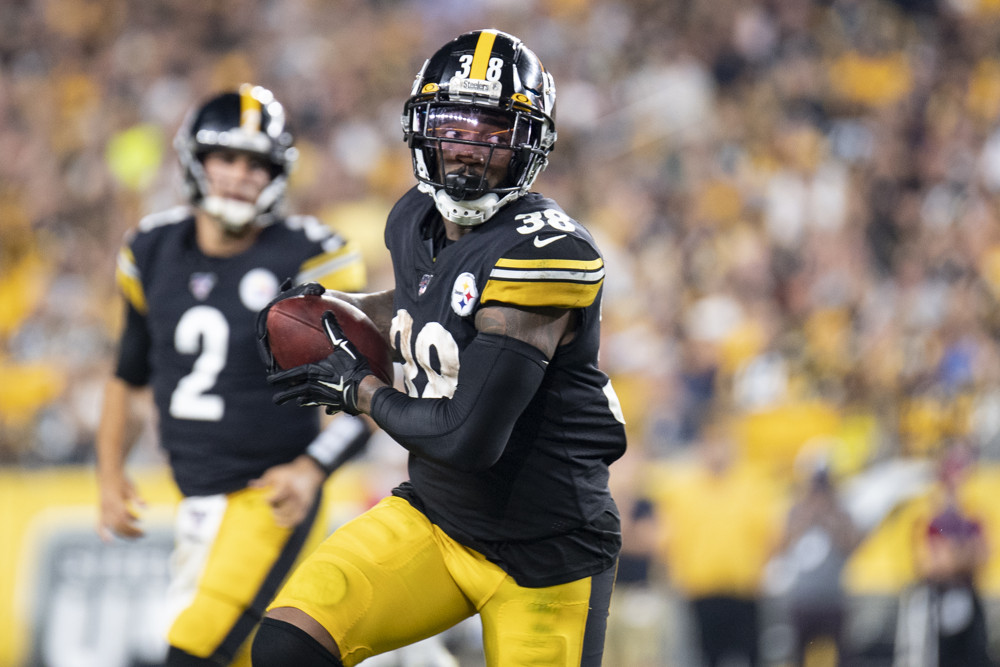 The Colts visit Heinz Field for a projected low-scoring affair facing a red-hot Pittsburgh defense that has carried the team to wins in three of its last four games with an overtime loss to Baltimore mixed in. The Steelers rank top five in sack rate (8.9%) and lead the league in QB Hit Rate (19.6%) while holding each of their last five quarterbacks faced to fantasy outcomes of QB14 or worse, including by-far Lamar Jackson’s lowest score (QB17) of the year. While Indianapolis’ studly offensive line gives Jacoby Brissett a puncher’s chance at beating expectations – Establish The Run Trenches specialist Brandon Thorn noted this week that the Colts are the only NFL team whose front-five starters have yet to miss a single 2019 snap – ultimately this matchup is too daunting to consider Brissett more than a confident two-QB-league play. … Marlon Mack is a fade-matchup, trust-volume RB1/2 at Pittsburgh with 20-plus touches in 5-of-7 games. Having held enemy backs to an anemic 158/593/4 (3.75 YPC) rushing line and only 44.7 receiving yards per game, the Steelers generate tackles for loss on over a quarter of opponent run plays.

Brissett’s post-bye week target distribution: T.Y. Hilton 17; Jack Doyle 10; Eric Ebron and Zach Pascal 9; Nyheim Hines 5; Mack and Chester Rogers 4; Parris Campbell and Jordan Wilkins 1. … Playing on grass at Heinz Field places Hilton in a suboptimal setting; in his career, T.Y. loses over two yards per target and his touchdown probability dips from 46% to 30% when playing indoors versus outdoors. It doesn’t help that Steelers outside CBs Joe Haden and Steven Nelson are playing at high levels, having combined to allow completions on 33-of-56 attempts (58.9%) for 385 yards (6.88 YPA) and only two touchdowns. Hilton is a volume- and talent-driven WR2 play with a questionable ceiling. Pittsburgh is one of just two remaining teams yet to allow a single 100-yard game to an enemy wideout. … Doyle and Ebron continue to cancel each other out as fantasy options; each has cleared 50 yards in just 1-of-7 games, while their 2019 target totals are nearly identical with Doyle at 30 and Ebron 29. … The Colts rewarded Pascal for his Week 7 100-plus-yard game by elevating his snaps to a season-high 92% in last Sunday’s win over Denver, yet he drew only two targets and has commanded more than three targets in just 2-of-7 games this year. Every skill player in Indy’s offense remains a low-floor crapshoot behind Mack and Hilton.

Although playing on a short week following Monday night’s win over Miami makes it much less of a guarantee, James Conner appears poised to gut out the AC joint sprain in his shoulder against the Colts, who’ve provided enemy backs with unimposing matchups by yielding a 138/606/3 (4.39 YPC) rushing line to Conner’s position. The centerpiece of Pittsburgh’s post-Ben Roethlisberger offense, Conner enters Week 9 with six touchdowns over his last six games and 17-plus touches in four of his last five. Back from his in-season knee scope, Jaylen Samuels should still be rostered in all season-long leagues with Benny Snell (knee) sidelined and bruising-back Conner constantly picking up minor nicks. Samuels would be a legit RB1 on the off chance Conner misses this game. … Lacking any modicum of rushing value and yet to exceed 251 passing yards on the year, game-manager Mason Rudolph is just a two-QB-league option versus Indy, whose disciplined zone defense caps quarterback ceilings by stamping out big passing plays. Despite facing a to-date schedule consisting of Patrick Mahomes, Deshaun Watson, Matt Ryan, and Philip Rivers, Colts DC Matt Eberflus’ unit has conceded the league’s ninth-fewest 20-plus-yard completions (23) and has yet to allow a weekly fantasy result above QB8 while holding five of its last six quarterbacks faced to QB12 finishes or worse. Rudolph is a low-floor, low-ceiling Week 9 bet.

Rudolph’s 2019 target distribution: JuJu Smith-Schuster 29; Diontae Johnson 27; James Washington 17; Conner 15; Vance McDonald 12; Samuels 11; Nick Vannett 5; Donte Moncrief 3. … Falsifying the pre-season narrative that he would “struggle without A.B.,” JuJu is averaging 2.0 more yards per catch and a full yard more per target than he did with Antonio Brown last year. JuJu’s problem has been seeing nearly four fewer targets per game post-Big Ben, but his floor has held steady with 75-plus yards and/or a touchdown in five of Pittsburgh’s six non-Devlin Hodges games. Smith-Schuster runs most of his pass routes inside, where the zone-based Colts have permitted completions on 41-of-55 slot targets (75%) this year. The nature of the Steelers’ Rudolph-quarterbacked offense has pushed Smith-Schuster into WR2/3-play territory, but he’s a good one here. … This game sets up better for JuJu than Johnson, who has thrived on splash plays the Colts’ defense is specifically designed to halt. Johnson has scored TDs of 39, 43, and 45 yards in length, and otherwise has 169 yards in seven games (24.1-yard average). This is a week where Johnson’s odds of hitting another deep completion are reduced. … College shower narrative and all, Washington has been a complete and fairly predictable dud this season. Washington played a season-low 47% of last week’s offensive snaps. … McDonald’s matchup sets up nicely – Indy allows the NFL’s seventh-most fantasy points per game to tight ends – but McDonald has yet to top 40 yards in a 2019 game and has exceeded four targets in 1-of-6 tries. He’s a Hail Mary streamer against the Colts.