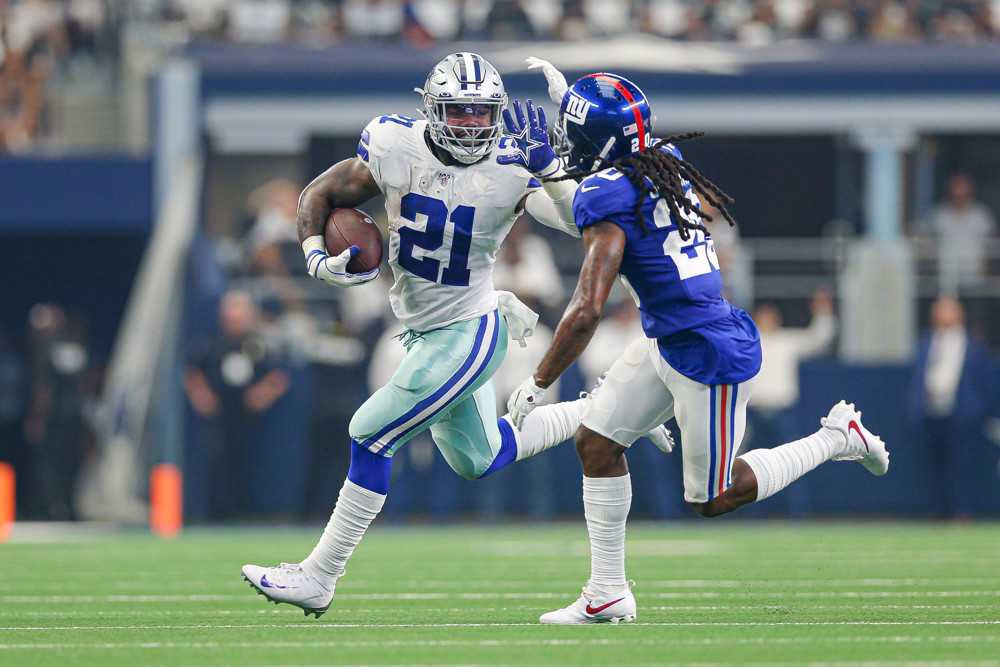 Early MVP candidate Dak Prescott is an easy top-five QB1 play versus the hapless Fins after completing 51-of-62 passes (82.5%) for 674 yards (10.8 YPA), seven touchdowns, and one pick in Weeks 1-2, where Prescott logged fantasy results of QB2 and QB3. Miami was smoked by Lamar Jackson (QB1) and Tom Brady (QB5) in its first two games, showing zero resistance with three combined sacks and five QB hits. Rookie OC Kellen Moore’s dressed-up Dallas offense ranks fifth in the NFL in points (66) and hasn’t shied away from using Dak as a runner. Prescott has 81 rushing yards through two games and broke a career-long 42-yard run on a run-pass option in the second quarter of last week’s win over Washington. The Cowboys also have the highest team total of Week 3. … Cowboys team stacks are Week 3 playable with Ezekiel Elliott near the forefront after his snaps rose from 54% in Week 1 to 77% in Week 2, and his touches spiked from 14 to 25. Tony Pollard nearly vultured a three-yard touchdown, but it was negated by Amari Cooper’s holding flag. Pollard is a handcuff only after managing five touches against the Skins. As a three-score home-favorite bellcow, this is a sensational spot for Elliott facing a tanking Miami team that got trucked for 67/306/3 (4.57 YPC) rushing by Ravens and Patriots backs in Weeks 1-2. Despite being eased in following his training-camp holdout, Elliott already leads the NFC in red-zone carries (8).

Dak’s target distribution: Michael Gallup 15; Cooper 14; Randall Cobb 11; Jason Witten 8; Zeke and Blake Jarwin 4; Devin Smith 3; Pollard and Tavon Austin 1. … As Gallup leads the Cowboys in targets and Air Yards (193), his 2-4 week knee injury frees up lots of opportunity for other Dallas pass catchers. Even if Cooper draws Dolphins top CB Xavien Howard’s coverage – Howard put Week 2 clamps on Josh Gordon (2/19/0) – fantasy leaguers should focus more on Amari’s likely volume bump than his WR/CB draw. … Gallup had only one catch for eight yards on slot routes, so slot WR Cobb is less likely to benefit from the injury. Still, Sunday’s matchup with Miami’s swiss-cheese defense gives Cobb WR4 and DFS-tournament usability in a game where Dallas should pour on points. … Smith deserves to jump directly into Gallup’s No. 2 seat after earning a roster spot as a training-camp longshot by dominating preseason (14/188/1), then exploding in Week 2 (3/74/1) despite playing only 26% of the Cowboys’ snaps. Smith cooked Josh Norman for his 51-yard touchdown on a well-placed Prescott pass off play action. Especially against an opponent this soft, Smith should be upgraded into boom-bust WR3/flex territory versus the Dolphins. … Playing over 70% of Dallas’ snaps but mostly blocking, Witten is a touchdown-or-bust punt with target counts of 4 and 4. His matchup couldn’t get easier, of course; Dolphins opponents are a perfect 16-of-16 passing for 208 yards (13.0 YPA) and a touchdown when targeting tight ends.

The story remains the same when assessing ways to approach the Dolphins’ offense; you largely ignore their skill players and tee up the defense facing them. The Ravens posted Week 1’s DST7 score against the Fins, before New England’s slate-breaking DST1 result with over 30 fantasy points last week. Dallas’ D/ST is a crucial piece in team stacks. … Only two Dolphins pass catchers have topped 31 yards in a game so far; DeVante Parker’s 3/75/0 outcome in Week 1 and Preston Williams (4/63/0) last week. Parker ranks second in the NFL in Air Yards (310) but has only the 75 real-life yards to show for them. Even at peak to-date inefficiency, I’ve seen worse DFS-tournament plays than Parker would be at JerryWorld. … As a fallout from their utter lack of talent, the Dolphins’ biggest problem has been their inability to sustain drives on offense. Through two weeks, Miami is losing the time-of-possession battle 76.5 to 43.5. … Kenyan Drake got a small something going in last Sunday’s blowout loss to the Pats, managing 48 yards on 11 touches with five catches on 55% of the snaps. Drake has some low-end, PPR-specific flex hope facing a Cowboys defense that has allowed the NFL’s third-most running back catches (16).