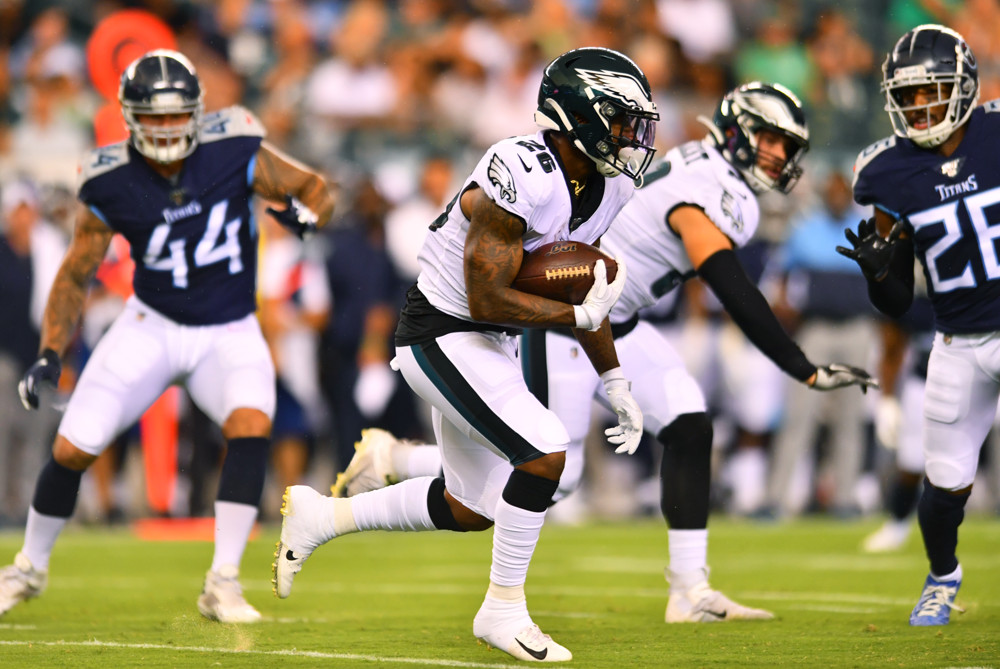 Held to 10 and 9 points in their last two games and losers of four of their last six, the Eagles badly need an offensive spark and may get one in Miami with Lane Johnson (concussion), Alshon Jeffery (ankle) Nelson Agholor (knee), and Brandon Brooks (illness) all due back to push Philly’s offense toward full strength. Miami’s defense has been rocked for top-12 QB1 scores in 7-of-11 games and the NFL’s fourth-most fantasy quarterback points on the year. Carson Wentz remains a leap-of-faith streamer coming off five straight starts of QB17 or worse, but you couldn’t draw up a better get-well spot for a struggling passer. … Especially with Jordan Howard (shoulder) not yet cleared, Miles Sanders continues to project as Philly’s feature back following consecutive playing-time clips near 85% and 15 touches in last week’s loss to Seattle, including 12 carries and five targets. While Sanders’ recent box-score results have underwhelmed – he’s scoreless since Week 8 – Sanders’ lead-back stranglehold has strengthened in Howard’s absence, especially after Boston Scott disappeared from last week’s game plan and Jay Ajayi was predictably useless with 16 scoreless yards via six carries on 11% of the snaps. Sanders is a full-confidence RB2 play in season-long leagues facing Miami, which has surrendered 171.6 total yards per game to enemy backs. The Eagles desperately need to resume feeding Sanders passing-game looks.

Zach Ertz is expected to gut out a hamstring injury he played through last week, parlaying an 86% snap rate into a season-high 12 catches against Seattle. Easily Wentz’s most-trusted pass option, Ertz should have no trouble smashing a Dolphins defense that’s allowed the NFL’s eighth-most yards to tight ends (619). … Dallas Goedert established Week 12 season highs in snaps (88%), routes (42), and catches (7) and has now played at least 75% of Philly’s offensive snaps in four straight games. Even with Jeffery and Agholor due back, Goedert remains low-end TE1 playable in Sunday’s plus draw. … Jeffery’s health and lack of recent production render him a boom-bust WR3 option, even in a favorable spot at Miami. An entirely touchdown-reliant player, Jeffery hasn’t reached 80 yards in a regular season game since last Week 16. … Agholor has topped 50 yards once all season, but this should be the week he gets back over that hump. Popping as Week 13’s No. 5 buy-low player in Josh Hermsmeyer’s Air Yards Model, Agholor faces a Dolphins defense that has allowed 8.04 yards per attempt and eight touchdowns on 90 slot targets this year, including Jarvis Landry’s Week 12 eruption (10/148/2). … Coach Doug Pederson spoke this week of promoting J.J. Arcega-Whiteside into a featured role against Miami, although Jeffery and Agholor’s returns create obstacles in front of JJAW’s volume. I’m chalking him up as a boom-bust WR4.

While the Dolphins create their own pass-funnel offense by continuing to trot out historically inefficient Kalen Ballage, it stays incumbent upon Ryan Fitzpatrick to create results week in and week out. Since replacing Josh Rosen for good in Week 6, Fitzpatrick has three top-seven QB1 scores and finished QB17 or worse in each of his other four starts. Meanwhile, 11-of-11 DSTs to face the Dolphins have banked top-12 defense results. Especially with the Eagles’ defense peaking, this is a great week to fire up Philly’s D/ST. Fitzpatrick is usable in two-QB-leagues and as a Hail Mary DFS-tournament play. … Ballage’s job security is tenuous at best with UDFA rookie Patrick Laird’s snap rates on the weekly rise (11% > 23% > 37%) and seventh-rounder Myles Gaskin coming off a season-high five touches. While this backfield is worth monitoring by deep leaguers, it’s an obvious situation to avoid against Philly’s run-tough front.

Fitz’s 2019 target distribution: DeVante Parker 67; Mike Gesicki 40; Allen Hurns 29; Albert Wilson 28; Ballage and Jakeem Grant 19; Laird 9; Gaskin 3. … Still fantasy’s most-undervalued player, Parker enters Week 13 with 55-plus yards and/or a touchdown in 10-of-11 games. Since Preston Williams tore his ACL in Week 9, Parker ranks No. 8 in Air Yards (324), No. 3 in targets (31), and No. 6 in receiving yards (295). The Eagles’ defense has improved lately, but Parker’s volume is impossible to ignore as an every-week WR3 with WR1 upside. … Wilson (ribs) and Grant (ankle) are both at risk of missing the rest of the year, further stabilizing Hurns’ No. 2 wideout role. Hurns hasn’t cleared 55 yards all year but set season highs in targets (7) and snaps (90%) last week and proved an excellent DFS-adjusted value. Hurns’ job security is safe after Miami gave him an in-season extension. … Gesicki scored his first NFL touchdown in last week’s loss to Cleveland and has drawn six-plus targets in four straight games. Usage places Gesicki in low-end TE1 contention at fantasy’s weakest position in a lopsided Week 13 pass-funnel matchup.