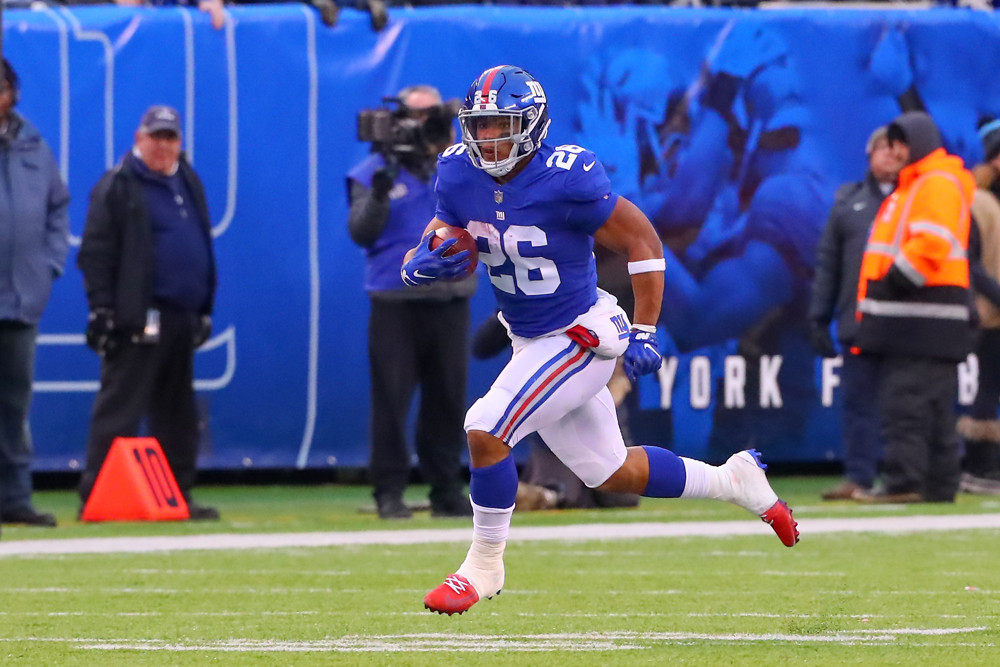 After a two-week break the Giants attributed to a high ankle sprain, Daniel Jones returns as a target for Washington’s D/ST. Jones may play at less than 100%, and he was a defense-friendly quarterback before going down with a whopping 21 turnovers and 33 sacks absorbed over Jones’ initial ten starts. As just 4 of the last 12 quarterbacks to face Washington have banked top-12 fantasy outcomes, Jones’ individual value is limited to two-QB leagues. … Even without one of his once-trademark monster plays – his long gain was 12 yards – Saquon Barkley parlayed Week 15’s plus draw versus Miami into his best fantasy game of the year. He now encounters another mouth-watering spot; Washington concedes the NFL’s fifth-most yards rushing (114.4) and sixth-most yards receiving per game (50.9) to enemy backs and was throttled for 237 yards and two TDs by the Eagles’ backfield last week. Barkley is an elite RB1 play again.

Fresh off easily his season-best outing in last Sunday’s shootout loss to the Eagles, Dwayne Haskins encounters a draft-day revenge game against the Giants, who famously bypassed him for Daniel Jones at the No. 6 overall pick. This is the best matchup Haskins will catch all year; New York’s pass rush has been M.I.A. throughout 2019, and the G-Men cut top CB Janoris Jenkins prior to Week 15. A league-high 13-of-14 quarterbacks to face the Giants have banked top-12 fantasy finishes. Haskins suddenly looks like a realistic two-QB-league starter worthy of DFS-tournament consideration in stacks with Terry McLaurin. … One potential Haskins obstacle is the possibility run-committed Bill Callahan simply rides Adrian Peterson all day long. Peterson ran as effectively as any back has all season on Philadelphia last week, finishing with 91 yards and a touchdown on 19 touches. The bad news for Peterson is the Giants’ run defense has stiffened since acquiring DT Leonard Williams from the Jets, limiting enemy backs to a 113/353/2 (3.12 YPC) rushing line over the last five weeks. The good news is this sets up as a neutral-script game where the score is unlikely to get out of hand and Peterson can stay fed. Peterson’s touch counts in the last six games Derrius Guice (MCL, I.R.) missed or left early are 19 > 20 > 19 > 16 > 20 > 25.

Haskins’ 2019 target distribution: McLaurin 39; Steven Sims 29; Kelvin Harmon 28; Jeremy Sprinkle and Chris Thompson 16; Trey Quinn 11; Peterson 10; Wendell Smallwood 7. … Haskins’ slow-but-tangible progress combined with McLaurin’s improving results should enhance confidence in McLaurin as a bankable WR2 with WR1 upside in this plus draw. He should have little trouble disposing of Giants outside CBs DeAndre Baker and Sam Beal, who’ve combined to concede 807 yards (9.4 YPA) and eight TDs (9.3% TD Rate) on 86 targets. McLaurin has topped 70 yards and/or scored a touchdown in three of Washington’s last four games. … Sims left a ton of Week 15 yards on the field with a pair of drops, but he put himself on the deep-sleeper map with 11 targets against the Eagles and has played 70% or more of the Redskins’ offensive snaps in consecutive games. Sims has overtaken Quinn at slot receiver, where Julian Edelman (9/113/0), Danny Amendola (8/95/0), Cole Beasley (4/83/0), Jamison Crowder (5/81/1), Anthony Miller (6/77/0), Randall Cobb (4/69/1), and Albert Wilson (5/59/0) have given the G-Men fits. Sims also popped as Week 16’s No. 5 player in Josh Hermsmeyer’s Buy Low Air Yards Model. … Harmon is locked in as Washington’s No. 2 perimeter wideout after Paul Richardson went on I.R. but has been quieter than his teammates with a scoreless 34.2-yard average in Haskins’ starts. … Sprinkle is still operating as Washington’s full-time tight end but has 13 yards on two targets in the last two games.