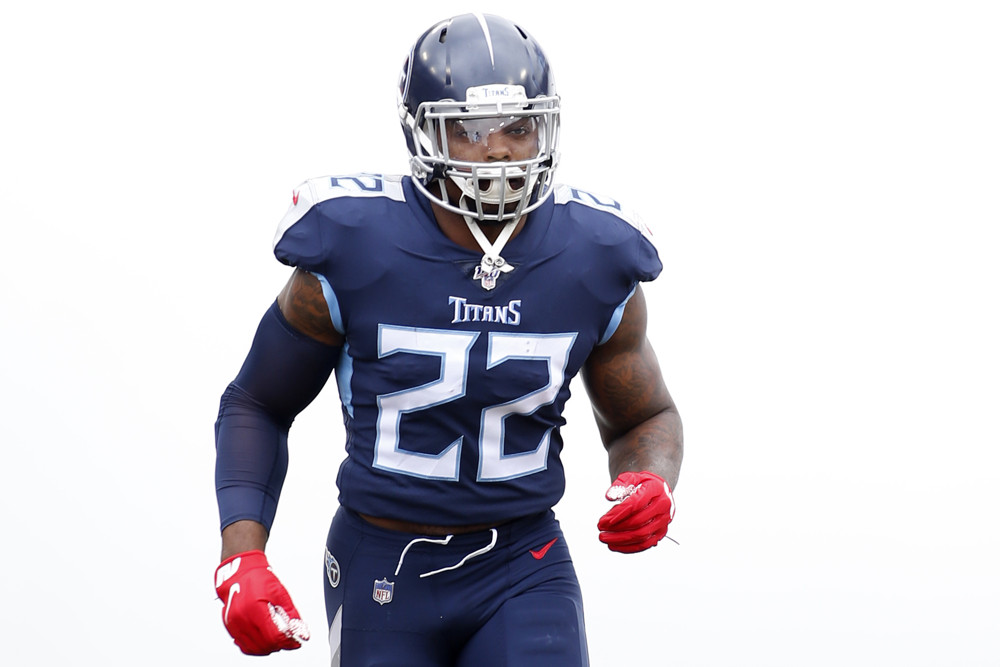 Nick Foles makes his third Jaguars start in a difficult road trip to Nashville in what sets up as a grinding, low-scoring affair. Titans DC Dean Pees’ unit has yielded the NFL’s eighth-fewest points per game (19.7) but does have enough pass-funnel qualities for Foles to be considered a confident two-QB-league play. Enemy passers have a 17:9 TD-to-INT ratio against Tennessee, which is giving them clean pockets more often than not by ranking 18th in sack rate (6.8%) and 26th in QB Hit Rate (13.5%). Facing the Bucs, Chargers, Raiders, and Falcons in his next four, I still like Foles as a stretch-run buy. … Even as negative script has hindered Leonard Fournette for subpar touch counts of 16 and 15 in consecutive blowout losses, Fournette stayed afloat with 12 catches on 13 combined targets against the Texans and Colts and has five-plus catches in three straight games. Although Tennessee has limited enemy backs to 4.04 yards per carry, only five teams have allowed more running back receptions (63). We have called Fournette a buy since early in the season and won’t stop now. He could easily lead the NFL in Weeks 12-17 touches.

Foles’ 2019 target distribution: D.J. Chark 17; Chris Conley 10; Fournette 9; Dede Westbrook 6; RyQuell Armstead and Josh Oliver 2; Ben Koyack 1. … Foles is 10-of-17 passing for 146 yards (8.6 YPA) and three TDs when targeting Chark this year, while Tennessee’s secondary is most vulnerable outside, where Chark runs 77% of his routes. Titans RCB Malcom Butler (broken wrist) fill-in LeShaun Sims is especially burnable, having coughed up completions on 23-of-31 targets (74%) for 274 yards (8.84 YPA) and three touchdowns over the past two seasons. Chark is a WR2 with WR1 upside in this plus draw, while Conley warrants WR3/flex consideration after drawing 93 Air Yards and eight targets in Foles’ Week 11 return. Promisingly, Conley popped in Week 12’s Buy Low Air Yards Model and is likely to go overlooked in DFS tournaments. … Westbrook catches the toughest Week 12 matchup in Jacksonville’s pass-catcher corps versus stingy slot CB Logan Ryan. Scoreless since Week 1 with 53 yards or fewer in three of his last four, Westbrook has settled in as a low-ceiling WR4. … The Jags placed rookie TE Oliver (back) on I.R. Monday, reducing their tight end depth chart to blocker Koyack, oft-banged-up receiving TE Seth DeValve (oblique), and street free agent signing Nick O’Leary, he of infamous 29-inch T-Rex arms.

Mike Vrabel’s Titans provided a perfect template of how they want to play in Week 10’s upset of Kansas City, burying the Chiefs on 26/225/2 (8.7 YPC) rushing while Ryan Tannehill averaged 9.5 yards on just 19 pass attempts. Derrick Henry gets another chance to carry Tennessee’s offense against a leaky Jags defensive front that’s permitted 209/1,130/8 (5.41 YPC) rushing to enemy backs and got eviscerated by the Colts for 264 rushing yards and three rushing TDs last week. In Henry’s career, his 3.9 yards per carry in September and October spike to 5.34 in November and December, while Henry has scored twenty-two touchdowns in the latter months compared to 10 in the former. With 16-plus touches in 10-of-10 weeks, Henry’s workload is as secure as any back’s in football. It can’t hurt that Henry has eight TDs and has averaged 97.4 total yards in seven career meetings with the Jags. … A top-12 fantasy passer in four straight games, Tannehill’s streak is in jeopardy against the Jags, who rank No. 4 in sack rate (9%) and No. 1 in QB Hit Rate (19.7%), while Tannehill’s passer rating dives from 119.6 when kept clean to 46.0 under duress. A severe run-funnel defense, Jacksonville has surrendered only 14 touchdown passes in 10 games, while just three of the last nine quarterbacks to face the Jaguars have top-16 fantasy scores.

Tannehill’s 2019 target distribution: A.J. Brown 24; Corey Davis and Jonnu Smith 22; Adam Humphries 19; Anthony Firkser 12; Tajae Sharpe 11; Dion Lewis 9; Henry 7; Kalif Raymond 4; Delanie Walker 2. … Brown failed in Tennessee’s pre-bye Week 10 win over K.C. (1/17/0), but the Titans’ run-first offense was largely to blame. Tannehill passed just 19 times with 13 completions in a Henry-dominated game. Despite immense talent, Brown simply can’t be trusted above WR4/flex range, especially in a run-funnel environment like this. Brown did pop as this week’s No. 5 buy-low player in Josh Hermsmeyer’s Air Yards Model and would be my favorite DFS-tournament play in Tennessee’s Week 12 pass-catcher corps. … Davis (hip) missed Week 10 after logging stat lines of 4/48/0 > 2/9/0 > 6/80/1 in Tannehill’s initial three starts. Jacksonville has permitted the NFL’s 11th-fewest wide receiver fantasy points per game, while Davis has just six career TDs and over 50 yards in 10-of-36 games (28%). … Only playing 54% of Tennessee’s offensive snaps, Humphries has topped 65 yards in 1-of-10 games. … Walker told reporters he intends to return from his ankle injury coming off the Titans’ bye. While Smith has passed him as Tennessee’s main tight end, Walker’s availability will likely cut into Smith’s route-running opportunity. Ultimately, every member of this passing game is a tough Week 12 sell.