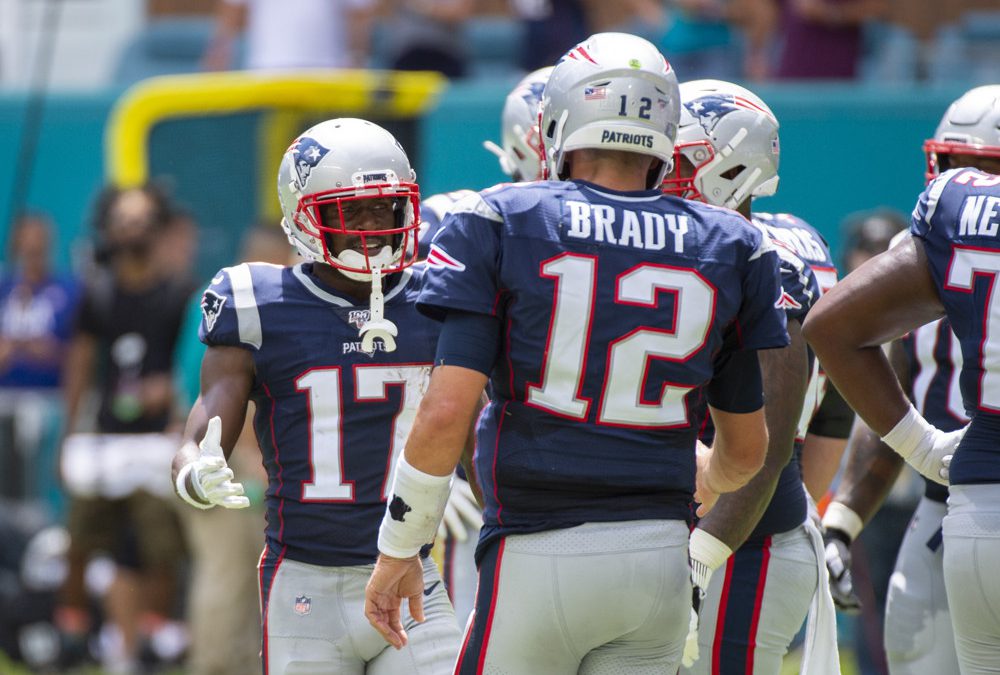 The Luke Falk-quarterbacked Jets’ 10.5-point team total tells you all you need to know about the near-term prospects of this offense. Fire up the white-hot Patriots’ D/ST. … With noodle-armed Falk under center and Stephon Gilmore eliminating Robby Anderson, slot man Jamison Crowder looks like the Jets’ only remotely playable pass catcher for PPR-specific fantasy leaguers willing to bank on a flurry of checkdowns in comeback mode. … Le’Veon Bell should also pay PPR dividends on volume alone, even if his touchdown outlook is poor. Bell led the Jets in Week 2 targets from Falk, finishing with a team-high ten. New England has allowed the NFL’s tenth-most running back catches (12) two games in. … From a longer-term-thinking standpoint, I’d just like to note that the season isn’t over yet for Jets skill-position players. You’re going to have to exercise some patience, but Sam Darnold (mononucleosis) sounds confident about a Week 5 comeback, and Chris Herndon is due back in Week 6. The Jets’ schedule also lightens up considerably in the second half of the season after a brutal start. I’m still stashing Herndon and Ty Montgomery in all deep-bench leagues. Le’Veon is running into 25-30 car crashes per game, already needed an MRI on his shoulder, and averaged nearly four missed games per season with the Steelers. And there is nowhere for the trajectory of this offense to go but up once Darnold returns.

Week 1’s fantasy QB7 and Week 2’s QB5, Tom Brady should continue his roaring start with a monster Week 3 team total in a game where New England is likely to impose its offensive will. The Jets’ pass defense is in such bad condition that they already benched high-priced CB Trumaine Johnson and pulled stud SS Jamal Adams out of last week’s blowout loss to Cleveland, while neither OLB Jordan Jenkins (calf) nor ILB C.J. Mosley (groin) appears likely to play in Foxboro. There’s really no need to overthink this; Brady should light up all-talk, no-walk Jets DC Gregg Williams’ unit. … Historically a pass-funnel defense, the Jets have struggled to stop the run early this year, conceding a combined 35/160/1 (4.57 YPC) rushing line to Bills and Browns backs. Capitalizing on positive game script in last week’s massacre at Miami, Sony Michel rebounded from his Week 1 dud for a 21/83/1 performance and should see similar usage here. Already second in the NFL in red-zone carries (8), Michel is a multi-touchdown candidate in a game the Patriots won’t struggle to control. … James White’s touch counts are just 9 and 6 two games in, rendering him bench fodder until the Patriots catch a competitive opponent. (Traveling to Buffalo may provide that next week.) … Rex Burkhead’s touch counts are 13 and 7. He’s a better real-life than fantasy player at the moment. … Rookie Damien Harris was a healthy scratch in Weeks 1 and 2.

Brady’s Weeks 1-2 target distribution: Julian Edelman 15; White 11; Burkhead 10; Josh Gordon 9; Antonio Brown 8; Phillip Dorsett 7; Matt LaCosse and Ryan Izzo 2; Jakobi Meyers 1. … Brown’s debut wasn’t to blame for Edelman’s Week 2 dud (4/51/0), which had more to do with Brady needing only 28 attempts to down the lowly Fins. Similar game script is likely here, but Edelman should only be slightly downgraded as Brady’s most-trusted target in a cupcake draw with a very high likelihood of passing-game efficiency. Edelman still leads the Pats in targets, catches (10), and Air Yards (117). … The Dolphins stuck top CB Xavien Howard on Gordon in Week 2, so Brady picked them apart with everyone else. Not a single Jets cornerback could hold Howard’s jock. Variance should be expected from Gordon in a stacked wideout corps, but he’s got WR1 upside every week with immense individual talent playing 79% of New England’s offensive snaps. The Jets have been clocked by fellow perimeter WRs Odell Beckham (6/161/1) and John Brown (7/123/1). … The Patriots did go out of their way to feed Brown early in last week’s win over the Fins; he piled up three catches for 36 yards on their opening drive, drew a holding flag in the end zone to set up Michel’s one-yard TD, received a first-quarter jet sweep, and beat helpless CB Jomal Wiltz for a 20-yard back-shoulder touchdown catch. Brown drew a team-high eight targets despite playing only 25-of-70 snaps (36%) and should rise above 50% in Week 3, pushing Dorsett down.