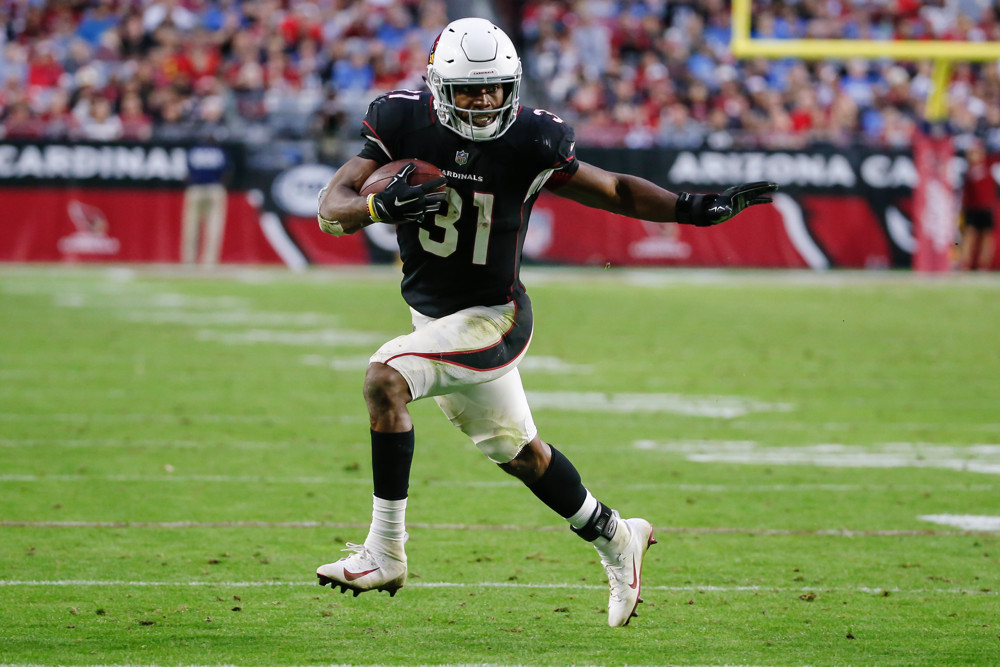 Although Kerryon Johnson’s preseason frustrated from the standpoint that he was frequently pulled in favor of C.J. Anderson and rookie Ty Johnson in passing situations – and the Lions claimed passing-game back J.D. McKissic off waivers at final cuts – Kerryon will draw no more-favorable matchup all year than the Cardinals, whose run-defense personnel has worsened after ranking bottom four in 2018 DVOA by losing DE Darius Philon (off field), ILB Haason Reddick (knee scope), OLB Markus Golden (Giants), and leading tackler SS Antoine Bethea (Giants). Lions coach Matt Patricia stubbornly stresses a high-volume rushing attack, and Arizona is an opponent against which Detroit should be able to successfully impose its run-based will. … Although matchup also works in Matthew Stafford’s favor – from top to bottom, the Cardinals’ on-paper defense is worst in the league – Patricia and decidedly run-first new OC Darrell Bevell’s offensive philosophy doesn’t. Stafford’s 3,777 passing yards in his first season under Patricia were an eight-year low, while Bevell’s passing offenses have ranked in the top half of the league in just 3-of-12 years as an NFL coordinator. While Stafford should pass efficiently in this cupcake draw, Patricia and Bevell seem intent on doing whatever they can to cut the number of times Stafford actually throws.

The Cardinals will trot out rookie Byron Murphy and journeyman Tramaine Brock on his fifth NFL team as starting cornerbacks after losing LCB Patrick Peterson (suspension) and RCB Robert Alford (broken leg). Although target volume is a real concern for Kenny Golladay and Marvin Jones due to their team’s stone-age offensive approach and acquisitions of Danny Amendola and T.J. Hockenson, Golladay and Jones’ matchup-driven efficiency projections are lofty enough for the former to be teed up as an upside WR2 and the latter as a WR3/flex. … Amendola will likely do more damage to Golladay and Jones’ volume than carve out value himself, pulling 4-6 easy-completion targets per game away from Detroit’s higher-ceiling wideout threats. … Rookie tight ends notoriously struggle for fantasy-relevant production, and Jesse James presents an obstacle for Hockensen after landing a surprisingly-lucrative four-year, $24 million deal to block and collect occasional short-area targets from Stafford. An incredible college-to-pro prospect, Hockenson won the Mackey Award as a redshirt sophomore at Iowa and will inevitably make fantasy noise. I’m just not sure how soon. I’m viewing him as an upside TE2 with major streamer appeal.

Perhaps it’s too hedgy, but I’m approaching this as a wait-and-see week to gauge the efficacy of Arizona’s newfangled Kliff Kingsbury scheme. Due to their turnstile defense, I very much worry the Cardinals will get clocked in time of possession by a run-oriented Lions team that actively strives to accomplish just that. The lone Cardinals skill player I’d start with confidence is David Johnson, whose diverse skill set raises his floor even if the offense bombs. The Lions’ defense is no pushover, adding DE Trey Flowers, DT Mike Daniels, and slot CB Justin Coleman after DT Damon Harrison helped transform Detroit’s up-front stoutness midway through last year. … As for Kyler Murray, Larry Fitzgerald, Christian Kirk, Michael Crabtree, and KeeSean Johnson, it would be difficult to generate any evidence-backed takes beyond deeming the former three volatile DFS-tournament options. I want to see this offense play an actual game and perhaps two – the Cardinals visit Baltimore next week – before jumping on any specific player as a fantasy start. Fitzgerald was Arizona’s lone full-time wideout this preseason and looks like the safest bet. Kirk did average 2.7 more yards per target versus man coverage last season (Sports Info Solutions), and Patricia ran man at the league’s fifth-highest rate. Crabtree admitted he is nowhere near NFL game shape. Rookie WR Andy Isabella had a rough August, missing time with a knee injury and working with the twos and threes.