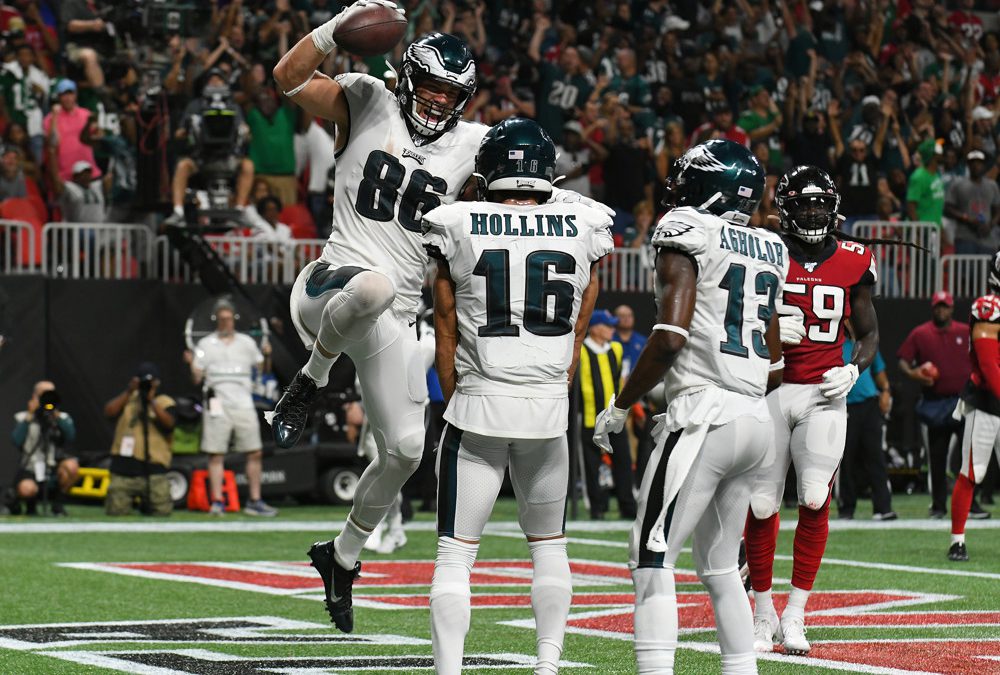 An assumption of rational coaching on behalf of the Lions in Week 3 would dictate OC Darrell Bevell and Matt Patricia scrapping their stone-age run-first mantra in favor of attacking Philadelphia’s bumbling pass defense. Eagles DC Jim Schwartz’s unit was cooked for Week 1’s QB6 result by journeyman Case Keenum and last week’s QB8 finish by Matt Ryan as both cleared 320 yards and threw three touchdown passes apiece. The Eagles are without two of their three biggest interior defensive line pieces in Malik Jackson (foot) and Timmy Jernigan (foot), and knee-hobbled top CB Ronald Darby is getting lit up. If the Lions play their cards right – and we’re dealing in assumptions here – Stafford-to-Kenny Golladay stacks should win folks some DFS money. … C.J. Anderson’s release enhances Kerryon Johnson’s outlook after the Lions wasted 25% of their Weeks 1-2 offensive snaps, 13 pass routes, and 16 carries on the oversized plodder. Dynamic rookie Ty Johnson is now Detroit’s clear No. 2 back and should be rostered in all 12-team leagues. Although Philly has defended the run stoutly early on, Jackson and Jernigan’s losses will be felt, and a potential increase of 3-5 touches per game would do wonders for Kerryon’s RB2 reliability.

Stafford’s Weeks 1-2 target distribution: Golladay 19; Danny Amendola 14; T.J. Hockenson 12; Marvin Jones 10; Kerryon and Jesse James 5; Ty Johnson and J.D. McKissic 2. … This is a true eruption spot for Golladay after he took Chargers All-Pro CB Casey Hayward to task on last week’s game-winning 31-yard touchdown catch. Per Sports Info Solutions, Philadelphia has allowed league highs in catches (19), yards (327), and touchdowns (4) to perimeter receivers, while Golladay has lined up outside on a team-high 70% of his snaps. The Lions have thrown 15 passes to outside receivers; Golladay has been the recipient of 12 of them (80%). Golladay also ranks fourth in the NFL in Air Yards. … As discussed in last week’s Matchups column, Amendola’s big Week 1 was a predictable, overtime-inflated fluke against Arizona, the fastest-paced team in the league. Amendola finished catch-less in Week 2 and lacks fantasy value beyond the deepest of PPR leagues. … Teams targeting tight ends against the Eagles have completed 10-of-15 targets (67%) for 105 yards and a touchdown. While we may have jumped the gun on Hockenson as an automatic TE1 following his big opener, this is a definite bounce-back spot in a game where the Lions should dial up more passes than usual. … Jones’ matchup is obviously appealing, but his usage remains concerning with the fourth-most targets and third-most Air Yards on a run-first Lions team.

Minus DeSean Jackson (groin), Alshon Jeffery (calf), and Dallas Goedert (calf), Carson Wentz will go to Week 3 battle with what amounts to a second-string pass-catcher corps. Wentz was also beat to hell himself in last Sunday night’s loss at Atlanta. As the Lions have yet to allow a top-12 fantasy quarterback week – they’ve faced Kyler Murray (QB13) and Philip Rivers (QB26) – I’d be quite willing to entertain streaming options over Wentz. … Although Miles Sanders continues to operate as the Eagles’ lead back, it’s fair to question their commitment to him with 53 yards on 21 carries (2.5 YPC) and 11 yards on six targets. OC Mike Groh noted Thursday that Sanders is bouncing too many inside runs to the outside, and he’s not finishing through final contact. Sanders ranks an abominable 44th among 47 qualified running backs in PFF’s Elusive Rating. Combine Sanders’ ineffectiveness and inability to fully separate from Jordan Howard with whispers of the Eagles pursing Melvin Gordon, and season-long leaguers may want to explore packaging Sanders with another player in exchange for a more-bankable RB2/flex.

Wentz’s Weeks 1-2 target distribution: Zach Ertz 23; Nelson Agholor 16; D-Jax 9; Mack Hollins 8; Jeffery 7; Sanders and Darren Sproles 6; Howard 4; J.J. Arcega-Whiteclaw 4; Goedert 3. … Quiet in Week 1, Ertz parlayed Philly’s Week 2 rash of wideout injuries into an otherworldly 16 targets while vaulting to the NFL lead in Air Yards among tight ends (181). Ertz’s eight red-zone targets through two games are nearly double those of the next tight end (Mark Andrews, 5). No tight end on the Week 3 slate has a higher opportunity projection than Ertz, putting him squarely in DFS crosshairs. … Agholor dropped last week’s potential game-winning TD but did capitalize on Jackson and Jeffery’s injuries for 8/107/1 receiving on 11 targets. Agholor runs 82% of his routes in the slot, where Larry Fitzgerald (8/113/1) and Keenan Allen (8/98/0) have eaten against the Lions. Agholor will be an upside WR3 play until D-Jax and Alshon return. … Plus sized (6’4/221) and fast enough (4.53), Hollins replaced Jackson as the Eagles’ Week 2 deep threat and logged 5/50/0 receiving on eight targets. Cheaply priced and popping as this week’s No. 4 buy-low receiver in Josh Hermsmeyer’s Air Yards Model, Hollins is a tempting DFS-tournament play in this spot. … Whereas Hollins is the direct backup to D-Jax, Arcega-Whiteside backs up Jeffery and played 93% of Philly’s Week 2 offensive snaps. The second-round pick stunk up the joint with four yards on four targets but was the best contested-catch receiver in 2018 college football and won’t lack Week 3 opportunity.