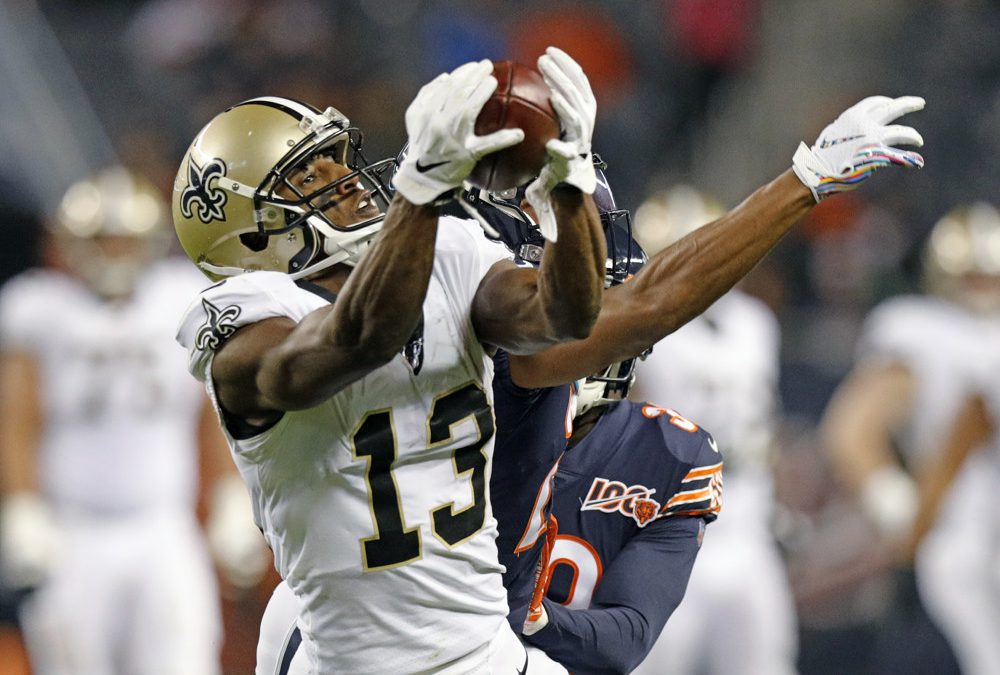 Christian McCaffrey overcame Kyle Allen’s four-pick, five-sack implosion in last week’s blowout loss to Atlanta for his eighth game above 140 total yards in ten tries to remain fantasy’s No. 1 overall PPR back by a very-nice 6.9 points-per-game margin over Dalvin Cook. McCaffrey encounters one of his toughest matchups of the season at New Orleans – DC Dennis Allen’s defense has bottled up enemy backs for 3.67 yards per carry, five TDs in ten games, and the NFL’s fourth-fewest receiving yards (300) – but McCaffrey is the league’s most matchup-proof player with an ability to compensate for any rushing unproductivity with elite passing-game usage. CMC is on pace for a 94.4/827.2/4.8 receiving line, which would make him this year’s PPR WR22 if you ignore his rushing production. … Having gone seven straight starts without a fantasy result above QB15, Allen finds himself in no place to right the ship on the road facing a Saints defense that held six of its last seven quarterbacks faced to outcomes of QB14 or worse. Allen’s Week 11 play was beyond atrocious, “seeing ghosts” by anticipating pressure that wasn’t there and throwing three of his four interceptions in scoring position. Top ten in the NFL in QB hits (66), the Saints can keep Allen uncomfortable with a combination of pass rush and crowd noise in the amped-up Superdome. New Orleans’ D/ST is a better straight-up play than Allen in Week 12.

Allen’s 2019 target distribution: D.J. Moore 70; Curtis Samuel 58; CMC 56; Greg Olsen 43; Jarius Wright 26; Reggie Bonnafon 7. … Especially with Marshon Lattimore (hamstring) looking likely to miss another game, Moore shouldn’t struggle to pay fantasy dividends even if his quarterback underwhelms. Moore is averaging 10.5 targets over his last six games and cleared 70 yards in five of them. He’s an easy every-week WR2. … Samuel’s touchdown reliance is far more pronounced with 53 yards or fewer in 7-of-10 games but five end-zone trips to Moore’s one. Although Samuel has drawn more 2019 Air Yards than Moore, Moore’s significant target advantage on higher-percentage routes places him firmly ahead of Samuel on weak-armed Allen’s pecking order. Samuel is a dice-roll WR3. … Athletic at linebacker and talented at safety, the Saints never present a favorable matchup for tight ends. That leaves Olsen as a purely usage-based TE1 play with a league-high 158 routes run and the NFL’s fourth-most Air Yards (197) among tight ends since Carolina’s Week 7 bye. I’m starting Olsen with confidence wherever I have him.

Even as Carolina typically presents tough quarterback matchups by ranking No. 1 in sacks (39) and No. 3 in QB hits (73), the Saints are an offense to continue betting on with their skill-player cast at full strength behind a butt-kicking offensive line. In last week’s Falcons upset of the Panthers, Matt Ryan exposed leaks in Carolina’s backend on a year-high ten yards per pass attempt. Drew Brees is a solid season-long QB1 play with just enough upside for DFS-stack consideration accompanied by Alvin Kamara and/or white-hot Michael Thomas. In his four 2019 games played start to finish, Brees’ fantasy outcomes are QB12 > QB4 > QB22 > QB10. … Even as Latavius Murray siphoned 12 touches on 40% of last week’s snaps, Kamara maintained high-end PPR RB1 usage and results with 122 yards on 23 touches, including ten catches at the Bucs. Murray’s participation isn’t so much a question of whether Kamara takes a hit as it is of Murray’s own flex viability. With 18-plus touches in five of his last six games facing a Panthers defense enemy backs have throttled for 18 TDs and 4.81 yards per carry, Kamara offers Week 12 eruption potential. … Murray’s stock does feel tenuous after consecutive box-score flops, but his Week 11 opportunity was strong enough to stay in the flex-play conversation, and Murray could come in especially handy in clock-killing mode with the Saints favored by two scores at home over the Panthers.

Brees’ 2019 target distribution: Thomas 50; Kamara 28; Murray 20; Jared Cook and Ted Ginn 17; Taysom Hill 8; Tre’Quan Smith 6. … Even with Panthers top CB James Bradberry playing at shutdown levels, Thomas’ constant movement around the formation should render Bradberry largely irrelevant as it pertains to Thomas’ Week 12 box score. Thomas has made 32 of his catches in the slot this year; Bradberry plays less than 1% of his snaps inside. Among seemingly everything else, Thomas leads the NFL in target share versus zone coverage (31.5%), while Carolina runs zone at the NFL’s second-highest rate (82%). … Back in every-week TE1 good graces, Cook enters Week 12 with 70-plus yards and/or a touchdown in four straight games. The Panthers haven’t given up big tight end production, but Cook’s stable role in an efficient passing attack should keep him stapled into fantasy lineups. … Ginn and Smith are low-floor, big-play-reliant WR4 dart throws with a lean toward Ginn this week. This is a revenge game for the ex-Panther, who ran 27 routes compared to Smith’s 25 in last week’s win over Tampa Bay.