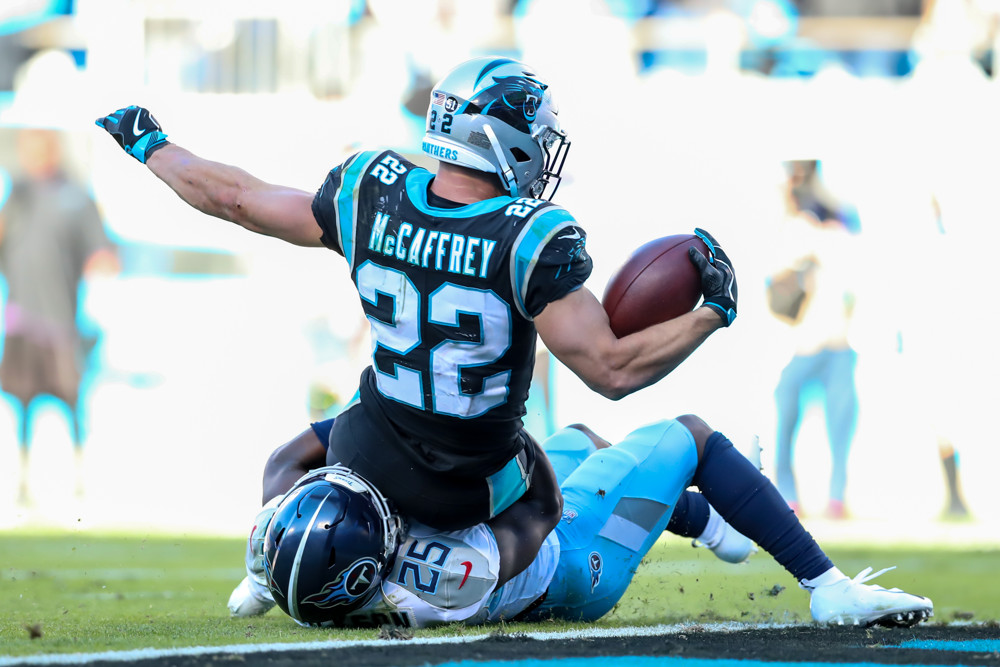 After extending his lead to 7.6 points per game over PPR runner-up Dalvin Cook, Christian McCaffrey catches another smash spot at Green Bay, which resurrected Melvin Gordon’s season in Week 9 and on the year has been trounced for 212/1,036/10 (4.89 YPC) rushing and the NFL’s seventh-most receptions (53) by enemy backs. McCaffrey leads the league in rushing yards per game (110.1), touchdowns (13), and yards from scrimmage (1,244) despite a first-half bye. As usual, he’s the No. 1 play in all of fantasy. … Kyle Allen’s win-loss success has not translated to the box score with fantasy results of QB31 > QB15 > QB20 > QB27 > QB17 over his last five starts. Even as Green Bay’s pass defense has been exposed as fraudulent – only six teams are allowing more yards per attempt (8.1), and DC Mike Pettine’s unit has dipped to 19th in sack rate (6.7%) and 15th in QB Hit Rate (15.3%) after a fiery start – Allen’s game-manager role limits his fantasy appeal to two-quarterback-leagues and desperate streamer scenarios.

Allen’s 2019 target distribution: D.J. Moore 44; Curtis Samuel 43; CMC 35; Greg Olsen 27; Jarius Wright 22; Reggie Bonnafon 4. … I’m slightly favoring Samuel over Moore this week; Samuel has seen 55 more Air Yards since Carolina’s Week 7 bye, while Moore is likelier to draw Packers top CB Jaire Alexander as the Panthers’ more perimeter-oriented receiver. Both remain quality WR2s against an overrated Packers secondary that’s yielded the NFL’s sixth-most 20-plus-yard catches (35) and a league-high 11 pass plays of 40-plus yards. Moore and Samuel are also both popping as top-three buy-low players in Josh Hermsmeyer’s Week 10 Air Yards Model. … Packers opponents are 49-of-69 passing (71%) for 530 yards (7.7 YPA) and five TDs when targeting tight ends; only Arizona, Tampa Bay, Oakland, and Seattle have allowed more fantasy points per game to Olsen’s position. Even as Olsen’s production has been uneven lately, he ranks No. 5 among tight ends in pass routes run since the bye week and is low-end TE1 playable in this plus draw.

The Packers return from an ugly road loss to the Chargers for a likely bounce-back spot versus Carolina, whose consistent defensive weakness has come versus the run. Although Matt LaFleur reinforced his RBBC devotion by allocating nine Week 9 touches to Aaron Jones and eight to Jamaal Williams – the Packers ran only 49 offensive plays to Los Angeles’ 68 – Jones out-snapped Williams 60% to 44%, and they both ran exactly 20 routes. Ultimately, each is capable of useful Week 10 fantasy production as home favorites against a Carolina front that’s been drilled for 172/844/11 (4.91 YPC) rushing and 14 all-purpose TDs in eight games by enemy backs. Jones is a legit RB1 and Williams an upside flex play with five touchdowns in his last four games. Jones had 35 targets in 12 games last season; through nine this year, he already has 46. … Previously one of football’s hottest quarterbacks, Aaron Rodgers played his season-worst game in L.A., repeatedly bouncing throws at his receivers’ feet and missing high down the seams. The Panthers do not offer a friendly matchup, having held 6-of-8 quarterbacks to fantasy results of QB15 or worse while leading the NFL in sacks (34) and ranking top five in QB hits (59). Yet Rodgers has been far better at home than on the road this year with a 12:2 TD-to-INT ratio and 8.5 yards per attempt at Lambeau compared to only five touchdowns and a not-so-nice 6.9 YPA in four away games. Rodgers is a fade-matchup QB1 whose outlook will improve if Panthers top CB James Bradberry (groin) can’t play.

Rodgers’ Week 9 target distribution: Davante Adams 11; Williams 6; Jones, Allen Lazard, and Jimmy Graham 4; Marquez Valdes-Scantling, Geronimo Allison, and Jake Kumerow 2. … Although he managed 41 scoreless yards, Adams (toe) looked all the way back with a team-high 111 Air Yards on 84% of the snaps in Los Angeles. Even more than Rodgers, Adams’ matchup will improve significantly if Bradberry can’t go. On the season, Adams is averaging a lofty 9.4 targets per game. Rodgers-to-Adams stacks are a contrarian DFS-tournament idea, especially since Adams popped as Week 10’s No. 4 player in Josh Hermsmeyer’s Air Yards Model. Per Sports Info Solutions, Adams’ 2018-2019 catch rate jumps from 53% against man to 76% against zone coverage with a full-yard spike in yards per target going from man to zone. Carolina runs zone coverage at an NFL-high 85% clip. … The rest of Green Bay’s wideout corps was a predictable mess in Adams’ Week 9 return. Here’s how routes were distributed: Adams 34; MVS 27; Allison 23; Lazard 20; Kumerow 10. This is now officially a five-man WRBC. … Lazard is the one WR4/flex dart I’d be willing to throw behind Adams; Lazard ran 85% of his Week 9 routes inside, where fellow slot WRs Chris Godwin (10/151/0, 8/121/1), Dede Westbrook (7/82/0), Adam Humphries (4/65/0), Christian Kirk (10/59/0), Cooper Kupp (7/46/0), Larry Fitzgerald (5/36/1), and Emmanuel Sanders (4/25/1) have turned in useful or better PPR production against Carolina’s slot coverage. … Graham has finished with 30 yards or fewer in 6-of-9 games and topped five targets in 1-of-9. He’s a low-floor, touchdown-or-bust TE2 each week.