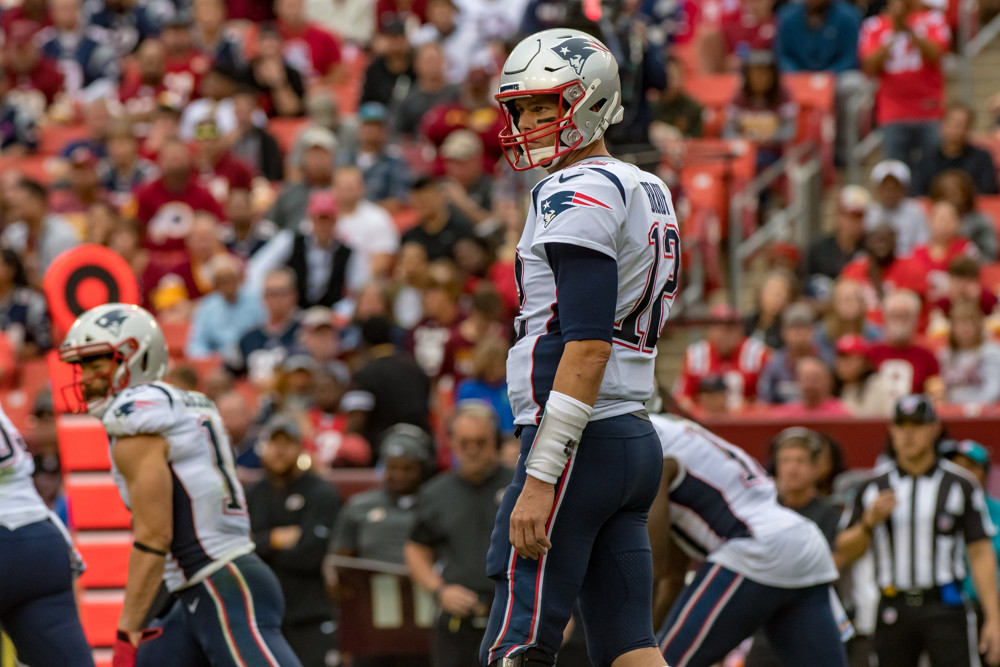 The banged-up Patriots stand to benefit from generous Weeks 6-to-7 rest, visiting the Jets on Monday night following last Thursday’s rout of the Giants. Although his on-field play has been shaky behind a patchwork line, Tom Brady visits The Meadowlands with top-14 fantasy results in 5-of-6 starts, including four top-seven finishes. Even amid game-tape ups and downs, I like Brady as a high-floor, high-ceiling start against the Jets. Brady’s outlook is enhanced by Sam Darnold’s return, giving this game much more high-scoring potential than had Gang Green sacrificed Luke Falk again. … Sony Michel was frustratingly vultured at the goal line three times against the G-Men – twice by Brady and once by Brandon Bolden – yet Michel’s usage was otherwise promising, establishing season highs in snaps (51%), carries (22), and touches (24) and drawing three targets for the second straight game. I’m not convinced Bolden and Brady’s goal-line scores were more than a blip; Michel leads the AFC in carries inside the ten (13), and his other usage metrics are trending up with 17-plus touches in four of the Patriots’ last five games. With New England installed as ten-point favorites, Michel is set up for another RB2-level workload and RB1 upside should his goal-line usage bounce back. … With Rex Burkhead (foot) still on the mend, James White logged double-digit touches for the second straight week against the Giants and has drawn nine-plus targets in three consecutive games. White’s Week 6 fantasy score would have been far stronger had he not lost a receiving touchdown on replay review. One way for the Patriots to counteract Jets DC Gregg Williams’ high-blitz frequency would be to dial up screens to White, who ranks fourth among NFL backs in receptions (31). Assuming Burkhead sits again, White will be a high-floor RB2/flex play in PPR leagues based on matchup and usage. White is also tied for the league lead in red-zone targets (9) yet has just one end-zone trip on the year, suggesting he is due for some positive-touchdown regression.

Brady’s 2019 target distribution: Julian Edelman 56; White 39; Josh Gordon 36; Phillip Dorsett 23; Burkhead 18; Jakobi Meyers and Ryan Izzo 9; Michel 7; Bolden and Matt LaCosse 6; Gunner Olszewski 3. … Edelman went to town on the Jets’ slot coverage in Week 3 (7/62/1), only to leave with a second-quarter chest injury. Now all systems go, Edelman is an easy WR1 start with injuries and talent shortages throughout the Patriots’ pass-catcher corps. … Gordon suffered a painful knee injury against the Giants that figures to sideline him in The Meadowlands. … Dorsett (hamstring) is due back after missing Week 6 to operate as New England’s primary outside receiver. Jets boundary CBs Trumaine Johnson and Darryl Roberts have combined to permit 42 completions on 59 targets (71%) for 472 yards (8.0 YPA) and three touchdowns, giving Dorsett sneaky Monday night breakout potential. He also happens to be popping in this week’s Buy Low Air Yards Model. … With Dorsett inactive and Gordon bowing out early in last week’s win over the Giants, Meyers ran the second-most routes among Patriots receivers (56) behind Edelman and figures to draw the Week 7 start should Gordon not play. Meyers has efficiently caught 8-of-10 targets for 120 yards on the season and went a perfect 4-of-4 for 54 against the G-Men, arguably earning more run even if Gordon were in. Meyers makes for an intriguing one-game DFS sleeper in this plus draw. If Gordon sits, rookie return man Olszewski would stand in as New England’s fourth receiver. … Tight ends are even more of a crapshoot with LaCosse (knee) back on the shelf and Ben Watson and Eric Tomlinson added to the depth chart. Izzo is playing a ton of snaps but has nine targets in six games.

While Sam Darnold’s Week 6 return excitingly resurrected Gang Green’s passing game versus Dallas, the Patriots pose a much tougher challenge in primetime with Jets LT Kelvin Beachum (ankle) in danger of sitting and LG Kelechi Osemele (shoulder) definitely out. New England leads the NFL in sack rate (10.6%) and QB Hit Rate (20.9%) and is allowing the fewest fantasy points to quarterbacks in the league. On the backend, the Patriots can lock down Jets passing-game difference-maker Robby Anderson with Stephon Gilmore, and Chris Herndon (hamstring) still isn’t back. After the public sees Adam Gase’s offense likely struggle on Monday night’s national stage, it will be time to buy low on Jets skill players. Their Weeks 9-16 schedule is cake (@ MIA, vs. NYG, @ WAS, vs. OAK, @ CIN, vs. MIA, @ BAL, vs. PIT). … Positive game script actually worked against Le’Veon Bell in last week’s upset win; he still played 80% of New York’s offensive snaps but drew a season-low one target as the Jets nursed their lead and ran only 54 plays to Dallas’ 75. As Gang Green is a ten-point dog on Monday night, Bell should revert to negative script in a game where his box-score production figures to strongly hinge on the passing game. The Patriots lead the NFL in tackle-for-loss rate (34.9%) and have limited enemy backs to 93/320/0 (3.44 YPC) rushing.

Darnold’s 2019 target distribution: Jamison Crowder 26; Robby Anderson 15; Le’Veon 10; Ryan Griffin 7; Demaryius Thomas 4; Ty Montgomery 3. … Crowder’s target counts are 17 and 9 in Darnold’s two starts, and he is popping in Josh Hermsmeyer’s Week 7 Air Yards Buy Low Model. Especially in PPR leagues, Crowder should be teed up as a confident WR3 play. Bill Belichick would undoubtedly love to take Anderson and Le’Veon away in exchange for forcing Darnold to pepper Crowder with innocuous checkdowns underneath. … Anderson’s receiving lines in last year’s two Gilmore meetings were 2/22/0 and 3/24/0. This year, Gilmore has permitted 266 scoreless yards on 42 targets (6.3 YPA). Anderson is a low-floor WR3 Hail Mary play in this matchup but should have an immediate buy-low window after this. … Thomas is playable on one-game DFS slates in something of a revenge game for him; the Patriots cut Demaryius, re-signed him, then traded him to the Jets before the season. … Griffin has played 91% of Gang Green’s offensive snaps in Herndon’s absence. He’s a touchdown-or-bust one-game DFS option.