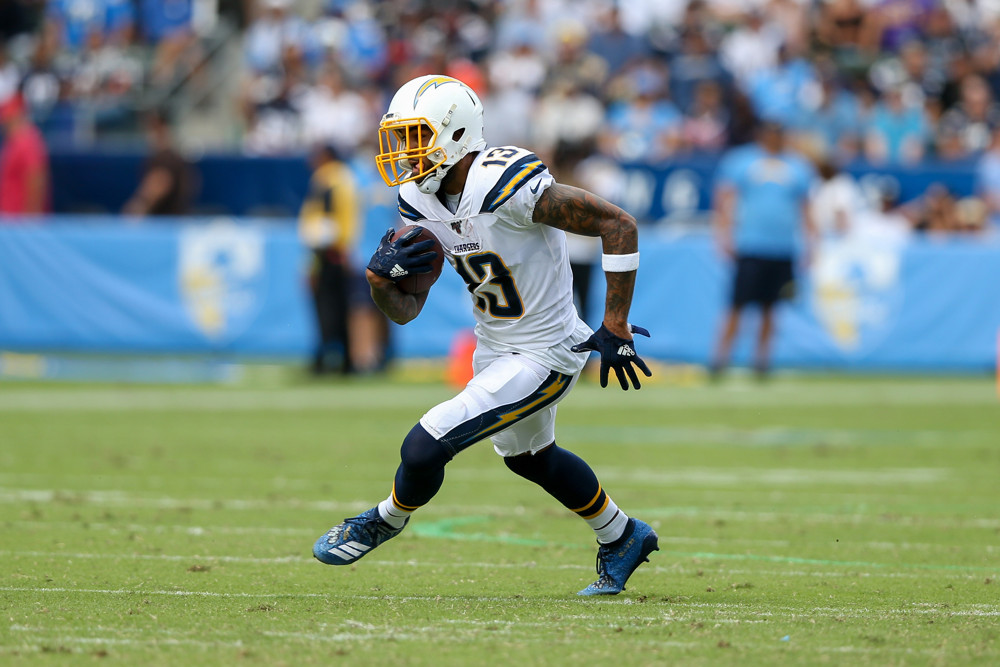 Losers of four straight by an embarrassing per-game margin of nearly 22, the Raiders visit the Chargers fielding an offense that has almost entirely lost its ability to score with a 13.2-point average over the last five weeks. Only 1-of-14 quarterbacks to face the Bolts have exceeded QB12 fantasy results, while Derek Carr has reached that threshold just three times all year. Carr is always a low-upside two-quarterback-league play in a weak passing attack. … With Josh Jacobs (shoulder) sidelined for Week 16 and probably Week 17, too, we can draw on Jacobs’ missed Week 14 game as a backfield blueprint over the final two weeks. DeAndre Washington assumed most of Jacobs’ role with more passing-game activity against the Titans, parlaying 20 touches into 106 yards and a touchdown on 63% of Oakland’s offensive snaps and running 22 pass routes. Jalen Richard was the Raiders’ clear No. 2 back with nine touches, a 39% playing-time clip, and 14 routes run. Sunday’s matchup is unimposing; the Chargers have yielded the NFL’s 12th-most running back catches per game (5.6) and 15 all-purpose touchdowns to enemy backs in 14 games. Washington is an upside RB2/flex play, while Richard is a riskier PPR-specific flex option.

Carr’s Weeks 13-15 target distribution: Darren Waller 25; DeAndre Washington 13; Tyrell Williams 11; Jalen Richard 8; Keelan Doss 6; Alec Ingold 5; Derek Carrier 4; Rico Gafford 1. … The continued focal point of Oakland’s passing game with Foster Moreau (knee) out for the year and Williams debilitated by plantar fasciitis, Waller is Oakland’s lone confident fantasy pass-catcher play against the Bolts. With that said, Hunter Renfrow’s return combined with Waller’s slow Week 10 versus L.A. (3/40/0) are cause for some concern regarding his ceiling. Only six teams have allowed fewer receptions than the Chargers (54) to tight ends this year. … Out since Week 12 with a punctured lung and broken rib, Renfrow is likely to do more to cut into his teammates’ passing-game production than carve out a big Weeks 16-17 finish himself. … Coach Jon Gruden acknowledged this week that Williams continues to struggle with lingering effects of his early-season foot injury. He’s cleared 50 yards once over the Raiders’ last six games and is averaging 4.3 targets since Week 8. The Chargers allow the NFL’s second-fewest fantasy points to wide receivers. Even in a “revenge” game, Williams is difficult to value as more than a low-floor WR4 option.

Quite possibly playing his final two games in a Chargers uniform, contract-year QB Philip Rivers will try to overcome his late-career rag arm in a near-optimal spot to do so against Oakland’s hapless defense, which has permitted top-12 fantasy outcomes to seven of its last nine quarterbacks faced, allowed the NFL’s third-most touchdown passes (32), and coughed up a league-high 8.5 yards per attempt. While Rivers’ matchup nears perfection, his own performance does not. He managed fantasy’s QB19 finish when these clubs met in Week 10, and Rivers has one result better than QB18 in his last seven starts. He simply hasn’t shown enough upside this year for serious DFS consideration. … Benched for losing two fumbles in last week’s blowout loss to the Vikings, Melvin Gordon enters Week 16 no-man’s land in some danger of continuing to lose work to Justin Jackson and always a committee partner at best with Austin Ekeler. While those risks do give Gordon some contrarian DFS appeal, they also drop him into RB2/flex range as a season-long start. Gordon’s upside remains intact in a game where the Chargers’ offense as a whole should play well, creating scoring chances. … Ekeler’s role is much more stable and his results more consistent with 80-plus total yards and/or a touchdown in 13-of-14 games. Somewhat stout on the ground, the Raiders’ defense can be exploited by pass-catching backs, having allowed the NFL’s seventh-most receiving yards to Ekeler’s position this year (682). He’s an every-week RB2 play.

Rivers’ target distribution under OC Shane Steichen: Keenan Allen 49; Ekeler and Hunter Henry 35; Mike Williams 31; Gordon 25; Andre Patton 6; Jalen Guyton 2. … For reasons alluded to above, every frontline Chargers pass catcher gets a favorable matchup here. Allen has rediscovered consistency with 80-plus total yards and/or a touchdown in five straight games, while Oakland’s secondary has yielded the NFL’s seventh-most fantasy points to wideouts. … Positive-TD regression is finally hitting Williams with end-zone trips in consecutive weeks, and he is averaging 82.2 yards over the Bolts’ last six games. The late-season improvement moves Williams into WR2/3 range. For Week 16 in particular, it helps that Williams leads L.A. in targets (25), catches (11), and yards (445) on 20-plus-yard downfield throws, because the Raiders have allowed league highs in 20-plus-yard downfield completions (32) and yards gained on 20-plus-yard downfield attempts (1,127), per Sports Info Solutions. … Henry’s target totals have ticked down (3 > 4 > 2) over the past three weeks while Allen and Williams’ have ticked up. Henry remains hard to fade against the Raiders, who allow the NFL’s second-most fantasy points to tight ends.