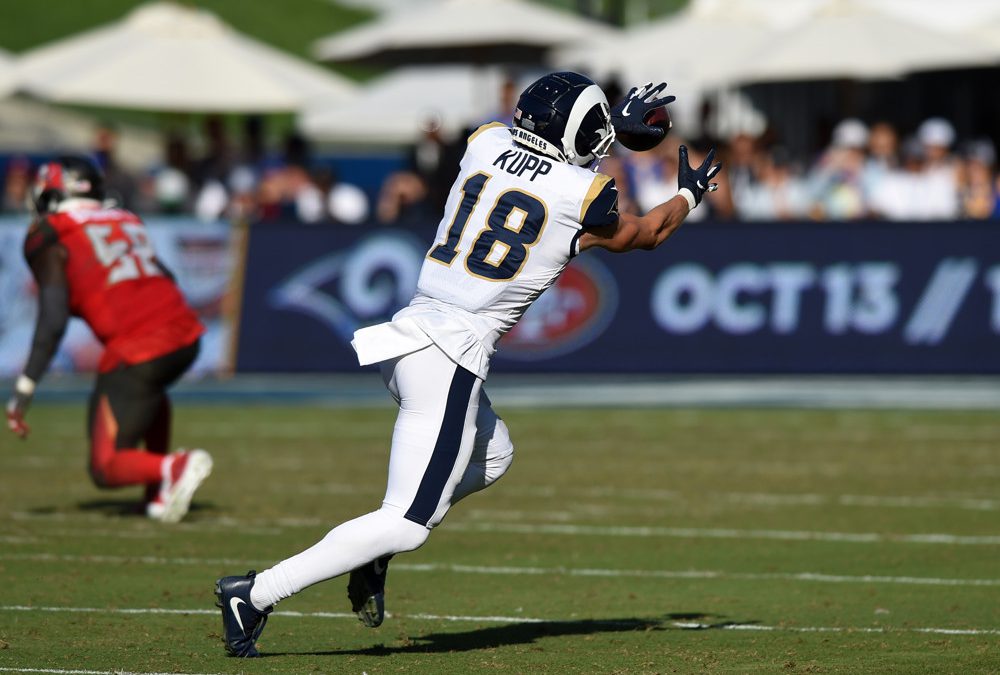 The Rams travel cross country for Sunday’s 1pm ET game after getting pummeled by San Francisco and reaching desperation mode following three straight losses. Jared Goff has fallen into an extended funk, completing just 59.8% of his passes at 6.7 yards per attempt with a 14:15 TD-to-INT ratio over his last 14 starts after averaging 8.7 YPA on 66% completions with a 33:7 TD-to-INT ratio in the previous 14. Still, this sets up a get-right game for a Rams offense whose primary deficiency is pass protection, allowing Goff to face pressure at the NFL’s third-highest rate (43.3%). Dan Quinn’s Falcons simply don’t generate pressure, ranking dead last in sack rate (2.5%) and 26thin QB Hit Rate (11.7%). As I’ll expand on shortly, Goff is a fade-recency-bias DFS-tournament play in stacks with Cooper Kupp. … The Rams are apparently pushing Todd Gurley (quad, knee) to return for an unknown role against the Falcons. The last time we saw him, Gurley played a season-high 93% of Week 5’s offensive snaps in a Thursday night game, then couldn’t make it back on a long week. Malcom Brown missed early-week practices with an ankle injury, and Darrell Henderson flashed more explosiveness than any Rams back has all season in last Sunday’s defeat, parlaying seven touches into 49 yards against the Niners. Henderson played only 33% of the snaps and lost a fumble (charged to Goff) on a third-quarter pitch play, however. I’m not expecting to have tangible answers on this backfield’s Week 7 usage distribution until Sunday morning at soonest.

Goff’s 2019 target distribution: Kupp 69; Robert Woods 51; Brandin Cooks 37; Gerald Everett 31; Gurley 22; Tyler Higbee 21; Josh Reynolds 9; Brown 3; Henderson 2. … This is a blowup spot for Kupp; Atlanta has hemorrhaged the NFL’s third-most receptions (72), fourth-most yards (887), and a league-high nine touchdowns in the slot since the start of 2018 (Sports Info Solutions). Kupp has 12 more slot targets than any other receiver in the NFL. … The Falcons’ inability to rush the passer should trickle down positively to Woods and Cooks, whose longer route depths in comparison to Kupp’s have cost them production with Goff struggling for time to set and throw deep. Woods is scoreless in the passing game this year and has been held to 70 yards or fewer in 5-of-6 games. But Falcons top CB Desmond Trufant (toe) is out again, forcing Atlanta to start raw fourth-round rookie Kendall Sheffield opposite weekly whipping boy RCB Isaiah Oliver. All told, the Falcons have allowed the NFL’s sixth-most catches (83), fourth-most yards (1,182), and second-most touchdowns (10) to wide receivers. Consider Kupp a high-end WR1, Woods an upside WR2, and Cooks a bounce-back WR2/3. … Since losing SS Keanu Neal (Achilles’), enemy tight ends have caught 19-of-23 targets (83%) for 218 yards (9.5 YPA) and three touchdowns against Atlanta over its last four games. Even with Everett coming off a two-catch, nine-yard clunker in a matchup with San Francisco where literally every Rams skill-position player flopped, Everett drew five or more targets for the third straight game and remains low-end TE1 playable in this gorgeous setting.

Matt Ryan returns home from the desert with 300-plus passing yards in seven straight games and top-eight QB1 results in four of his last five starts, including consecutive top-two outcomes against Houston and Arizona. In what projects as one of Week 7’s highest-scoring affairs, a slowdown is unlikely versus a Rams defense that lost SS John Johnson (shoulder) and LCB Aqib Talib (ribs) to I.R., traded away RCB Marcus Peters, and is hands-and-knees praying Jalen Ramsey will be ready to shadow Julio Jones after practicing for just two days with his new team. New Rams No. 2 CB Troy Hillhas been torched for 30-of-46 passing (65.2%), 455 yards (9.9 YPA), and five touchdowns over the past two seasons. Ryan deserves to be a very popular DFS play. … Even if Devonta Freeman’s film doesn’t reveal the bursty jitterbug he once was, his consistent usage in a high-octane offense has rebooted Freeman into RB1 range with 16-plus touches in four straight weeks and three-plus receptions in 6-of-6 games. Freeman ranks top 12 among running backs in targets and top ten in catches, and he out-touched Ito Smith 22 to 3 on 72% of the snaps in last week’s shootout loss to Arizona. This also projects as an up-tempo, scoring-friendly affair; offenses facing the Rams are averaging the NFL’s sixth-most plays per game (66.7). Even if this week’s Freeman-Smith touch split is closer than last Sunday’s, Freeman’s season-long bankability has risen considerably, and he makes sense in DFS-tournament game stacks. Smith is a low-end flex option.

Ryan’s 2019 target distribution: Julio Jones 53; Austin Hooper 50; Mohamed Sanu 40; Calvin Ridley 38; Freeman 29; Smith 14. … Los Angeles’ best hope for containing Jones comes via Tuesday trade pickup Jalen Ramsey, who hasn’t played in a football game since September 19 and will have all of two Rams practices under his belt ahead of Sunday’s game. With so many changing secondary pieces as alluded to above, the Rams are at major risk of Week 7 coverage busts. As usual, Julio is a confidently elite WR1 play. … Season-long fantasy’s biggest steal at the tight end position, Hooper should stay hot against a Rams defense that has perfectly yielded 22 completions on 22 targets for 271 yards (12.3 YPA) and a touchdown to tight ends over the last three weeks. … Sanu is among Atlanta’s least-predictable box-score performers because he’s rarely high in Ryan’s progressions yet catches everythingand is capable of delivering whenever Ryan’s early reads are covered. He’s a fine WR3/flex option based on this game’s track-meet potential. Fellow slot WRs Chris Godwin (12/172/2), Tyler Lockett (4/51/1), and Dante Pettis (3/45/0) all logged at- or above-expectation numbers against the Rams over the last three weeks. … Even amid up-and-down usage, Ridley has saved himself with touchdowns in 4-of-6 games and is the likeliest candidate to draw aforementioned Troy Hill’s leaky coverage should Ramsey chase Julio around the field. While typically a boom-bust WR2/3, this is another week where Ridley sets up nicely to boom.