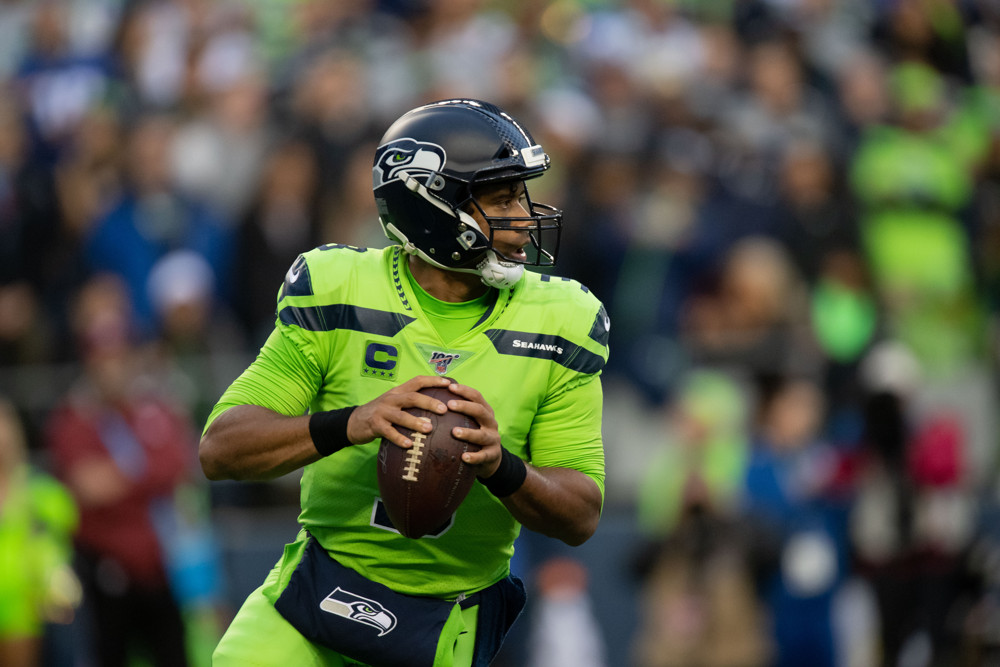 The Seahawks return from their Week 11 bye nursing an 8-2 record and capable of exploiting Philly’s pass-defense weaknesses via MVP co-favorite Russell Wilson and his upgraded three-receiver arsenal featuring Josh Gordon across from route dominator Tyler Lockett and rookie sensation D.K. Metcalf. Although Eagles DC Jim Schwartz’s unit has seemingly played better lately, its relative success came versus scattershot Josh Allen, lost cause Mitchell Trubisky, and a dead-looking Patriots offense all in a row. Still fantasy’s No. 2 overall QB1 behind Lamar Jackson, Wilson’s ceiling remains as lofty as any quarterback’s on the slate and is especially DFS appealing in Lockett stacks. … While Philadelphia’s run-game elimination is no secret, Schwartz’s defense is hemorrhaging 5.9 running back catches per game, keeping Chris Carson live as a PPR play. Accounting for nearly 70% of Seattle’s backfield targets and averaging 2.7 catches per game, Carson is a fringe RB1/2 despite this tough draw against the Eagles.

Tyler Lockett used Seattle’s bye to overcome his Week 10 shin-injury scare and should be all systems go at Philly. Lockett primarily aligns inside, where Eagles slot CB Avonte Maddox has been burned for completions on 30-of-45 targets (67%) for 372 yards (8.3 YPA) and a touchdown. Lockett long ago earned every-week WR1 treatment and should experience a volume spike in this pass-funnel draw. … D.K. Metcalf has shown rare consistency for a rookie, logging 50-plus yards and/or a touchdown in 9-of-10 games. Metcalf (6’3/228, 4.33) has a distinct size advantage on Eagles RCB Ronald Darby (5’10/193) and a massive speed edge over LCB Jalen Mills (4.61). Metcalf has developed into a trustworthy WR2/3. … Josh Gordon is a WR4/flex wild card after playing just 37% of Seattle’s pre-bye offensive snaps against the 49ers but making two clutch late-game catches that should theoretically earn him a greater moving-forward role. … Especially with Luke Willson (hamstring) banged up and Ed Dickson (knee) sent to I.R., Jacob Hollister should safely remain the Seahawks’ primary tight end. A possession and red-zone weapon in Seattle’s last two games, Hollister parlayed 16 targets into a 12/99/3 stat line on snap rates of 80% and 78%. Hollister has earned locked-in TE1 treatment playing the old Will Dissly role.

A home-game matchup with the Seahawks offers Carson Wentz slump-busting possibilities; six of the last seven quarterbacks to face Seattle banked top-12 fantasy scores, while Philadelphia should be able to overcome RT Lane Johnson’s (concussion) potential absence against a Seahawks defense that ranks 29th in sacks (20) and 31st in QB hits (41). Critical Seattle pass rushers Jadeveon Clowney (knee/hip) and DT Jarran Reed (ankle/groin) also missed most of the practice week. Held to fantasy results of QB18 or worse in four straight starts while directing the NFL’s slowest offense, Wentz’s floor remains low but his ceiling high with a clean pocket in what has a chance to be a back-and-forth affair. … Philly’s backfield outlook greatly hinges on Jordan Howard’s (shoulder) availability; he practiced on a limited basis this week but still needs medical clearance to play. In Howard’s Week 11 absence, the Patriots geared up to take Miles Sanders away, and Sanders’ box-score results flopped despite playing a career-high 85% of the Eagles’ offensive snaps. Boston Scott mixed in for seven carries without a target in Philly’s No. 2 back role. Newly signed Jay Ajayi did not play a down but probably will this week if Howard isn’t cleared.

This is a smash spot for both Eagles tight ends; only six defenses are allowing more fantasy points per game to Zach Ertz and Dallas Goedert’s position than Seattle. Per Sports Info Solutions, the Seahawks play zone coverage at the NFL’s fourth-highest rate, while Ertz has a dominant target share of 30.5% when the Eagles pass against zone looks. … In chronological order, these are Goedert’s snap rates in the Eagles’ last four games: 58% > 75% > 79% > 81%. Goedert ran a season-high 40 pass routes in last week’s loss to New England and has five-plus targets in four of Philly’s last five games. He’s a legitimate season-long TE1 with DFS appeal in this plus draw. … The Eagles’ wideout corps is a complete mess. Trying to gut out a high ankle sprain, Alshon Jeffery practiced in limited fashion this week. He’ll almost certainly be well short of 100% if he plays, and Jeffery hasn’t looked right all year. … Nelson Agholor missed early-week practice time with a knee injury. He’s topped 50 yards in 1-of-10 games. Both Jeffery and Agholor happen to be popping in Week 12’s Air Yards Buy Low Model, possibly giving them some hope. But expectations for both should be low based on health and to-date performance. … Here’s how Week 11 routes run were distributed among Eagles pass catchers: Agholor 47; Jordan Matthews 46; Ertz 43; Goedert 35; J.J. Arcega-Whiteside 11; Mack Hollins 5. … I like the idea of honing in on the Eagles’ tight ends and fading their wideouts, who have performed exceptionally poorly across the board all season.