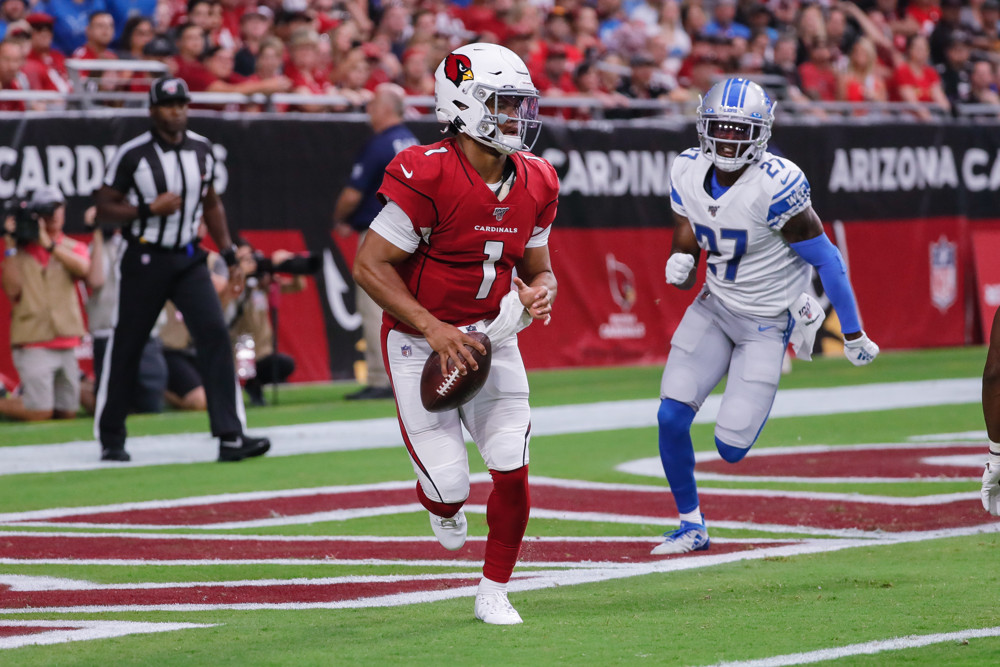 Winners of six of their last seven despite a 19.6-point average during that span and so much of it coming from defense, the Steelers nevertheless hobble into the desert with UDFA rookie Devlin Hodges under center and JuJu Smith Schuster (knee) and James Conner (shoulder) still on the shelf. Fourth-round pick Benny Snell has emerged as Pittsburgh’s main rusher on consecutive carry counts of 21 and 16, but only one target apiece in each game on 49% and 37% snap rates against the Bengals and Browns. Jaylen Samuels (55%) out-snapped Snell in last week’s win over Cleveland as Pittsburgh fell behind 10-0 early, emerging with nine touches for 54 yards. Snell is a touchdown-or-bust RB2/flex with a low floor based on his receiving nonexistence. Samuels remains involved on passing downs but seems to have fallen out of favor in the Steelers’ lead-back mix with Snell offering a more downhill, smashmouth running style that suits how Mike Tomlin wants to play in Pittsburgh’s current state. … Expectations should be raised for Hodges as a two-quarterback-league play; incredibly, 10-of-12 signal callers to face Arizona have banked top-ten fantasy results. Hodges’ pass-attempt totals are 20 and 21 in his two starts, however, and “Duck” has added nothing with his legs. Hodges’ ceiling just isn’t high enough for DFS deployment.

Hodges’ 2019 target distribution: Diontae Johnson 11; James Washington 9; JuJu and Conner 7; Vance McDonald 6; Samuels 5; Snell 2; Tevin Jones 1. … Hodges’ volume limitations pose by far the biggest obstacle for Pittsburgh’s pass catchers; there just isn’t enough opportunity to go around. … Johnson has been severely outproduced by Washington with Hodges quarterbacking. Despite commanding more targets, Johnson’s yardage total is 60 compared to Washington’s 203 with a pair of scores on Hodges’ throws. Washington is Duck’s hunting partner, which may explain the gargantuan disparity. On low-target projections, both are fringe WR3/flex options whose outlooks are boosted by facing an Arizona defense permitting the NFL’s most touchdown passes (31) and 20-plus-yard completions (60). If forced to guess, I’d say Washington is likelier to draw Patrick Peterson’s coverage than Johnson, heightening the latter’s DFS-tournament appeal. … McDonald hasn’t topped 40 yards all year but is as intriguing as ever this week; tight ends have pounded Arizona for the NFL’s most fantasy points, including Tyler Higbee’s Week 13 career game (7/107/1). McDonald has played at least 85% of Pittsburgh’s offensive snaps in four straight weeks. It would help Washington, Johnson, and McDonald if the Cardinals were able to score on Pittsburgh, forcing OC Randy Fichtner to increase his reliance on the passing game.

Kyler Murray comes off his season-worst game in Week 13’s blowout loss to the Rams for another worrisome draw. Just two of the last ten quarterbacks to face Pittsburgh topped QB14 fantasy results, while resurgent Steelers DC Keith Butler’s unit has the requisite horses to dismantle Arizona’s talent-deficient offensive line. Pittsburgh ranks third in the NFL in sacks (43) and tied for first in QB hits (90) and lives in enemy backfields, having tallied the league’s fourth-most tackles for loss (88). With few exceptions, this looks like a tough week to invest in Cardinals skill-position players. … On touch counts of 15 > 22 > 16 > 14 since joining the team, Kenyan Drake is Arizona’s lone fantasy-viable running back in this suboptimal matchup. The Cards returned from their Week 12 bye with David Johnson (6 touches, 23% snaps) playing deservedly sparingly and Chase Edmonds not playing at all. The Steelers have held enemy backs to 3.86 yards per carry, just 38.1 receiving yards per game, and five all-purpose TDs in 12 weeks. Even with Arizona’s backfield mostly to himself, Drake is a low-expectations RB2/flex option.