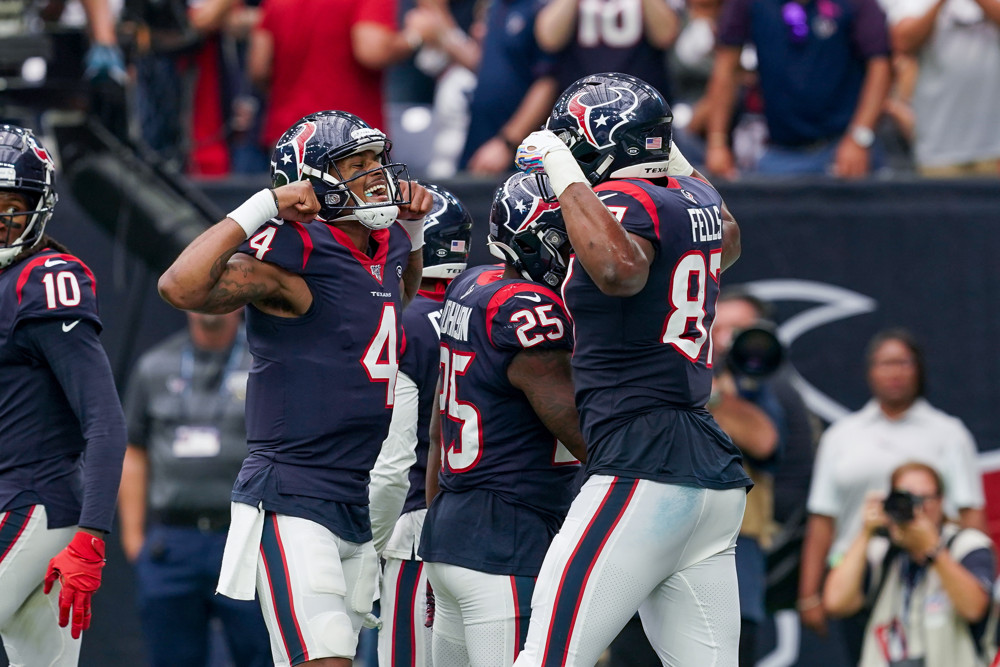 I waited as long as possible to do my Week 15 Texans writeup in hopes of gaining clarity on Will Fuller’s (hamstring) availability because of how much he moves the needle for his teammates, from Deshaun Watson on down. Unfortunately, that clarity was never gained, and Fuller seems headed for a dreaded game-time decision after going back on the shelf last week. Watson nevertheless reproved his every-week QB1 legitimacy with two rushing scores and Week 14’s overall QB4 result versus Denver, and on the season is now fantasy’s QB2 in points behind only Lamar Jackson. In one of this week’s highest-totaled games, Watson is an elite fantasy start in Nashville. But his ceiling for DFS-tournament purposes will heighten if Fuller plays. … The Texans went right back to a Carlos Hyde-paced backfield following Duke Johnson’s Week 13 spike; Hyde out-touched Johnson 16 to 7 and continues to be Bill O’Brien’s preferred lead-back play. Yet Hyde remains a weekly fantasy trap with atrocious PPR point totals of 6.7 > 14.0 > 8.3 > 3.5 > 10.4 > 9 > 9.5 > 3.2 > 9.8 in the nine games where he has not scored a touchdown, and the Titans excel at limiting rushing production by holding enemy backs to 3.97 yards per carry. Hyde is a low-floor flex option. Johnson has reached double-digit touches twice over Houston’s last eight games.

DeAndre Hopkins is an elite WR1 play at Tennessee regardless, but it’s notable he’s averaging nearly three more targets in games missed by Fuller. Already down RCB Malcolm Butler (wrist), the Titans look likely to be without LCB Adoree Jackson (foot), too, after trotting out Cardinals castoff Tramaine Brock and fifth-year retread Tye Smith as their starting perimeter corners last week. Hopkins has 80-plus yards and/or a touchdown in six of his last seven games. … After appearing in just one game since Week 7 once-doghoused slot WR Keke Coutee sprung to life for eight targets on 72% of last week’s offensive snaps and will be WR4 playable in deep PPR leagues against the Titans if Fuller can’t go. … There has been virtually no rhyme or reason to predicting Kenny Stills’ productive games, but it’s always at least a little bit concerning when a receiver (Stills, in this case) plays 96% of his team’s offensive snaps, his quarterback (Watson) drops back to pass 53 times, and said receiver draws two targets, gaining eight scoreless yards. That’s what happened against Denver. … Texans tight end snaps were distributed as follows in last week’s defeat: Jordan Akins 48, Darren Fells 42, Jordan Thomas 7. Houston spent the entire game in catchup mode, favoring catch-first Akins over superior blocker Fells. Sunday’s game projects to be closer. Held below 25 yards in five straight, Fells is still a touchdown-or-bust streamer.

Back home after boat racing the Raiders at their place, Ryan Tannehill catches a similarly inept Texans pass defense that wide-eyed rookie Drew Lock shredded for three touchdowns and 11.4 yards per pass attempt last week and has yielded top-12 fantasy finishes to 10-of-13 quarterbacks faced. Badly missing J.J. Watt (pec), Houston has fallen to 27th in the NFL in sacks (26) and 18th in QB Hit Rate (15.8%). Tannehill’s pass volume is an ongoing concern – he’s thrown fewer than 30 passes in 5-of-7 starts – but Tannehill can compensate with rushing value and projects to be especially efficient at home against Houston’s lifeless pass rush. With top-12 fantasy outcomes in 6-of-7 starts, Tannehill is a cinch season-long QB1 with enough upside for serious DFS consideration. … Also getting pummeled on the ground, Houston’s defensive front has been gashed for 144/679/3 (4.65 YPC) rushing by enemy backs over the past six weeks. Although Derrick Henry was somewhat slowed by a hamstring injury at Oakland, he returned to the game after a brief absence and logged 19-plus touches for the fourth straight week. Incredibly, Henry has 15 combined rushing touchdowns over his last nine November and December games. Firmly in the NFL rushing-lead race, Henry is only 38 yards behind league leader Nick Chubb.

Tannehill’s 2019 target distribution: A.J. Brown 40; Corey Davis 31; Jonnu Smith 28; Adam Humphries 24; Anthony Firkser 17; Tajae Sharpe 15; Dion Lewis 13; Henry 12; Kalif Raymond 8. … Brown’s stat lines are all over the place in Tannehill’s seven starts, but he’s flashed a monster ceiling with 135-plus yards in two of his last three games. Brown is a boom-bust WR3 play with a genuine WR1 ceiling. … Davis has cleared 50 yards just twice in his last 17 games and is averaging a measly 3.5 targets over the last month. … With Firkser and MyCole Pruitt making sporadic receiving contributions, Smith has settled in as primarily a blocking tight end. Smith ran just 11 routes in last week’s victory – tied for his fewest since Week 6 – and has drawn six combined targets in three games since the Titans’ Week 11 bye. Smith is a low-floor, touchdown-or-bust streamer.