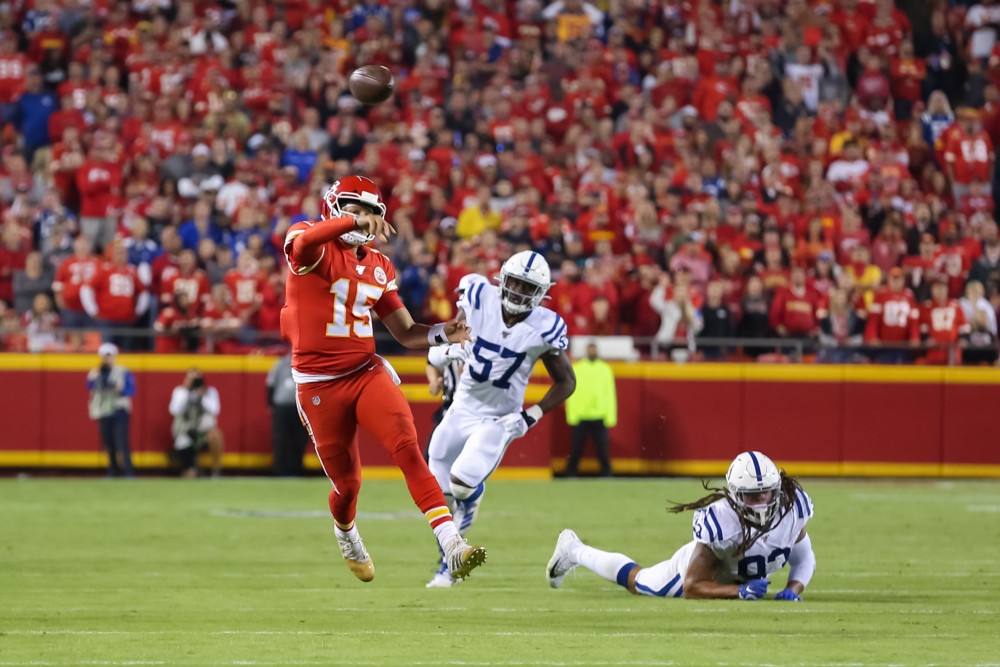 The Titans visit Arrowhead Stadium victorious in three straight win-or-go-home games – all on the road – to face a Chiefs team they downed 35-32 in Week 10, mainly on the back of Derrick Henry (23/188/2). Although Kansas City’s run defense improved in the meantime – holding enemy backs to a combined 85/336/2 (3.95 YPC) rushing line over its last five games – top DT Chris Jones (calf) appears unlikely to face the Titans, and Tennessee’s run-game unit has been white hot for months. The Titans’ offensive line finished the regular season top four in Football Outsiders’ Adjusted Line Yards run-blocking metric and has allowed tackles for loss on just 6.5% of postseason rushing attempts. This is also an opportunity for OC Arthur Smith to dial up a few extra passes to Henry; the 2019 Chiefs gave up a league-high 59.4 receiving yards per game to enemy backs, while Henry set consecutive season highs in playing time in the Wild Card (80%) and Divisional Rounds (83%), suggesting he’ll stay on the field and involved as a receiver if the Titans fall into pass-necessary game script as 7.5-point road underdogs. Henry has not dropped a pass since Week 6, securing 15-of-16 targets during that span. Henry’s ceiling is obviously sky high, but his usage floor also projects as safe after Henry averaged 18 touches and scored five touchdowns in six Titans 2019 losses. Over his last six games, he’s averaging 28 touches with a low of 19.

UPDATE: I went out of my way to listen to more DFS-oriented podcasts than usual this week and was surprised to hear Ryan Tannehill repeatedly downplayed as a tournament option, even receiving considerably less support than Jimmy Garoppolo. Obviously far behind Patrick Mahomes from a sheer raw-points perspective, Tannehill is nevertheless emerging as my favorite GPP quarterback play on this slate.

The touchdown-plus spread on Titans-Chiefs still foreshadows Tennessee needing Ryan Tannehill to do more than manage Sunday’s affair. Offenses facing Kansas City in 2019 averaged 36.4 pass attempts – tenth most in the league – before Deshaun Watson dialed up 52 throws against Steve Spagnuolo’s defense in the Divisional Round, 19 above Watson’s season average of 33. Even as Tannehill’s passing volume has been extremely limited lately, he consistently showed he was capable of producing big games down the 2019 stretch and stayed highly efficient, leading the NFL in yards attempt (9.6), yards per completion (13.6), and passer rating (117.5), and, including playoffs, accounting for multiple touchdowns in 11-of-12 starts. Tannehill has also averaged 20.1 rushing yards with five rushing TDs over his last ten games, while Kansas City yielded the league’s tenth-most QB rushing yards in 2019, then a 6/37/1 rushing line to Watson last week. As Tannehill stands a good chance of combining raised volume with plus efficiency, he is a compelling DFS-tournament play at low cost in this potential shootout.

Tannehill’s 2019-2020 target distribution: A.J. Brown 66; Corey Davis 50; Jonnu Smith 42; Tajae Sharpe 30; Anthony Firkser 27; Adam Humphries 24; Dion Lewis 17; Henry 16; Kalif Raymond 13; MyCole Pruitt 10. … Even more so than tough matchups against Stephon Gilmore and the Ravens’ secondary, Brown’s postseason box-score production has fallen victim to Tennessee’s absence of pass volume with measly target counts of 1 and 3. Recency bias combined with the Titans’ likelihood of throwing more at Kansas City positions Brown perfectly for DFS-tournament stacks with Tannehill after DeAndre Hopkins (9/118/0), hobbled Will Fuller (5/89/0), and Kenny Stills (3/80/1) each exposed Divisional Round leaks in Spags’ secondary. … Ghostly outside of last week’s third-quarter goal-line score, Davis nevertheless maintains punt-play appeal at his affordable DFS cost on similar reasoning to Brown. Davis has run only two fewer routes than Brown through two playoff games. … Smith’s primary function in Tennessee’s offense is to block – he’s done so on 65% of his snaps this season – but Smith did draw six targets when the Titans hosted the Chiefs in Week 6 and flashed big-play ability all year by averaging 10.0 yards per target, second most among NFL tight ends behind Jared Cook. Only the Cowboys allowed more regular season receptions to tight ends than Kansas City (98), and only four teams surrendered more yards to Smith’s position. Firkser and Pruitt’s sporadic involvement can take away from Smith’s receiving workload, but he almost never comes off the field and catches a plus Week 20 draw. … Slot WR Sharpe’s snaps are way down in January because he’s a passing-down player and the Titans haven’t passed much. In a game where they project to do so more frequently as touchdown-plus road dogs against the high-flying Chiefs, Sharpe is worth long-shot DFS-tournament consideration with some potential to be this week’s version of Kendrick Bourne. … Special teamer Raymond blew by Ravens CB Marlon Humphrey for last week’s 45-yard scoring bomb but played only three snaps and is tough to take seriously here.

Patrick Mahomes enters Week 20 having completed 89-of-127 passes (70%) for 1,086 yards (8.55 YPA) and a 10:2 TD-to-INT ratio with an additional rushing score over his last four games. Even as there isn’t a hotter quarterback left in the playoffs, Mahomes was a season-long fantasy disappointment due to his Week 1 high left ankle sprain and Week 7 right kneecap dislocation. In his first game back from the latter injury, Mahomes lit up these same Titans for 446 yards and three touchdowns at far below 100%. Mahomes reconfirmed his health in last week’s record-setting comeback win, ethering the Texans on throws outside the pocket and rushing for a team-high 53 yards. Tennessee yielded the NFL’s 12th-most regular season QB rushing yards and 143 yards rushing to Lamar Jackson last week, while Tyreek Hill, Travis Kelce, and Damien Williams’ matchups are all near optimal. The Titans’ defense also carries into Conference Championship Weekend a lowly 21% pressure rate, third lowest in the league. It almost goes without saying that Mahomes’ ceiling is monstrous. He deserves to be the highest-owned quarterback on Week 20’s slate.