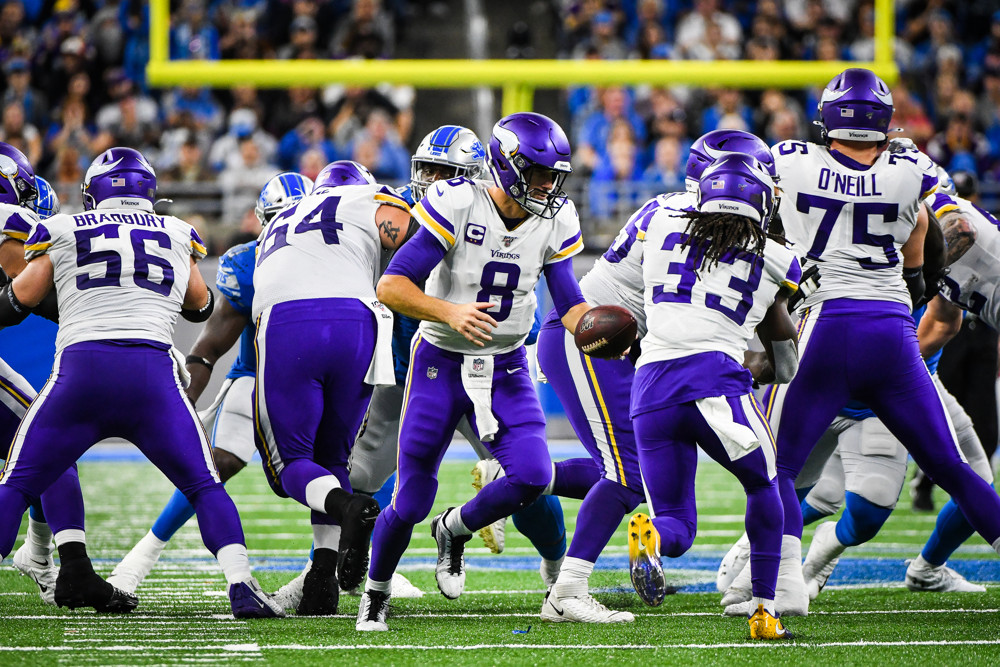 On the road facing a near-full-strength Chargers defense that’s still playing hard despite its 5-8 plight, this is an imposing matchup for Minnesota’s passing game in what sets up as a relatively low-scoring affair. Just 1-of-13 quarterbacks to face Los Angeles has exceeded QB12 fantasy results, while Adam Thielen (hamstring) remains questionable, and teams facing the slow-paced Bolts are dealt a limited hand averaging a league-low 57.8 offensive plays per game. I’m projected Kirk Cousins to finish outside the top-15 fantasy passers for a third straight week. … As expected, the Vikings were able to work in Alexander Mattison (16 touches) more than usual in last Sunday’s smooth-sailing victory, building a 17-0 first-half lead and shutting out the Lions for three-plus quarters. But Dalvin Cook showed his chest injury was barely problematic with 20-plus touches for the tenth time in 13 games. As Week 15 sets up as likely to be far more competitive, we should anticipate Cook resuming full-time bellcow duties and Mattison returning to his pace-change role. This is a mildly above-par matchup; enemy backs have touched up the Bolts for a weekly average of 5.5 receptions and scored 13 all-purpose TDs in 13 games.

Although Thielen seems likely to return after resuming practicing, his risk factor is high having played just 16 snaps since Week 6 due multiple hamstring setbacks. Thielen did log 75-plus yards and/or a touchdown in six of his previous seven games before initially going down, and the Chargers have given up the NFL’s second-fewest fantasy points to wide receivers. I think he’s best approached as a low-floor WR3 option. … Although Stefon Diggs seems likely to attract Casey Hayward’s shadow, Thielen’s return would at least make that a bit less certain, and this is a matchup we should be willing to fade with Diggs sitting atop Josh Hermsmeyer’s Week 15 Buy Low Air Yards Model. Diggs’ ceiling is always sky high – he’s topped 90 yards six times in the Vikings’ last ten games – and elite route-running chops render Diggs capable of winning against even the NFL’s best corners. … Twelve different Vikings caught Week 14 passes from Cousins, a reminder that Minnesota’s passing-game distribution can be spread thin on a run-first team with Thielen tentatively due back to command a meaningful target share. If Thielen does play, the likes of Kyle Rudolph, Irv Smith, and Olabisi Johnson will be removed from fantasy playability.

Back home after last week’s energized, 45-10 road romp over Jacksonville, a 5-8 Chargers team that is still playing hard gets its chance to play spoiler against the Vikings. Unfortunately, Philip Rivers’ season-best Week 14 game is tough to chase; just 3-of-13 quarterbacks to face Minnesota have beaten QB14 fantasy results, while Rivers himself has done so in just 4-of-13 starts. Los Angeles’ wide receiver corps does draw enough favorable matchups for Rivers to stay stapled into two-QB-league lineups. … As nothing overly positive stands out about Melvin Gordon or Austin Ekeler’s Week 15 draws, they must be characterized as bet-on-talent/volume plays against the Vikings. Leading all NFL backs in yards per touch (7.1), Ekeler has demonstrated exceptional consistency with 80-plus yards and/or a touchdown in 12-of-13 games and is averaging a rock-solid 12.4 touches over the last five weeks despite Gordon’s resurgence. Gordon’s last five touch counts are 23 > 23 > 17 > 22 > 17, topping four yards per carry in all of them. Even against Minnesota’s stout front seven, Ekeler and Gordon are both locked-in RB2s.