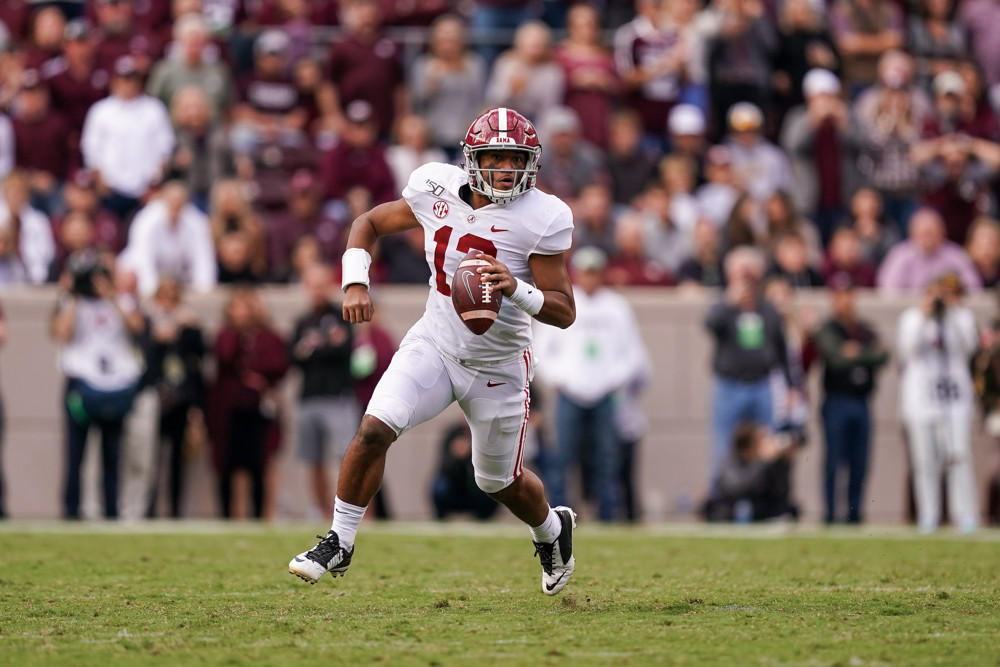 Perhaps in an effort to convince Burrow’s camp they’re finally serious about winning, the Bengals were uncharacteristically aggressive in free agency. They can surround Burrow with an underrated offensive cast that includes A.J. Green, Joe Mixon, Tyler Boyd, John Ross, Auden Tate, Giovani Bernard, and now-healthy 2019 first-round OT Jonah Williams. Aside from his advanced age – he turns 24 later this year – Burrow checks nearly every box as an elite quarterback prospect with pinpoint ball placement from the pocket and on the move, natural anticipation, plus athleticism, and outstanding leadership traits.

Supplementing DE Jonathan Allen, EDGEs Ryan Kerrigan and Montez Sweat, DE Matt Ioannidis, NT Daron Payne, and DT Tim Settle with Young could turn Washington’s underrated defensive front into one of football’s best. It would also be a means of planning for the future; Kerrigan turns 32 before the season and is scheduled for free agency next year. Young broke Ohio State’s single-season sack record as a 2019 junior (16.5) despite serving a two-game suspension for an innocuous NCAA rules violation.

In this projected trade, the Bolts send the Nos. 6 and 37 picks, a 2021 fourth-rounder, and CB/S/PR/KR Desmond King to Detroit in exchange for No. 3 overall. Tyrod Taylor becomes the Chargers’ bridge until Tua is deemed physically and mentally ready to succeed Philip Rivers. GM Tom Telesco has built a deep, talented defense to keep his team afloat in the meantime, and the Bolts can surround Tagovailoa with young playmakers Keenan Allen, Mike Williams, Austin Ekeler, and Hunter Henry when his time arrives.

Simmons shined at safety, outside and inside linebacker, and even slot cornerback at Clemson, then confirmed his freakish athleticism by running 4.39 with a 39-inch vertical and 11-foot broad jump at 6-foot-4, 238 in Indy. His versatility and range capable of making players around him better, Simmons’ multi-phase impact would add an entirely new dimension to a Giants defense that ranked 27th (2019), 24th (2018), and 24th (2017) in Football Outsiders’ DVOA over the past three years. Simmons is everything GM Dave Gettleman hoped failed trade acquisition Alec Ogletree would be, and more.

This is a dream scenario for rebuilding Carolina, stopping Okudah’s mini-fall after losing top corner James Bradberry to the Giants. One of this year’s cleanest draft prospects coming out of Ohio State’s defensive back factory, Okudah would fill a glaring need at a premium position for the Panthers.

Especially once the Cardinals locked up LT D.J. Humphries on a three-year, $45 million deal, their attention turned to right tackle after Justin Murray struggled in 14 starts last season. On game tape, Wills is the complete package with fast hands, athletic movement, quick feet, and a workmanlike mentality. Wills would fit seamlessly into Arizona’s dominant rushing attack.

Not only is Wirks a freak athlete with optimal physical dimensions, but he became the first true freshman offensive tackle ever to start on Hawkeyes coach Kirk Ferentz’s offensive line. No school in the nation trains O-Linemen better than Iowa. This would be an ideal match of talent, fit, and need.

Channeling old boss Al Davis, Jon Gruden lands his version of division nemesis Tyreek Hill in Ruggs, whose lethal long speed should reveal to Raiders management whether or not Derek Carr is their long-term answer. Carr’s persistent unwillingness to pull the trigger on downfield throws has been a significant Raiders offensive obstacle. But Carr also hasn’t been playing with a full downfield deck.

Jeudy is easily the top route runner in this year’s draft, and his position versatility would fit perfectly into Kyle Shanahan’s multiple offense. A cross between Odell Beckham and Antonio Brown in their primes, Jeudy is very arguably one of the ten best wide receiver prospects to come out of college over the last decade.

Although Jackson is commonly billed as a “project” player, his profile suggests otherwise. He made 25 starts in the Pac 12, all at left tackle. His physical dimensions are ideal for an NFL blind-side protector, and Jackson tested as this year’s third-most athletic offensive lineman. Loaded on defense and in the passing game, the Bucs’ greatest weakness remains O-Line play.

Assuming Lamb lasts this long – I think his range is Nos. 9-16 – the Broncos shouldn’t think twice about pulling the trigger on this year’s premier post-catch receiver. In an ideal scenario, Courtland Sutton threatens the vertical quadrants while Lamb runs higher-percentage, lower-aDOT routes and Noah Fant takes major strides at all levels of the field, all making life easier on first-year starter Drew Lock.

The Falcons’ roster is flush with holes. Foremost among them is cornerback, a position at which this year’s draft lacks depth. Few teams in the league prioritize need more than Atlanta in the draft.

Defensively, improving up front took precedence for the Cowboys’ offseason. Here, they double down on edge defender after losing Robert Quinn. Chaisson’s college box-score production doesn’t stand out, but his pass-rush efficiency does as part of LSU’s deep pass-rush gang.

Herbert slips into the Dolphins’ waiting hands as the quarterback the organization is reported to prefer over Tua Tagovailoa. Herbert offers an ideal combination of arm strength, athleticism, and smarts, but he would likely sit behind Ryan Fitzpatrick for most of year one with no NFL offseason workouts on the horizon.

Especially after they whiffed on Byron Jones and their deal with Eli Apple fell through, the Raiders’ cornerback plan came apart in free agency. Here, they bounce back with underrated Johnson, a high-floor ballhawk who no one could throw successfully against in the Pac 12.

Safety has been a longtime Jacksonville hole. And even during their defensive glory days, tackling was a Jaguars weakness. A discount Isaiah Simmons who made an impact from several positions, McKinney would help shore up the Jags’ middle-of-field pass coverage. Telvin Smith’s unanticipated pre-2019 retirement left Jacksonville emptyhanded at an increasingly critical NFL position.

Already fielding one of the league’s strongest possession-receiver games via Zach Ertz and Dallas Goedert, plus Miles Sanders and Alshon Jeffery, the Eagles opt for Reagor’s vertical skills to address a need. In an ideal if perhaps improbable world, Reagor and J.J. Arcega-Whiteside would encompass Philly’s two-wideout set of the future with Jeffery and DeSean Jackson unlikely to be around in 2021.

In this scenario, the Vikings replace Stefon Diggs with Mims, whose size-speed combination at 6-foot-3, 207 with 4.38 jets makes him a perfect downfield play-action threat across from Adam Thielen. Much like D.K. Metcalf entering the league last offseason, Mims lacks route precision and primarily won with athleticism in college. He can do the same early in his NFL career and grow into a true No. 1 receiver.

Just as onetime pupil Nick Saban acknowledged times had changed in college football by switching from pro-style to spread-offense tactics, here Bill Belichick begins the post-Tom Brady era by tapping a dual-threat quarterback to compete with in-house option Jarrett Stidham. Love committed too many turnovers operating as a one-man band in 2019, but his high-ceiling skill set was never in doubt.

I wanted to give them LSU linebacker Patrick Queen, but intel led me elsewhere. Emmanuel Sanders is an aging short-term fix at No. 2 wideout, and Tre’Quan Smith hasn’t established himself as a viable No. 3. Sean Payton is apparently infatuated with Aiyuk’s 4.42 wheels and run-after-catch dynamism.

The 2019 Dolphins finished dead last in both sacks and quarterback hits. Long and bursty with an exciting college growth curve, Gross-Matos was an off-the-edge terror the past two seasons in Happy Valley. He projects as an early-career sub-package rusher with long-term every-down upside.

Settled at free safety with Quandre Diggs, the Seahawks find their new box-safety version of Kam Chancellor in Chinn, a plus-sized, small-school tone setter capable of pushing Bradley McDougald in year one and replacing him no later than 2021, when McDougald’s contract expires. Chinn is the biggest, most athletic safety in this draft, and Seattle has long emphasized those traits in defensive backs.

Trampled by Derrick Henry in their year-ending playoff loss, the Ravens have dedicated their offseason to shoring up a soft defensive front. They stole Calais Campbell for a fifth-round pick. They made a mini-splash with Derek Wolfe in phase three of free agency, took a one-year flyer on 334-pound Justin Ellis, and re-upped DE/DT Jihad Ward. A three-year, $30 million deal with space eater Michael Brockers fell through. The logical next step is adding second-level athleticism. A run-and-hit linebacker the Ravens have lacked since letting C.J. Mosley walk, Murray’s speed and range consistently pop off his tape.

Tennessee’s defense needs more pass rush after last year’s unit finished 17th in Sack Rate (6.7%) and 27th in QB Hit Rate (13.4%). Epenesa’s Combine workouts were concerningly subpar – he’s a mere 15th-percentile SPARQ athlete – but his Power-5 production can’t be dismissed after tallying 22 sacks and eight forced fumbles over his final two college seasons. Epenesa also fits coach Mike Vrabel’s profile as a high-motor prospect with plus intangibles and a workmanlike approach on the field. On the edge for the Titans, Harold Landry has yet to fully meet expectations and Vic Beasley is at best a short-term fix.

A discount Michael Thomas, Jefferson led the nation in slot receptions and slot yards for last year’s NCAA champs and was especially dominant in contested-catch situations. Allen Lazard is one of the league’s weakest No. 2 wideouts, while Devin Funchess was a shot-in-the-dark signing. Jefferson would give Aaron Rodgers a physical possession receiver to complement do-it-all No. 1 WR Davante Adams.

LCB Richard Sherman is 32 years old, and the 49ers played musical chairs at right corner throughout last season. A twitched-up 4.42 speed merchant at 6-foot-1, 195, Terrell broke onto the scene as a true sophomore starter, then was outright avoided by enemy passing games last year.

Their other consideration being TCU defensive tackle Ross Blacklock as a contingency plan behind franchise-tagged Chris Jones, the Chiefs instead opt for pass coverage over pass rush with Fulton, a well-built cornerback (6’0/197) with 4.46 speed and extensive experience in both off- and press-coverage techniques. Fulton is NFL ready, and corner is the weakest position on Kansas City’s roster at present.