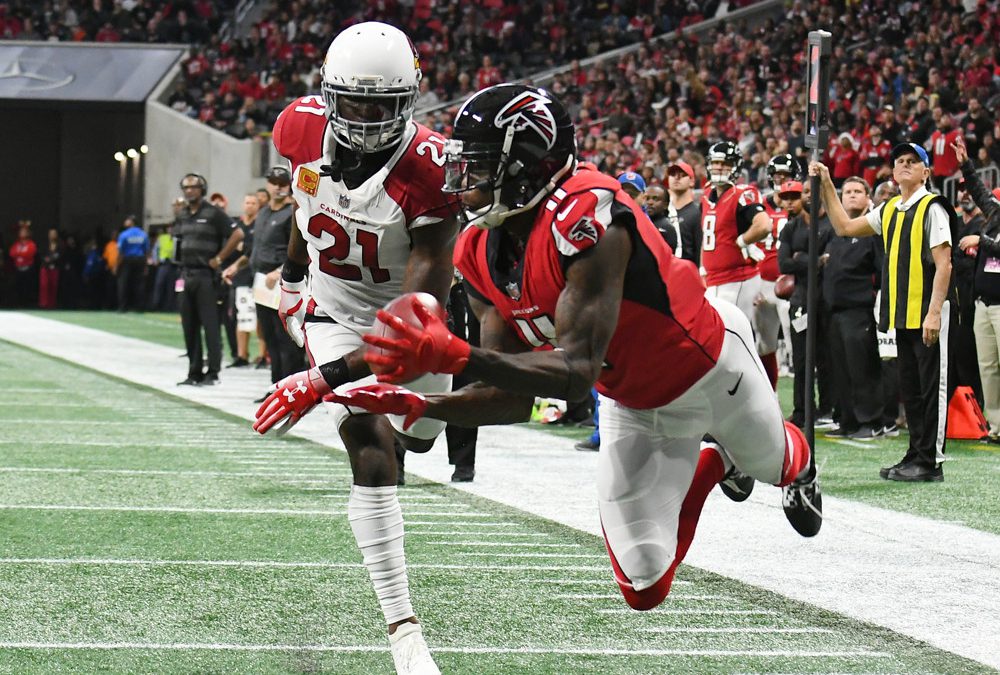 The second-best season of Matt Ryan’s career flew below radars due to Atlanta’s 7-9 finish. Ryan threw for only 20 fewer yards and three fewer touchdowns than in his 2016 MVP campaign, capitalizing on the Falcons’ inability to stop anyone, which forced them to become a shootout team. As MLB Deion Jones (foot), FS Ricardo Allen (Achilles’), SS Keanu Neal (ACL), and DT Grady Jarrett (high ankle sprain) combined for 40 missed games, Atlanta yielded the NFL’s eighth-most points (423) and countered with the tenth most (414). Although Ryan’s floor is raised by his elite weapons and home-dome environment – he averages a very-nice 0.69 more career yards per attempt indoors – Ryan is due for negative-TD regression after outkicking his career TD Rate (4.8%) by a full percentage point last year, and the Falcons’ run game and defense are both likely to take 2019 steps forward. Under “new” OC Dirk Koetter in 2012-2014, Ryan’s fantasy results were QB7 – QB15 – QB7. His finishes over the last three years were QB2 – QB15 – QB2.

Julio Jones also historically benefits from playing indoors, noteworthy since the 2019 Falcons will play 13-of-16 games beneath domes and/or retractable roofs. Jones averages 1.06 more career yards per catch and 0.72 more yards per target in enclosed environments. This year, Atlanta opens with nine straight domed affairs. Although Julio’s high-variance touchdown totals are a perennial point of fantasy frustration, his core production is not with 1,400-plus yards in five straight years and the NFL’s most receiving yards per game of all time (96.7). Injuries have become less of a concern as Jones’ career has progressed; he’s played in 77-of-80 possible games (96%) in the past half decade. He’s a shoo-in first-tier WR1 along with Davante Adams, DeAndre Hopkins, Odell Beckham, Tyreek Hill, and Michael Thomas.

Calvin Ridley turned in a sensational debut season, leading all rookie receivers in touchdowns (10) and finishing fourth in yards per route run (1.77) with an efficient 69.6% catch rate and 5.7 yards after catch per reception, the NFL’s No. 18 mark among 125 qualified wideouts. Inevitable TD regression hit when Ridley went scoreless over Atlanta’s final six games, however, and the Falcons’ deep pass-catcher corps adversely impacted Ridley’s consistency with 11-of-16 games below 55 yards. As Atlanta’s team pass attempts appear likely to dip and his rookie TD Rate lacks sustainability, Ridley would likely need an injury to Julio, Mohamed Sanu, or Austin Hooper to become more than an up-and-down WR2/3 scorer.

The subject of offseason trade rumors, Mohamed Sanu will stay on as Atlanta’s No. 3 receiver after the Falcons’ unmet asking price was a reported third-round pick. At age 30, Sanu has settled in as a low-upside role player who ran 76% of his routes in the slot last year and has never topped five touchdowns in an individual season. Sanu’s complementary usage caps his ceiling barring injuries elsewhere in Atlanta’s pass-catcher corps. Sanu is best approached as a best-ball roster-filling WR6/7.

Austin Hooper continued his annual improvement as a third-year pro with 2018 career bests across the board (71/660/4). Purely a possession receiver, however, Hooper caught just three passes traveling 20-plus yards downfield and has just eight such receptions through three NFL seasons. Among tight ends with at least 40 targets, Hooper’s very-nice 6.9-yard Average Depth of Target ranked 17th in the league last year. He did finish top ten at the position in both snaps (76%) and targets (88) and is a high-floor, if low-ceiling fringe TE1. Hooper also happens to be in his contract year.

With Tevin Coleman in San Francisco, Devonta Freeman enters 2019 with the highest volume projection of his career on a Falcons team very likely to run more than it did last season, when ex-OC Steve Sarkisian’s offense ranked 30th in rushing attempts. The Falcons signed LG James Carpenter, T/G Ty Sambrailo, and OG Jamon Brown to multi-year deals before using first-round picks on RG Chris Lindstrom and RT Kaleb McGary. Yet it’s fair to wonder if Freeman’s peak is behind him; he sprained multiple knee ligaments in 2017, missed three 2018 games after reinjuring the knee last Week 1, sprained his foot in Week 6, wound up needing groin surgery, and was shut down for the year. Freeman did receive full clearance for camp and returns as the unquestioned lead back on a high-scoring team. Freeman totaled 1,447 yards with nine touchdowns and 49 receptions over his previous 16 games entering last season. If the injuries are truly behind him, that kind of production would make Freeman a screaming value at his third-/fourth-round ADP.

Ito Smith is favored for No. 2 duties behind injury-plagued Freeman, yet Smith is coming off his own meniscus surgery and didn’t quite blow his rookie year away, managing 3.5 yards per carry and 5.6 yards per catch and finishing 36th among 56 qualified running backs in yards after contact per rushing attempt (2.73). Although Atlanta’s run volume is likely to rise, it won’t necessarily be by much. Including the Falcons (2012-2014) and Bucs (2015-2018), Koetter’s last seven offenses ranked 26th, 32nd, 27th, 8th, 7th, 26th, and 22nd in carries. To lock up Atlanta’s No. 2 job, smallish Smith (5’9/200) will have to hold off plus-sized power backs Brian Hill (6’1/219) and Qadree Ollison (6’1/228) in camp. With 4.54 jets, Hill has a 74th-percentile Speed Score and parlayed 16 carries into 145 yards (9.06 YPC) in last year’s final two games with Freeman and Smith on the shelf. Hill also showed adequate receiving skills with 41 receptions in three years at Wyoming, where the Cowboys ran a decidedly run-first attack. Don’t be surprised if Hill usurps Smith as the Falcons’ No. 2 back in camp.

The Falcons’ Win Total is 8.5 games, a mark they’ve exceeded just twice in the last six seasons. Last year’s team mildly underachieved its Pythagorean Win Expectation by 0.8-1.2 games, finishing with an at-expectation 4-4 record in one-score contests and -9 point differential. Getting back Devonta Freeman, Keanu Neal, Ricardo Allen, and Deion Jones improves the roster on paper, but the former three are by no means out of the injury woods, and Atlanta’s pass rush sets up as one of the poorest in the league. The Falcons also draw the NFL’s sixth-toughest schedule based on Opponent Win Totals. I like Atlanta’s under if sportsbook shoppers can find it at 9.0, but this is a bet to avoid at 8.5. I’d be willing to chase the over if it moves to 8.0.