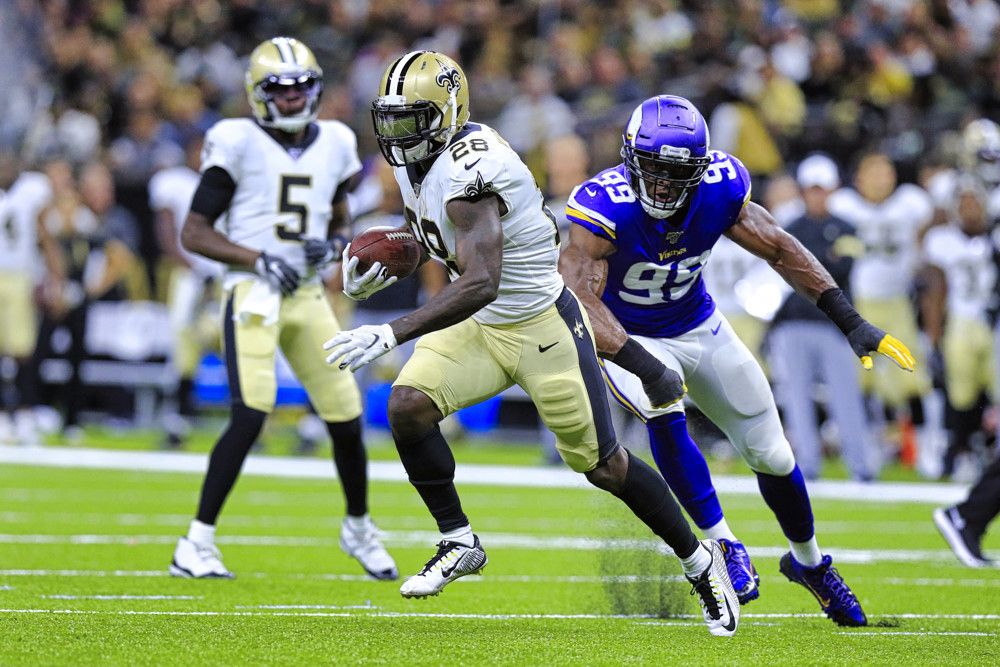 Well, they’re actually right if we’re focused on player performance due to the tiny sample sizes and vanilla scheming. But if we’re focused on usage, preseason matters very much. By usage, I mean who is running with the first-stringers, who is forced to play when the rest of the starters sit and where on the field players are being used.

Similarly, no one gave Phillip Lindsay a shot to win the starting running back in Denver a year ago. But in the preseason, Lindsay stole significant first-team work from Freeman and put himself on meticulous drafters radar. Taywan Taylor’s alleged “sleeper” status proved to be fraudulent when he ran as the No. 4 receiver last preseason, Rashaad Penny’s first-round (real NFL draft) status was exposed as irrelevant, Peyton Barber separated massively from Ronald Jones – the list goes on and on.

Below are the most important usage takeaways I saw in Week 1 of this year’s preseason action.

Editor’s Note: There are still three weeks left of preseason DFS. Adam Levitan, Evan Silva and Sean Newsham will continue to be on top of every situation. Check out nightly shows, tiers and depth charts in our Preseason DFS Package. It’s $60.

1. Latavius Murray steps right into Mark Ingram role
Many people expected Alvin Kamara’s usage to spike now that Mark Ingram is gone. That was never the plan. Sean Payton has been very clear that he prefers to keep Kamara’s touches in check (listen to Episode 1 of our podcast), which is a big reason he gave Latavius Murray a 3-year, $15M contract in March. Although Drew Brees didn’t play Friday, the Saints let their starters run for 15 snaps and Kamara got 10 of them while Latavius got five. That 65%/35% split, similar to what we saw with Kamara/Ingram, should continue into the regular season. Murray continues to be a strong mid-round selection as someone who will have plenty of value when Kamara is healthy and will be a week-winner if Kamara goes down.

2. Dante Pettis hasn’t locked starting gig
The bad vibes on Dante Pettis have been trickling in for a couple weeks now. First came reports that Pettis was having a “rough” camp and that he had ceded the starting split end role to Marquise Goodwin/Kendrick Bourne. Those reports were confirmed in the first preseason game when the 49ers rested Jimmy Garappolo, George Kittle, Tevin Coleman, Matt Breida and numerous other starters – but forced Pettis to play 17 snaps. After the game, coach Kyle Shanahan reiterated that he needs to see more out of Pettis and beat writers are speculating that there won’t be a true No. 1 wide receiver. Other than George Kittle, this pass game is lacking clarity right now and Pettis needs to be downgraded.

3. Chris Godwin takes over the slot-plus role
The Chris Godwin hype train isn’t slowing down anytime soon – and nor should it. Godwin was in on all 12 of Jameis Winston’s snaps Friday, assuming the every-down role we all knew he would after DeSean Jackson and Adam Humphries left. Most importantly, Godwin kicked into the slot all four times the Bucs went to a 3-WR formation. That slot-plus role is the same way Bruce Arians coaxed monster seasons out of Hines Ward and Larry Fitzgerald in previous stops. Already armed with unique talent and the nut situation (no running game, no viable No 3 WR, leaky defense, aggressive quarterback, plus scheme), Godwin’s chances of fulfilling lofty expectations this season are rising.

4. Phillip Lindsay keeps nose in front of Royce Freeman
Joe Flacco played 11 snaps Thursday and starter Phillip Lindsay was in for seven of them. Royce Freeman came on for four. The Flacco group did get five snaps inside the 10-yard line, of which Lindsay got three and Freeman two. It’s clear Lindsay has his nose in front right now, but there’s going to be a timeshare here. It did help Lindsay’s outlook a bit that Theo Riddick fractured his shoulder in the game and will miss 6-8 weeks. If Lindsay can beat out Devontae Booker and Riddick for pass-down work, losing some early-down carries to Freeman won’t hurt as bad.

5. Austin Ekeler shows up big as feature back
With no end in sight to the Melvin Gordon holdout, the Chargers backfield situation is worth watching closely. Their starters played 16 snaps Thursday and starter Austin Ekeler was in for 12 of them. Ekeler also got 2-of-3 touches inside the 10-yard line. Justin Jackson got the remaining snaps at running back. Of course, Ekeler was wildly efficient just as he typically has been when getting chances. Despite a couple poor games in relief of Gordon last year and a fumble Thursday, I’m extremely optimistic on his outlook if Gordon’s holdout extends into the regular season. Philip Rivers projects to again be among the league-leaders in pass attempts to RBs and Ekeler excels in the pass game.

6. Kenyan Drake still ahead of Kalen Ballage
There’s been a ton of smoke out of Dolphins camp that Kalen Ballage had actually passed Kenyan Drake for the starter role. That wasn’t the case on Thursday as Drake started and was in on nine of Ryan Fitzpatrick’s 13 snaps. Ballage mixed in for just four of the 13 snaps. I’ll continue to track this usage through the preseason, but Drake’s efficiency in the pass game combined with how often the Dolphins will be trailing this season is notable. It wasn’t exciting at a 4th– or 5th-round ADP, but the Ballage news has caused Drake’s ADP to tank.

7. Jets’ 3-WR formation is set
Sam Darnold played seven snaps Thursday, used 11 personnel for all of them and had the same three WRs on the field for all of them. Robby Anderson, Jamison Crowder and Quincy Enunwa will be Darnold’s primary weapons along with Le’Veon Bell out of the backfield and Chris Herndon (once off suspension). Crowder’s slot role projects to result in the most volume and Anderson’s special downfield ability will result in the most spike weeks.

8. Patriots give Damien Harris status
The Patriots were very thin at running back Thursday night as Sony Michel, James White and Rex Burkhead all sat out. But instead of risking Damien Harris, they forced core special teamer Brandon Bolden to play the entire first half and also saddled up Nick Brossette for 22 carries. Third-round rookie Harris did dress, but didn’t get in the game. We can take that as a good sign for his early-season role – he’s getting treated as a player who doesn’t need work in a preseason Week 1 setting.
UPDATE: After the game, it was reported Harris is actually dealing with a minor wrist issue. That’s likely the reason he didn’t play.

9. Mark Andrews won’t be a full-time player
Mark Andrews is an athletic, talented, explosive YAC kind of tight end. But his volume is in doubt in part because of the Ravens’ extreme lean toward the run and in part because of usage. Lamar Jackson played 16 snaps on Thursday and Andrews was only in on six of them – blocker Nick Boyle played 10 and Hayden Hurst played six. Yes, Andrews was mostly in on pass plays. But this kind of role often leads fantasy tight ends to trouble as only playing on obvious pass downs caps ceiling at an already low-ceiling spot.

10. Foster: Australian for #NoSex
Robert Foster was one of my favorite players to watch and roster late last year as his speed/athleticism was a perfect fit with Josh Allen’s wild scrambling and extreme downfield aggression. Unfortunately for him, the Bills added a redundant skill set in John Brown and now Foster is buried. Allen played 18 snaps on Friday night and here are the WR snap counts: Brown 17, Cole Beasley 13, Andre Roberts 11, Zay Jones 9, Isaiah McKenzie 1, Foster 0. You hate to see it.