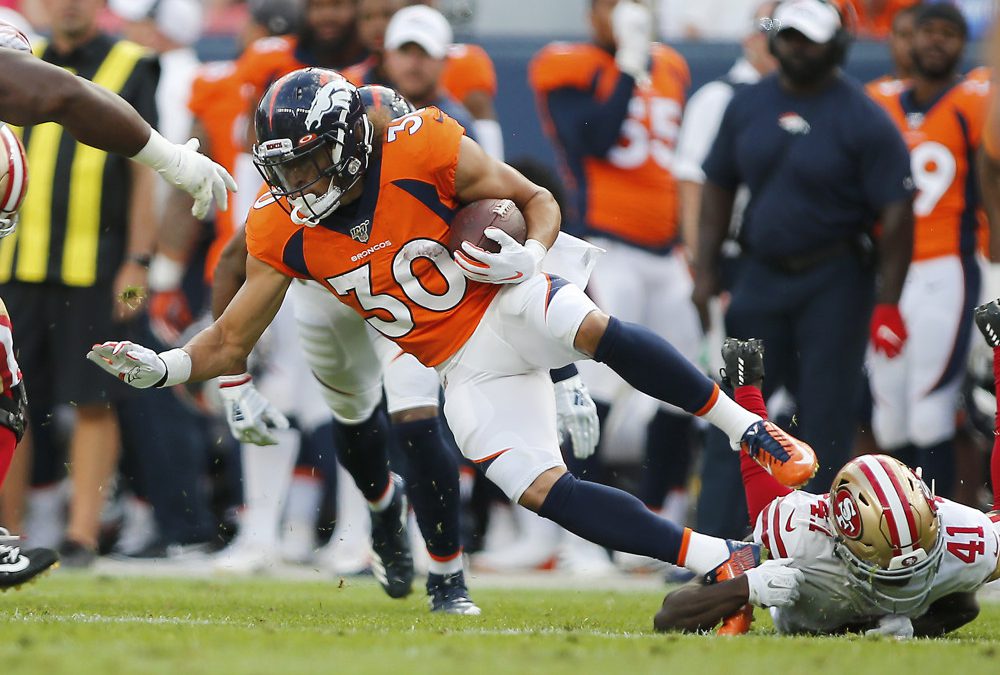 Note that historical data suggests we want to avoid veteran players changing teams, particularly at the wide receiver position. And it makes sense – football statistics are not earned in a vacuum like baseball or even basketball. In the NFL, every player’s stats are strongly connected to his coaches, the scheme, his teammates and that unquantifiable chemistry. No matter how productive a wideout was with one team, it’s far from a lock he’ll be productive on a new team. In fact, it’s an upset when a top-tier wideout is more productive in a new home.

So while I didn’t spend a lot of time on players such as DeAndre Hopkins and Stefon Diggs here, just know that more downside has been introduced via their location change.

LOSERS
1. Julian Edelman, WR, NE
Even if you believe Edelman hasn’t lost any physical ability as he enters his age-34 season, you have to concede he’s lost league-best chemistry. The connection between Tom Brady and Edelman was obvious to anyone with two eyes as he racked up 9.3 targets per game. While I don’t think the ability downgrade from this version of Brady to Jarrett Stidham (if he starts) is that stark, the downgrade in football IQ, ball placement and trust will be massive. When Brady missed the first four weeks of the 2016 season, Edelman went 7-66-0, 7-76-0, 4-38-0 and 1-16-0.

2. Phillip Lindsay, RB, DEN
I’m not sure if Melvin Gordon is truly a better runner than Phillip Lindsay, but it’s obvious Lindsay is in big trouble now. Gordon is better in the pass game than Lindsay and also has the size the Broncos are looking for around the goal-line. Over his first two NFL seasons Lindsay has just 70 catches in 31 games as a full-time player and stands 5’8/190. Even if Lindsay earns an even total touch count with Gordon, it’s extremely difficult to sustain fantasy value without pass-catching and goal-line work. Those are the departments we value most as fantasy players.

3. Austin Hooper, TE, CLE
Hooper goes from one of the NFL’s most consistent offenses and stable quarterbacks in Atlanta to a lot of uncertainty in Cleveland. It’s equally important that he’s entering an offense with more mouths to feed. Odell Beckham, Jarvis Landry, David Njoku and Kareem Hunt are all very strong talents who will demand target share. So while Hooper is certainly solid, he needs volume to find a ceiling because he’s not a field-stretcher or YAC guy. Hooper was 15th among qualifying tight ends in yards per reception last season and 21st in yards after contact per reception. The 7.4 raw targets per game Hooper saw last year are unlikely to come in Cleveland, even as they establish a 2-TE base under new coach Kevin Stefanski.

4. John Brown, WR, BUF
Brown, typically a boom/bust kind of asset, surprisingly found consistency as Buffalo’s No. 1 wideout last season. He scored at least 10 DraftKings points in 13-of-15 games and only went over 20 points twice all year. That solid floor was a surprise given the Bills ranked 21st in pass attempts per game and Josh Allen was 32nd among qualifying QBs in completion percentage. Now that the Bills have acquired Stefon Diggs via trade, we can no longer consider Brown the top target. Expect him to fill a more natural lid-lifting role while Diggs handles the intermediate routes as the alpha. In such a low-volume, low-efficiency pass game, Brown’s game log projects to be all over the map in 2020.

5. Mike Evans, WR, TB
Too many people are discounting the impact of game environment on the statistical output of Evans and Chris Godwin. While they are undoubtedly great players, the hyper-aggression of Jameis Winston and Ryan Fitzpatrick bred fantasy points. Winston and Fitzpatrick were in the top-2 of aDOT, did not care about throwing interceptions, were among the league-leaders in pick-6s, rarely threw to RBs and got the Bucs into so many wild shootouts. Tom Brady is the exact opposite. His games will be managed, under control, feature far more short passes and be played smart. The hit to Godwin isn’t as severe due to his slot role, but it’s still there. Evans’ days of getting 50/50 balls lobbed up to him 50 yards down the field consistently are done. The days of the Bucs having 42-35 games as a solid portion of their range weekly are also done.

6. Austin Ekeler, RB, LAC
If the cards broke right, Ekeler had paths to first-round value in PPR leagues. However, the Chargers decision to move on from Philip Rivers and move forward with Tyrod Taylor plus a (likely) high draft pick at QB puts a dent in that. Whereas veteran pocket-passers like Tom Brady, Rivers and Drew Brees target the running back position at league-high rates, more mobile QBs like Taylor typically don’t. Taylor will also steal pass attempts with designed runs plus scrambles, and will steal some goal-line attempts with his legs. So while the artist formerly know as TyGod is an underrated asset in both real life and fantasy, Ekeler’s value would have been stronger with a QB like Rivers or Brady.

ALSO
7. Curtis Samuel, WR, CAR – New starter Teddy Bridgewater had the lowest ADOT in the NFL last season. Perhaps Samuel is used better under the new regime, but the underneath targets are still going to get soaked up by Christian McCaffrey, DJ Moore and Ian Thomas.

8. Mitchell Trubisky, QB, CHI – It’ll be a camp battle between Trubisky and Nick Foles. Foles has strong familiarity with the scheme thanks to coaching conections.

9. Tre’Quan Smith, WR, NO – Tre’Quan had his chances to run away with the No. 2 WR job, but never showed more than flashes. Now Emmanuel Sanders is in town on a $16M contract to run with Michael Thomas.

10. DeAndre Hopkins, WR, ARZ – The days of Hopkins seeing 30% targets are over as he leaves Houston. However, still optimism based on a more QB-stats friendly scheme.