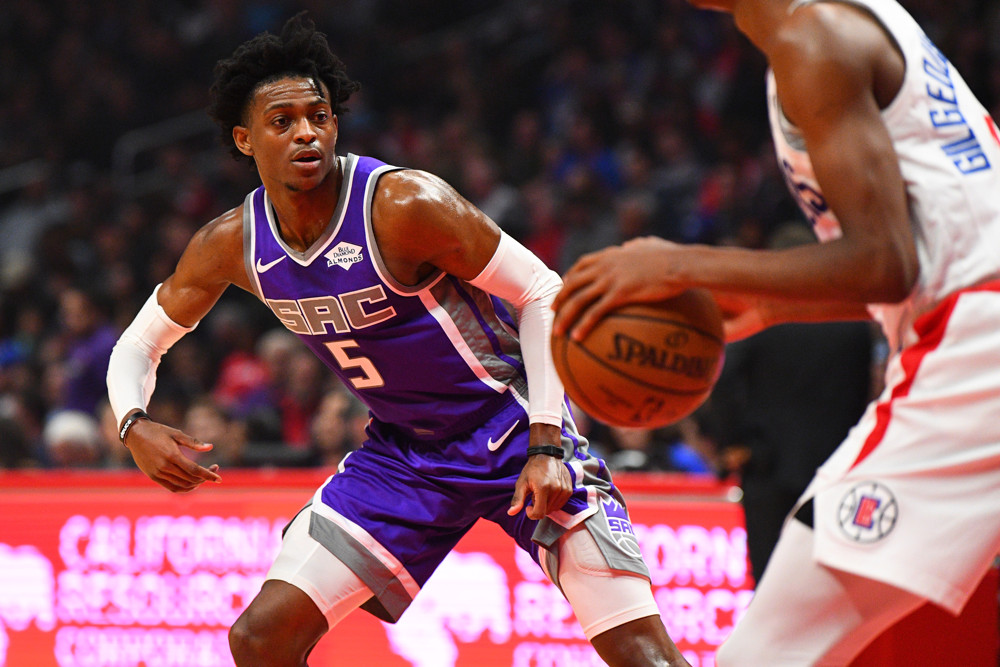 Welcome to the second edition of Quotes and Notes! If you missed it, check out how the series kicked off on Thursday right here. One thing I wanted to add is that most of the time this column will try to hit some of the under-the-radar stories that may not get the shine that you’ll see on other sites, which can help get you an edge on filling out your rosters when we start up in a couple weeks.

1. Rudy Gay says he’s OK with playing the five even if it’s not ideally where he’d want to play, and Keldon Johnson says he’s ready for a role as a small-ball four. Coach Gregg Popovich says the “goal is development right now” and this “specific situation, development is more important than anything.”

A lot going on here. If you missed it, LaMarcus Aldridge (shoulder) and Trey Lyles (appendix) will not play in Orlando. As mentioned on Episode 2 of the ETR NBA pod, a new tool for looking at news is looking at some workout videos and trying to identify some rotation wrinkles with trends. That’s especially true with a team like the Spurs with coach Gregg Popovich because he tends not to reveal valuable info, which also makes his quote above stand out even more. One thing that has been a constant has been Rudy Gay and Patty Mills being on the same team in practices (based on what’s been posted). With Pop having a clear affinity for Mills off the bench, a possible takeaway from that is that Gay could be coming off the bench as a PF/C.

For what it’s worth based on the five-ish videos on the Spurs Twitter, today (Friday) is the first time I saw DeMar DeRozan out there in 5-on-5 while he was doing some on-court stuff before. Maybe he just doesn’t need the run out there (maybe it’s just a coincidence), but given the talk of the youth movement, how the Spurs have very little to play for and how DeMar could enter free agency (player option), you’d have to think he could sit out games. It’s also worth a mention that the DeMar’s Friday group in the video was Dejounte Murray, Derrick White, DeMar and Jakob Poeltl for sure, and I believe the fifth is Lonnie Walker IV.

Poeltl has been mixed up with plenty of run away from Dejounte with some Tyler Zeller next to Dejounte, but there has been a lot of overlap on Dejounte and LW4. Luka Samanic has also seen some time as a four with Dejounte, and Chimezie Metu looks to be ahead of Drew Eubanks based on his overlap with some key rotation players. If the Spurs are indeed sold on Gay as a backup PF, it’s possible they start The Other Luka or Lonnie in a smaller lineup. Keldon will likely be a backup to DeMar in the rotation when the Spurs do go smaller, and he’s shown at times he can score. Keldon and Loonie would see a bigger minutes uptick while White and Dejounte offer a much higher upside with increased per-minute output.

Back when LaMarcus was hurt, Pop was not afraid to go small with some Gay at the five, and the constant young-player buzz is hard to ignore given the Spurs’ location in the standings. Dejounte does have terrific splits with DeMar off the court (18/8/6 with 3.0 steals per 36 over 322 minutes), so he’ll have some big opportunities in smaller lineups. He was also shooting the ball well prior to the hiatus, too. Even when DeMar suits up, there will be plenty of usage available for guys like Walker, Keldon, White and maybe even fan-favorite Samanic.

2. Steve Clifford says he will “for sure” expand his rotation to 10-11 guys and it could get up to 12 players

In his pressers this month, Clifford has been one of the more secretive coaches out there, and this is really the only tip he’s dropped so far. He’s also routinely said how he doesn’t have high expectations for how teams will look right out of the gate compared to some in-season play. In practices, Terrence Ross has been running with Nikola Vucevic and Aaron Gordon way more than expected. With Jonathan Isaac (knee) and Al-Farouq Aminu (knee) out, the Magic have been mixing in B.J. Johnson and Vic Law to fill forward minutes. There hasn’t been too much of Evan Fournier in the workouts posted, but it’d be hard to imagine he would sit out after he criticized Davis Bertans for opting out (Fournier for sure in bubble, taking test here). Markelle Fultz was really starting to play well over his last 10 (13/3/7 in 29 minutes) with his midrange game coming together to go with high volume in the paint, and he’s ready to go now.

A 12-man rotation is no bueno, so the Magic will be tough to trust in DFS outside of Vooch, AG, Fournier, Ross and Fultz. Fournier was banged up back in March, which led to Gordon going nuclear over his last 11 with averages of 16.4 points, 9.1 boards, 7.0 dimes (!), 1.3 steals, 1.3 blocks and 1.1 treys (43.7 FD points). Gordon’s per-36 stats with/without Fournier prior to going nutso didn’t have much of a difference besides more scoring, so it’s possible he can sustain across-the-board output.

3. Coach Luke Walton said that Marvin Bagley is mainly being used at the five due to the limited time and the current need at the position. Walton says De’Aaron Fox has a “mid to moderate” ankle sprain.

Cue the AllenIversonPractice.GIF with Fox spraining his ankle in practice a second time this season with his first one costing him a whopping 17 games. The Kings really don’t have much to play for and Fox is likely looking for a contract extension, so there’s a chance he sits out to put Cory Joseph in as the starter (worked with starters on Wednesday and Thursday). The Kings at times were exploring Bogdan Bogdanovic as a primary ball-handler, and he sees significant increases on the stat sheet with Fox off the floor (20/4/5 per 36 without).

The Kings have also used Bogdan and Buddy Hield together without a PG (Fox, CoJo, Yogi Ferrell) for 59 minutes, and Buddy went bonkers with a per-36 line of 41.3 points, 8.5 boards, 6.7 dimes, 1.2 steals and 7.3 treys in that small sample.  The Kings also do not have an update on Harrison Barnes yet (COVID-19), which could put DaQuan Jeffries in the rotation or possibly some Harry Giles and/or Corey Brewer as a four. Moving to the bigs, Richaun Holmes may know how to handle his business in the post, but he doesn’t when it comes to PostMates. Besides Bagley, the Kings could try to use Corey Brewer as a five. Alex Len is finally in Orlando and should be out there after his quarantine. Bagley’s injury-plagued season will likely cause some minutes restrictions on him, so Holmes may still get run after his quarantine.

Fox possibly not suiting up creates some potential smash spots for Bogdan and Hield, assuming he’s over coronavirus. Plus, maybe CoJo can have some low-end value despite his history of lackluster per-minute output. Kent Bazemore’s position flexibility could help while Nemanja Bjelica should have a longer leash sans Harry B.

4. Frank Vogel said he expects several guys to pick up the slack with Rajon Rondo out in terms of secondary ballhandling, with Alex Caruso and Quinn Cook the most obvious, but he said he’s curious to see what Dion Waiters can do as well. We’ll also see Anthony Davis and Kyle Kuzma initiate offense.

Plenty of quotes to hit here, too. Quinn Cook also said he’s “very comfortable” running the second unit, and earlier this week Vogel said that Kentavious Caldwell-Pope should start for Avery Bradley. Vogel has routinely cited Alex Caruso’s net rating with LeBron James and Anthony Davis, which stands at a sterling +19.4 in their 229 minutes together.  Vogel did say the team’s “third option is the open man” and there really won’t be much upside when AD and LeBron are out there as those fellows flirt with 28-30+ usage rates on a given night. Kyle Kuzma has also been routinely quiet on the stat sheet in his AD-LeBron minutes, but he would certainly get a look if/when either guy is rested (they’ve expected to rest in at least scrimmages). If LeBron and AD are in great shape, it certainly makes sense to sit them out in multiple games with nothing to play for.

Besides Vogel saying LeBron is in “outstanding” shape (shocker, I know) and AD being healthy, trying to find value on the Lakers will depend on who hits shots. LeBron does have better per-minute output when Rondo and Bradley are not on the floor with a per-36 line of 28/8/12 over a big 754-minute sample.

5. Malcolm Brogdon said he hasn’t talked with coach Nate McMillan about how he’ll be eased back upon his return.

It wouldn’t be a big surprise to hear Brogdon gets his minutes managed after he just got over COVID-19, and his thigh/hip injury kept him out for a while. That means he’s likely not looking at minutes in the mid 30s perhaps at all, which opens up opportunity for Aaron Holiday, Justin Holiday and T.J. McConnell, especially if Victor Oladipo remains out. When next to Domantas Sabonis and Myles Turner, Aaron Holiday has decent numbers in a 76-minute sample without VO, Lamb and Brogdon with a 16/6/6 line per 36, and T.J. Warren does have a 24.0 usage rate in this split (75 minutes) and Sabonis also sits at 24.0 (88 minutes). McMillan also created some buzz with multiple comments about how well Myles Turner has played in Orlando.

It’s going to be tougher to rely on Brogdon until we get a clearer picture of their plan for him. McMillan loves Aaron Holiday’s defense and McConnell has shown he can put up some numbers in limited time, so choosing between those two will be something to consider every night — they will overlap when Brogdon sits, too. A lot of these guys don’t have high usage rates, so that’ll give Sabonis a higher nightly upside.