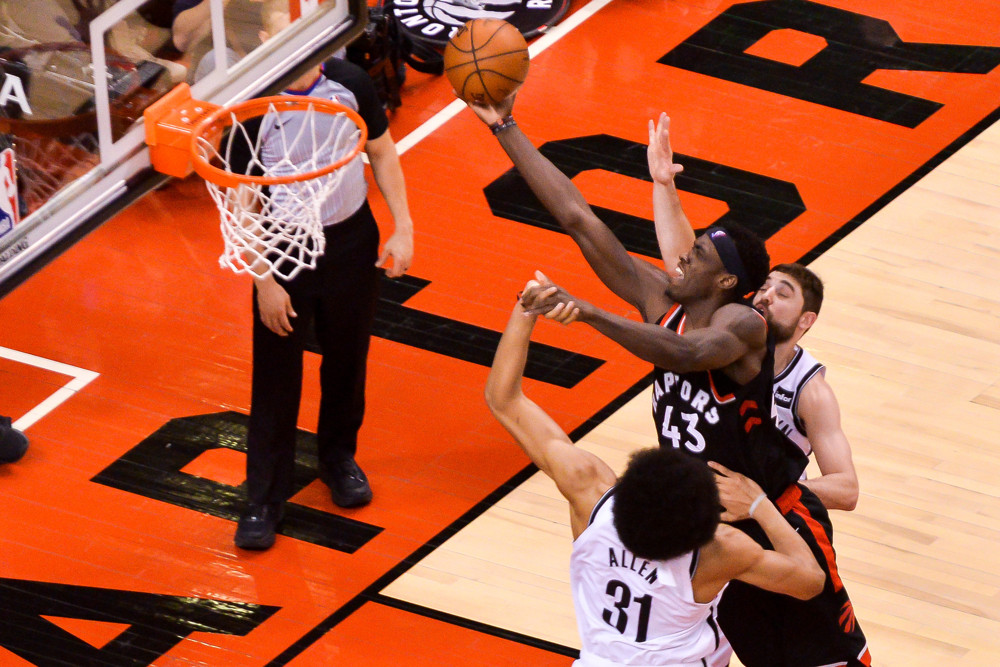 Today is the day. We get NBA action with four scrimmage games! We’ll be able to get a look at some lineup combinations coaches will explore, and can later apply it to how the minutes will break down during the DFS slates. The news will be flying going forward, and I’m really looking forward to breaking it all down when the games start on July 30.

Editor’s Note: If you haven’t yet, sign up for a subscription for Establish the Run NBA. Mike Gallagher will be setting you up with all the news to put you in the best position for players you’ll want to have in mind while Drew Dinkmeyer and Andrew Wiggins help you put together winning lineups.

1. Coach Nate McMillan says Domantas Sabonis (foot) is dealing with plantar fasciitis, and can’t put any weight on his foot.

McMillan added that he hasn’t put weight on his foot for 2-3 days and he’s very unlikely to play in any of the scrimmages. Bigs dealing with plantar fasciitis is not great, and you probably remember what happened with Clint Capela. Goga Bitadze also isn’t practicing, but he is expected to play in the scrimmages. The obvious takeaway here is that Myles Turner is potentially in a big spot. Per 36 without Sabonis, Turner sits at 20/10/2 with 2.6 blocks, which smashes his 11/7/2 line with 2.7 blocks with Sabonis. Turner has also got some Orlando buzz with McMillan saying Turner has “figured out where his offense is going to come from,” and he was even making adjustments with Sabonis. Plus, don’t forget Turner was kind of rolling prior to the shutdown (12.6 points, 8.6 boards, 0.8 steals, 3.9 blocks (!), 1.4 treys, 55.5 TS%, 16.4 USG%). Turner did take a knee to his calf and missed practice, but said he’s not concerned about it. The Pacers are also talking about playing T.J. Leaf at the five, which could open up a few extra minutes for Doug McDermott, and Justin Holiday should play some four in small-ball lineups with T.J. Warren as a four, too. McMillan said he likes the way Leaf looks as a five, and “he’ll get that opportunity.” Goga likely would soak up the minutes behind Turner once he’s up to speed. Sabonis is also third in the NBA in frontcourt touches per game (Jokic, Beal), so the entire flow of the offense will change to help out Malcolm Brogdon, Aaron Holiday, T.J. McConnell and T.J. Warren (don’t forget Brogdon’s minutes may not hit the 30-minute mark until the playoffs).

Turner gets a mixed bag of some great games (Wizards, Suns, Rockets), and some matchups that figure to be tougher for him (76ers, Lakers, Miami twice). On top of Turner’s outstanding splits sans Sabonis, Aaron Holiday (18/3/7) and Brogdon (22/7/8) have some very eye-catching splits without Sabonis and with Turner (281-minute sample on Brogdon, 233 on Holiday). Holiday is becoming even more attractive by the day.

2. Kyle Korver says he’s been “super impressed” with Khris Middleton and coach Mike Budenholzer said Middleton’s focus and professional approach over the hiatus were carrying over into the team’s five-on-five scrimmages at Walt Disney World over the past week.

One thing to add here is that the Bucks haven’t been very revealing on information from their accounts, and one of the best beat writers was on furlough until this week. With Middleton being in great shape (it shows in some videos and pictures), this should mean he won’t find his way to the Bud doghouse (never forget the MSG game), and his minutes should be extended along with Giannis Antetokounmpo. Middleton was absolutely rolling prior to the shutdown, averaging a 25/7/5 line on a 26.9 usage rate and team-high 62.7 TS% in that span. Last year for Giannis, he scored 1.71 FD points per minute in the regular season, but it did drop to 1.57 in the postseason. This year he upped it to a league-best 1.85, so even a similar decrease should be more than offset with what could be a bigger increase to his playing time (30.9 minutes this season).

The Bucks have a lot of questions in their rotation outside of Middleton and Giannis, especially with Eric Bledsoe (COVID-19) still not in Orlando. Of course, Brook Lopez is likely the next-best option, but there’s a chance Marvin Williams or even a small-ball lineup could help boost the minutes for some wings to keep Lopez from the 25-30 range for some matchups. The Bucks have a +16.6 net rating with Giannis on and no Lopez brothers in 406 minutes, and they have a +26.7 net rating with a Marvin-Giannis frontcourt in 49 minutes (no Lopez bros). We’ll get plenty more info on the Bucks to get a better feel for the minutes for Donte DiVincenzo, George Hill, Bud’s guy Kyle Korver, Wesley Matthews and Ersan Ilyasova in the coming days.

3. Nick Nurse said on Wednesday he went with a non-PG lineup in practice with Norman Powell and Pascal Siakam as the guards with Pascal doing most of the ball-handling.

This month, there’s been some buzz of the Raptors leaning more on Siakam on offense with Siakam saying he loves “ going through the struggles” of his progress as the lead option. Nurse also really talked up Siakam as a top option this week, saying the biggest positive has been he’s “been really good down the stretch, either making the shot or making the zip-out to somebody else who’s wide open to make the shot.” Back in the summer of 2018 when Nurse took over the head-coaching job from his assistant role working with the bigs, he really talked up throwing more at Siakam, which made him such an easy breakout pick for the 2018-19 season. He loves him, and don’t forget Siakam’s minutes increased to 37.1 in the postseason from just 31.8 in 2018-19. Nurse runs one of the tightest rotations in the NBA, so additional ball-handling chances for Siakam gives him a huge ceiling.

Moving to the Norm side, he’s been one of the deadliest transition perimeter players in the NBA, ranking ninth in the league in transition points per game with all big dogs ahead of him (Giannis, Westbrook, Harden, Siakam, Beal, LeBron, Lowry, Booker). He also led every guard qualifier in the league in 2P% at 58.9%, and he was cooking in his last five full games (22/4/2, 1.9 steals, 39.2 minutes, 65.9 TS%, 24.4 usage rate). This move to give him more ball-handling responsibility could mean that Nurse is going to be really tight in the playoffs, and it’s not crazy to think he’ll run seven deep in many games (Lowry, FVV, OG, Siakam, Norm, Serge, Gasol).

The Raptors are going to be one of the most attractive teams to target in DFS, and Nurse has mentioned he has to check himself on going galaxy brain on lineups. Regardless, it’s clear Siakam getting huge volume each possession to go with minutes close to 40 could make him a monster. Plus, OG and Norm can definitely co-exist, and it’ll be interesting to see how teams defend them with teams likely to put smaller defenders on OG.

4. The Grizzlies announced Justise Winslow will not play in Orlando due to a hip injury.

Ugh. Winslow was likely going to get some second-unit ball-handling chances with some overlap next to Ja Morant, but now the Grizzlies are back to square one with their perimeter options. The loss of Winslow should solidify Dillon Brooks’ minutes as a combo wing while it may be matchup-based on starting De’Anthony Melton or Kyle Anderson next to him. Grayson Allen may even crack the rotation now, and perhaps Josh Jackson can find a role even with most of the frontcourt healthy.

A lot going on around the league with injuries, so let’s just circle back on some of the news we’ve covered in the previous editions, and add some quotes from the last two days.

Coach Brett Brown said on Tuesday that Joel Embiid and Al Horford have yet to play together in Orlando practices.

As stated in two previous editions, Al Horford’s playing time is just not going to be there when Embiid is active. Maybe that’ll change if they get to face the Bucks, but big yikes for Big Al.

It sounds like it’s a crisis averted here for Fox, which lowers the upside for Bogdan Bogdanovic and Buddy Hield.

Jakob Poeltl also mentioned Keldon Johnson as a standout Orlando player, and DeMar DeRozan confirmed his “goal here is to get these young guys ready” in Orlando.

The Spurs youth movement has been one of the biggest stories from a DFS standpoint. If you’ve missed previous editions and/or pods, expect some more Lonnie Walker IV, Keldon, Derrick White and even Quinndary Weatherspoon to help out Dejounte on the perimeter. It’s also worth a mention Drew Eubanks has been getting more reps in practice lately based on the videos put out from the Spurs account. Poeltl also mentioned him and Chimezie Metu as guys who are impressive, but players often prop up guys in similar positions.

Patrick Beverley left Orlando on Tuesday night and tweeted out a sad emoji Wednesday morning. He is expected to return to the bubble.

First and foremost, all the best to Pat-Bev. The Clippers did tweet out a video with Terance Mann in the backcourt next to Kawhi Leonard and Paul George, so he might be an option to fill in for Pat-Bev while Reggie Jackson helps out in the second unit (Landry Shamet not at practice yet). Coach Doc Rivers also mentioned Mann as a standout in Orlando.

Russell Westbrook practiced on Wednesday and said his only COVID-19 symptom was a stuffy nose.

This is great to see, and perhaps Westbrook can get up to speed sooner than expected.

Justin Anderson said Jacque Vaughn told him he needs to be able to play 3-5.

You’re obviously not playing Anderson in most situations, but the takeaway here is that we should be a little nervous about how many minutes Donta Hall will get behind Jarrett Allen. Rodions Kurucs and Timothe Luwawu-Cabarrot have also talked about playing the five.