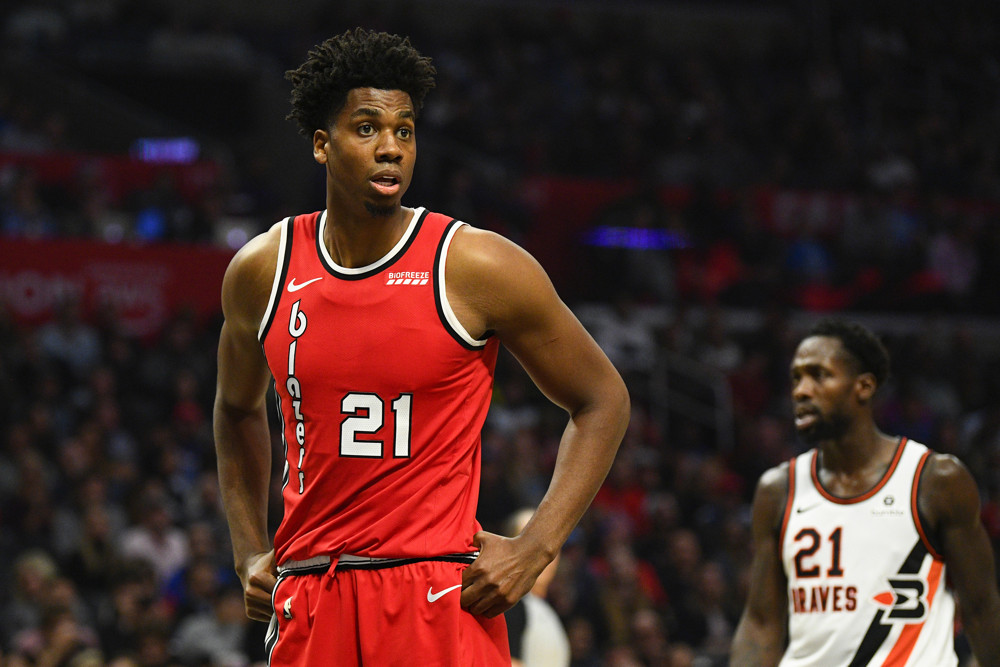 The NBA is back! We had 16 teams in action already, and there is a whole lot to digest on rotations and overall style for teams. Let’s get to some of the comments in the last couple days about all the action.

1. Coach Scott Brooks said Troy Brown had a “really solid game on Wednesday” and added “a couple of passes he made were really good.” Brown adds his confidence is “sky high right now.”

Brown was one of the clearest winners from Wednesday’s action, getting constant play-making opportunities in halfcourt sets that were clearly “his” plays as a ball-handler. On top of being a plus rebounder, Brown has shown some flashes as a secondary ball-handler and played point guard growing up. “Passing hasn’t really been something that’s been uncomfortable for me,” Brown said. Brooks also mentioned that the game is starting to slow down for him, the team is still working with him on deciding to pass or shoot, and it sounds like they’re trying to throw more at him as a primary option. Ish Smith and Shabazz Napier aren’t exactly ball-dominant guys, so Brown could really set up the halfcourt offense after the Wizards give up (several) makes on the defensive end.

The Wizards have a lot of low-usage players and have to fill in for the NBA’s usage-rate leader in 2020, Bradley Beal. Brown ran some of those patented dribble-hand-off plays and was looking for his teammates as roll man and along the 3-point line — Beal also is second in the league in frontcourt touches per game (Jokic). At this point, we’re almost rooting for Brown to shoot poorly in the scrimmages to take some eyeballs off him heading into the DFS slates.

2. Scott Brooks, Troy Brown and Mo Wagner all said Isaac Bonga has stood out the most at Disney so far.

Bonga got the start on Wednesday, but didn’t do much with his 22 minutes (5/1/3 with one steal, one block). In the first half, he stuck as a wing, but in the second half the Wizards went smaller to put Bonga at the four in some lineups. As great as all this sounds, Bonga still somehow only had a 10.5 usage rate in his 355 minutes without Bradley Beal (11/6/2 line per 36).

Besides the possible bad news coming for Jerome Robinson, the other big takeaway here is that the Wizards are putting another lower-usage player out there. Although, there’s still some time for things to change and I’d bet the Wizards do throw Robinson out there as a starter in one of the next two games. Bonga locking up the job would be good news for Rui Hachimura, Brown and the point guards. Before we move off our favorite team in this column, Ish Smith and Shabazz Napier did play 2.4 minutes next to each other on Wednesday. We’ll be watching that closely.

3. Coach Jacque Vaughn said on Wednesday that the Nets “actually talked about trying to reward” Jarrett Allen. Garrett Temple also mentioned Rodions Kurucs is going to play a lot of five for the Nets.

Allen did only have a 14.5 usage rate on Wednesday in a game the Nets had no paint presence against the Pelicans at just 28 paint points (14-of-28 shooting). The Nets are going to have to produce offense from somewhere, and maybe they can get the ball to Allen more off screens. Former coach Kenny Atkinson lived off the 1-5 pick-and-roll play to initiate his offense, so maybe Vaughn can get some of that going. Meanwhile, the other big takeaway is that the Nets could be a disaster on defense. Only one scrimmage, but Allen had a 130.6 defensive rating in his 23 minutes against the Pelicans. Moving to Temple’s comments on Kurucs, it sounds like it’s possible he does continue to come off the bench, and the Nets did talk up Timothe Luwawu-Cabarrot. “The looks from TLC were great,” Vaughn said. “We totally believe those shots will drop down for us.” TLC was second on the Nets in shots with 10 of them (six treys), but was fifth in usage rate. After Caris LeVert’s 33.3, it was a mild surprise to see Kurucs as the No. 2 usage rate man at 25.0.

We still have to see how Jamal Crawford and Tyler Johnson are put in the mix here (if you missed it, the Nets were talking about bringing them along slowly). The Nets are going to be a team to consider every night they’re on the slate, and after the LeVert chalk it was a good start for Kurucs, Chris Chiozza, TLC and Jeremiah Martin.

4. After Hassan Whiteside was ruled out for Thursday, coach Terry Stotts said he had “every intention” of starting Hassan Whiteside and Jusuf Nurkic together, and he’d like to see Nurk and Whiteside starting against the Grizzlies on Sunday.

We’ve hit this one in a previous QUAN, but just wanted to follow up here with Stotts’ comments. The Blazers did go with Zach Collins, Carmelo Anthony and Nurk in their frontcourt against a depleted group of Pacers bigs. We’ll obviously keep an eye on that, but it’s worth noting there’s some debate on Zach Collins from one of their better beat writers and their official team beat writer (both are outstanding follows). Most NBA people would think that starting Melo at the three is just asking for trouble, so starting Gary Trent Jr. makes a lot of sense over Collins. After a lot of buzz this week, Trent Jr. looked as advertised on Thursday. Still, it feels like Collins is the favorite based on the comments from the team.

5. Victor Oladipo says “we’ll see” on his status for the seeding games. “I’m reassessing my body and knee after every game and will go from there,” he said.

Oladipo played 19 minutes on Thursday (8/6/1 line), and it’s still far from a lock he’ll play in most of the real games, especially with the Domantas Sabonis injury. With Malcolm Brogdon likely to be limited, this is setting up very well for Aaron Holiday, T.J. McConnell, T.J. Warren and maybe even Justin Holiday.

6. Coach Monty Williams said he wants Deandre Ayton to shoot 3-pointers if the defenders sag off him.

He did it. He made a 3-pointer on Thursday! This isn’t exactly a huge item to put in the forefront of your mind for DFS, but just wanted to throw it out there. The Suns were also using Ayton more in the high post on Thursday, and this play they ran on their second possession was another indication the Suns could try to expand his game. Side note: Mikal Bridges buzz looked legit after Thursday.

7. Giannis Antetokounmpo said he felt like he was tired, and he wants to “run down the court for 35 minutes, 40 minutes and not get tired.”

We talked a little bit about Giannis in the last edition, but this quote definitely caught my eye. The league’s top per-minute FD producer getting that volume doesn’t seem fair, and that is probably a very high, almost unattainable goal for Antetokounmpo. He almost plays too hard for that kind of volume.

8. Coach Rick Carlisle said Boban Marjanovic is “very much in the mix” and the Mavs will “have to take advantage of what he does.”

DFS can’t quit Boban, and we’re totally going to fall for the BOBANa in the tailpipe, aren’t we? “There’s going to be some unusual matchups on both sides of the ball, but we’re going to have to take advantage of his size on the offensive end and find creative ways to cover him defensive,” Carlisle added. Everyone’s favorite big man went off for 17 points, 13 boards, two dimes, two steals, one block and one 3-pointer in 24 minutes. Plus, don’t forget he went off for 31 and 17 in 31 minutes against the Nuggets on the night of the NBA shutdown on Mar. 11.

The Mavs are very likely to start Kristaps Porzingis at the five regardless of matchup, and it’s noteworthy that Maxi Kleber played 12.0 of his 13.2 minutes next to Boban on Thursday. He’s likely going to get some DNP-CDs here and there, but it’ll be really hard to ignore Boban on nights KP will be rested — hello, Aug. 11 in a back-to-back against the Blazers. The Mavs replacing Willie Cauley-Stein with Trey Burke does give some optimism.

More Mavs: We talked about them last week (link here), but their offense on Thursday was just insane. KP has a Disney-high 170.0 offensive rating with four of the five Mavs in the top five (Jimmy Butler the exception). Carlisle interestingly put Tim Hardaway Jr. on Anthony Davis to start the game, so using Dorian Finney-Smith elsewhere could be something to watch for potential areas to attack in DFS going forward. As mentioned last week, the Mavs had a 121.1 O rating with KP as the lone PF/C, so they could really have some shootouts in their games going forward.

As mentioned on the Thursday pod, the Heat offensive system caught my eye. They took a whopping 44 treys in 40 minutes (works out to 52.8 in a 48-minute game), and Jimmy Butler had the second-fastest pace of the day at 114.4 (min of 10 minutes played). Coach Erik Spoelstra mentioned how it was “pretty close to what we had designed in terms of minutes and getting guys playing together,” so we’ll see if the Heat chuck ‘em up against the Jazz on Saturday. Miami was first in the NBA for 3P%, so obviously more of those shots would be outstanding news for Duncan Robinson, who was making five a night over his last 15.