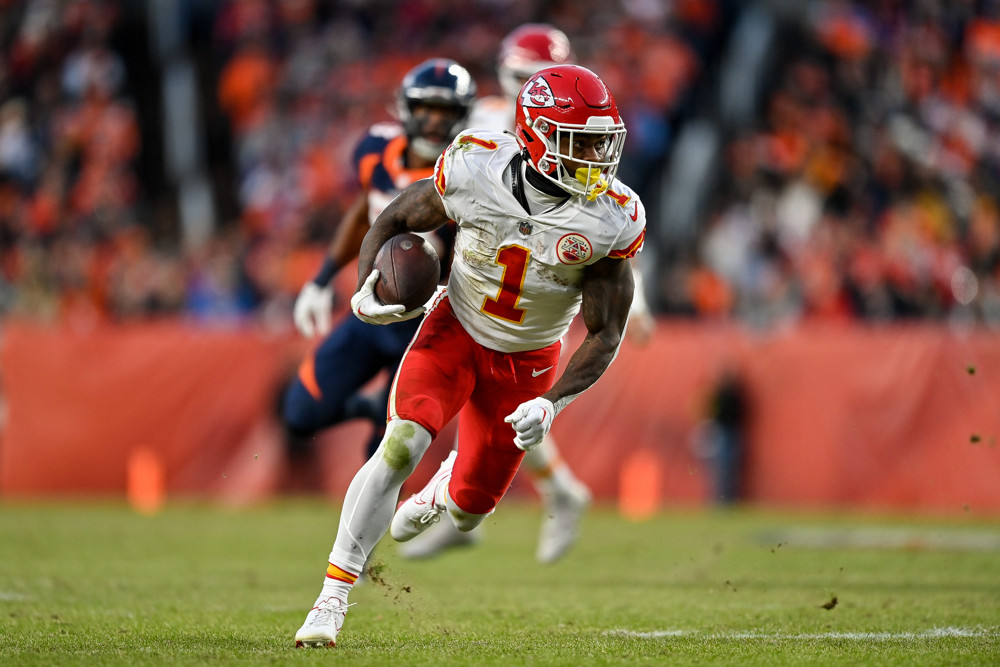 The NFL regular season is over. We’re onto the playoffs — but that doesn’t mean it’s time to stop playing fantasy football. Many fantasy platforms offer playoff challenges, and there’s a massive edge for fantasy players willing to put in the time because most of the industry is so focused on standard season-long formats. With that being said, there’s no one-size-fits-all approach to these tournaments because they all have such unique rulesets and lineup requirements. ETR’s Justin Herzig has already written a stellar article explaining how you should attack playoff best ball drafts on Underdog. Today, we’ll go in a different direction and hone in on the FFPC Playoff Challenge, perhaps the most well-known playoff fantasy tournament around.

HOW DOES THE FFPC PLAYOFF CHALLENGE WORK?

There is no draft or salary cap for the FFPC Playoff Challenge. You simply pick from a pool consisting of every player in the NFL playoffs to fill the following 12 roster spots:

There is no changing your team once the contest starts. Rosters lock when the ball is kicked in the first Wild Card game. Whichever team has the most total points when the clock hits zero on Feb. 12 wins the grand prize. But here’s the big catch: You can only pick one player per team. That means if you pick Patrick Mahomes, you cannot also pick Travis Kelce. With 14 NFL playoff teams and only 12 roster spots, each entry will have two NFL teams not represented on their FFPC squad.

The FFPC Playoff Challenge costs $200 to enter and boasts a $500,000 prize to first place with more than $1.4 million in the overall prize pool. For more info on how the contest works, check out the FFPC website.

Now that we’re familiar with the settings, let’s get into some tips and tricks on how to attack this format. For this exercise, we’ll be using FFPC Playoff Challenge data from the past two postseasons, although it’s critical to realize that’s an extremely small sample size. With that in mind, we’ll also utilize logic similar to popular DFS game theory to formulate optimal strategy. Let’s get right to it.

EXAMINING PAST OWNERSHIP TO INFORM STRATEGY

Like in DFS, the key to the FFPC Playoff Challenge is deciphering where you can find leverage. The process for projecting ownership isn’t quite as advanced as it is for DFS, but we can lean on ownership in past years to predict what the field is going to do. Let’s start by looking at last year’s ownership.

As you can see, the field latches strongly onto the best players on the best teams. This makes sense — these players are both likely to score a lot of points and play a lot of games in the playoffs — but there’s also a point when it becomes +EV to fade them, especially when there are other high-scoring options on their own team. For example, Davante Adams was 76.8% owned last year after finishing as the WR2 on a Packers team that finished atop the NFC. Meanwhile, Aaron Jones finished as the RB9 (although he admittedly scored significantly fewer points per game than Adams during the fantasy regular season) and was only on 7.0% of teams. Green Bay lost their first playoff game; Jones scored 26.0 points in that game vs. 18.0 for Adams. Similarly, Derrick Henry and A.J. Brown both slogged through injury-plagued campaigns, but Henry came in at twice the ownership. Brown outscored Henry 25.2 to 12.2 in the playoffs.

These leverage points obviously look better in hindsight and Adams and Henry were likely to lead their respective teams in fantasy scoring, but the point remains that the field is sometimes overconfident in some spots. With that being said, there’s a fine line between gaining leverage and being overly contrarian. For example, Jones realistically had a chance to outscore Adams throughout the playoffs. Taking someone like Allen Lazard as your Packer representative would’ve been getting too cute considering the Packers looked like perhaps the most likely team to survive the NFC.

We see the same occurrences with data from two years ago. The Henry vs. Brown case works there too, as Henry boasted the second-highest ownership at 71.4%. Brown was way down at 18.4%, but he outscored Henry in the postseason 20.3 to 8.1.

The field may also be overconfident in certain game outcomes. Example: Two years ago, Cam Akers was only on 10.6% of teams. The Rams’ defense was on a staggering 43.0% of teams. In other words, the field was expecting the Rams to lose in the first round, even though they were only 3-point underdogs to the Seahawks. Los Angeles prevailed 30-20 before losing in Round 2, and Akers was the 10th-highest-scoring player in the entire playoffs.

You shouldn’t blindly fade the chalk, but you have to try to differentiate in a couple of spots to give yourself a real chance at the top prize. It’s difficult to create a truly optimal roster without strong ownership projections, but staying on top of market sentiment and researching leverage opportunities is critical if you want to avoid drawing dead. We offer rest-of-playoff fantasy scoring projections so you can see our expectations for how the postseason plays out. From there, you can simply think through which players are likely to be highly owned and pinpoint viable pivots.

FIGURING OUT WHICH TEAMS TO FADE

With 14 teams in the postseason and only 12 players per roster, each entry in the FFPC Playoff Challenge is hard-fading two NFL teams. Everyone also has a defense and kicker, which is essentially two other teams you’re fading because D/ST and K are extremely unlikely to be their team’s highest-scoring player over a multiple-game stretch.

Case in point: Last year, the six teams that lost in Round 1 were Dallas, Arizona, Philadelphia, Las Vegas, New England, and Pittsburgh. 82.9% of the field used one of those teams as their D/ST compared to 92% of top-50 teams and 94% of top-100 teams. 86.3% of the field had a kicker from one of those teams vs. 94% of top-50 and top-100 teams. It’s not a death sentence if your D/ST and K win a game, but you certainly want to try to pick losing teams for those spots so that your higher-scoring positions play more games.

This knowledge alone isn’t enough to gain an edge because, frankly, it’s intuitive that we want to avoid players on teams that get bounced early. The trickier part is determining which teams to fade, but Michael Leone has put together an expected playoff games metric for each team. You can also rely on Vegas odds (money lines) to quantify each team’s chances of advancing past the first round. We don’t know exactly what the field will do, but we do know we absolutely have to get our fades (the two unrepresented teams, D/ST, and K) correct to make a run for the grand prize.

For this year specifically, let’s look at some teams that are unlikely to advance past the first round:

The Giants, Buccaneers, and Jaguars are also underdogs in their first game, but the spread is at most +3 in those games right now (Jags are +1). Regardless, these teams all make sense as potential fades, or as D/ST or K spots.

With that being said, these squads also provide potential leverage, as highlighted by the Akers situation outlined in the previous section. In 2021, 85.5% of teams (5,337) had a Rams player. 3,736 of those teams were Rams D/ST or Matt Gay. That means just 25.6% of the field had a Rams skill player, providing you with a huge leverage opportunity if they exceeded market expectations (especially if you had Akers). Los Angeles was an alright fade given they were 3-point underdogs in the first round, but this is merely an example of how you can also get contrarian by including a player on a team the field is harshly fading. You don’t want to load your team up with low-probability outcomes, but you do need to get unique in some spots and this is one way to do so if you think the field will overcorrect for a team being an underdog.

OPTIMAL USE OF FLEX SPOTS

With four flex spots, roster construction is also a pivotal part of creating a viable team in this contest — especially since the FFPC format gives tight ends 1.5 points per reception. A one-year sample isn’t really enough to say anything definitively about optimal flex usage, but it’s still interesting to look at last year’s data.

In 2022, the best teams leaned harder on WRs in the flex spots and less on RBs and TEs. This is partly because the teams that advanced furthest didn’t have stud running backs, but WRs do have a wider weekly range of outcomes, which is beneficial in a contest where we are trying to maximize our chances of finishing in first place (because of the top-heavy payout structure). As such, it’s likely +EV to focus on wide receivers for your four flex spots (though that does not mean you absolutely must have six WRs).

Below, we’ll briefly run through what we view as the optimal play on each team along with a leverage option. Note that there are multiple viable leverage plays for some of these teams, but we tried to pick one for each.