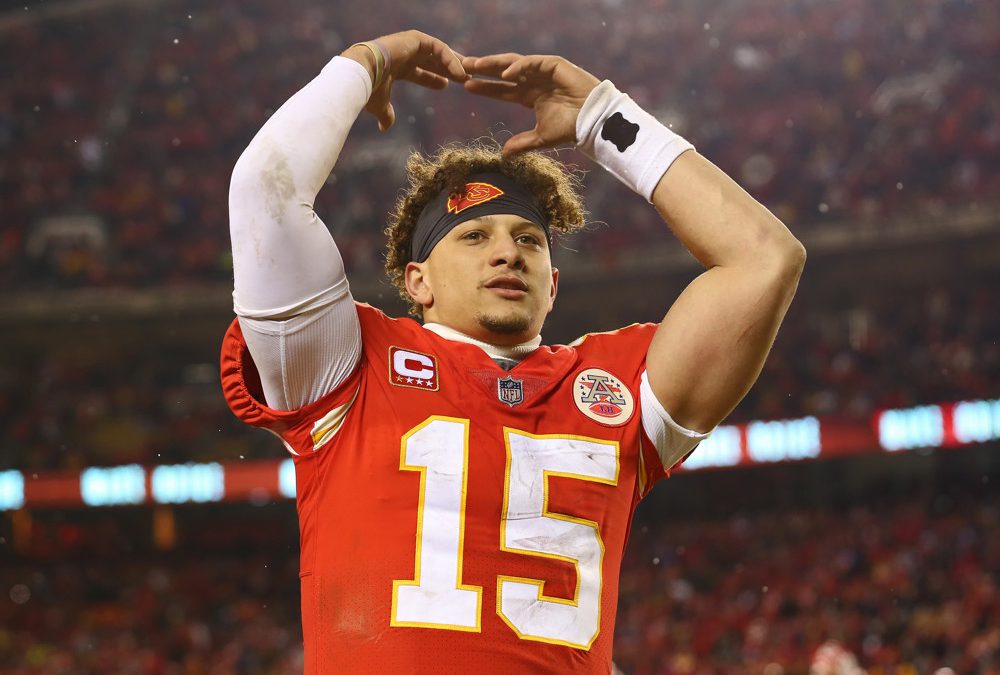 In his debut year as an NFL starter, Patrick Mahomes joined Peyton Manning and Tom Brady as the league’s only-ever quarterbacks to pass for 50 touchdowns in a single season, earning NFL Offensive Player of the Year and MVP while leading the league in the critical metrics of touchdown rate (8.6%), adjusted yards per attempt (9.6), and QBR (82.0). Performance when kept clean is the stickiest year-over-year quarterback metric, and Mahomes led the NFL in passer rating from a clean pocket (134.2). Regression will be the theme of Mahomes’ 2019 outlook, and it already began to some extent last season. Including playoffs, Mahomes’ per-game yardage and touchdown averages regressed from 326.9 and 3.58 in Kansas City’s initial 12 games to 291.2 and 2.17 over the final six. Mahomes remains neck and neck with Deshaun Watson as my overall QB1, especially after Tyreek Hill avoided a suspension.

Tyreek Hill escaped discipline for alleged child abuse, vaulting from my offseason WR18 to WR5 behind Davante Adams, DeAndre Hopkins, Odell Beckham, and Julio Jones. Last year’s overall WR1 in both PPR and non-PPR scoring, Hill ranked top three among 96 qualified wideouts in yards per route run (2.54) and sixth in the NFL in Air Yards (1,898) despite finishing 13thin targets (137), propelled by an aggressive 14.4-yard aDOT and Mahomes’ cannon arm. More sneakily, Tyreek pads his box-score stats by averaging 1.3 career rushing attempts per game and dominating on interior routes, where he led the league in receiving yards from the slot (857) and scored nine of his 12 touchdowns last season. Hill’s floor is safe with the NFL’s most-talented passer quarterbacking Andy Reid’s pass-oriented scheme, and his ceiling is just as lofty as any of the four receivers ranked ahead of him. Hill is a first-round fantasy pick.

Sammy Watkins began his first Chiefs season relatively hot with 14 receptions for 176 yards and a touchdown in Kansas City’s opening three games, only to miss most of Week 4 with a hamstring injury, sit out Week 10 with a foot sprain, aggravate the foot injury in Week 11, and miss the rest of the regular season. Healthy for Kansas City’s two postseason games, Watkins delivered stat lines of 6/62/0 and 4/114/0 against the Colts and Patriots, drawing eight targets in each. All told with playoffs included, Watkins’ 16-game pace was 78/1,106/5, which would have made Watkins last year’s PPR WR18. Watkins hasn’t reached 600 yards in a season since 2015 and remains a colossal injury risk, but his upside is tangible in such a fantasy-friendly environment. On a Chiefs team missing the NFL’s 11th-most targets from last year’s team, Watkins is a boom-bust WR3/4 pick with a WR2 ceiling.

Held back for years by Alex Smith’s timid style of play, Travis Kelce finally reached the Gronkian heights of which he was long capable with Mahomes, setting career highs in targets (150), catches (103), yards (1,336), and touchdowns (10) despite finishing below his career averages in yards per target and catch rate. Kelce outscored non-PPR runner-up George Kittle by 1.3 points per game and No. 2 PPR tight end Zach Ertz by 1.1 PPG. Although Mahomes may experience some touchdown regression, Reid’s offense is among the NFL’s most bankable after finishing No. 6 in scoring with Smith in 2017 and No. 1 last year while bringing back an unintimidating defense that will force the Chiefs into pass-reliant situations. Kelce has missed one game in the last half decade – Week 17 in 2017 when Kansas City rested starters – and has finished as a top-two TE1 in three straight years. He’s a legitimate first-round fantasy consideration.

Demarcus Robinson and Mecole Hardman are the top candidates for Kansas City’s third-receiver job, held last year by Chris Conley, who played 75% of the Chiefs’ offensive snaps but operated largely as a decoy and blocker with just 52 targets in 16 games despite Watkins’ absence from six and most of two others. Mainly a possession receiver with run-after catch skills, Robinson has a big head start entering his fourth season in Reid’s offense. The Chiefs traded up to draft 4.33 burner Hardman with the 56thoverall pick after he managed 59 career receptions in Georgia’s run-dominant offense but averaged 16.1 yards per catch and 15.2 yards per punt return over his final two years, showing elite ability with the ball in his hands. Hardman reminded me of 49ers lid-lifter Marquise Goodwin based on his college tape.

Damien Williams accepted a team-friendly, two-year, $5.1 million extension last December and is expected to return as Kansas City’s feature back after going post-Kareem Hunt nuclear for averages of 17.5 touches, 100.3 yards, and 4.7 receptions with ten all-purpose touchdowns over the Chiefs’ final six games, playoffs included. Williams’ primary red flag is his limited track record. He was a timeshare back for most of his career at Oklahoma and has never topped 50 carries in an individual year entering his sixth NFL season. Williams also pulled his hamstring early in training camp. Williams is big (5’11/222), fast (4.45), and an excellent receiver, however, and there is no fantasy-friendlier environment than an Andy Reid-coached offense quarterbacked by the league’s most-dominant passer. Upside seekers should be willing to take Williams at or just before the second-/third-round turn in season-long leagues.

Carlos Hyde, Darwin Thompson, and Darrel Williams round out Kansas City’s backfield as low-cost sleepers behind an unproven starter. On his fourth team in two seasons, Hyde settled for a one-year, $2.8 million contract to add a power-back dimension in K.C. but has managed 3.66 yards per carry over the last two seasons and never added much in the passing game. He ranked a lowly 42ndamong 47 qualified backs in Football Outsiders’ 2018 rushing Success Rate. I’m still much higher on Hyde than consensus based on Williams’ unimpressive resume and my willingness to take mid- and late-round shots on pretty much any member of Kansas City’s high-octane attack. The Chiefs are missing the NFL’s third-most carries (235) from last year’s team. Albeit against lame Mountain West competition, sixth-round pick Thompson led the conference in yards after contact per carry (5.07) and averaged 6.8 yards per rush with 15.3 yards per catch, reminding me of Dion Lewis on college film as an undersized (5’8/200) but high-energy slasher with plus versatility. The latter Williams was a 2018 afterthought even after the Chiefs lost Hunt but remains worth monitoring with a year in the offense under his belt.

The Chiefs’ 2019 win projection is 10.5 games, a number they’ve topped in three of the last four years and 4-of-6 seasons with Andy Reid as coach. Last year’s club outkicked its Pythagorean Win Expectation by 1.3 games to finish 12-4 but weren’t significant overachievers in other metrics, such as going a just-above-par 5-4 in one-score affairs and finishing with a dominant +144 point differential. This year’s team draws the NFL’s seventh-hardest schedule based on Opponent Win Totals but made critical acquisitions in DE Frank Clark and FS Tyrann Mathieu, and gets WR Sammy Watkins and RG Laurent Duvernay-Tardif back from injury-plagued years. My concerns with the 2019 Chiefs involve depth and scheme change under new DC Steve Spagnuolo, whose recent track record is spotty at best. Nevertheless, I’m picking Kansas City to win 11-12 games on the back of the most-valuable player in the sport.