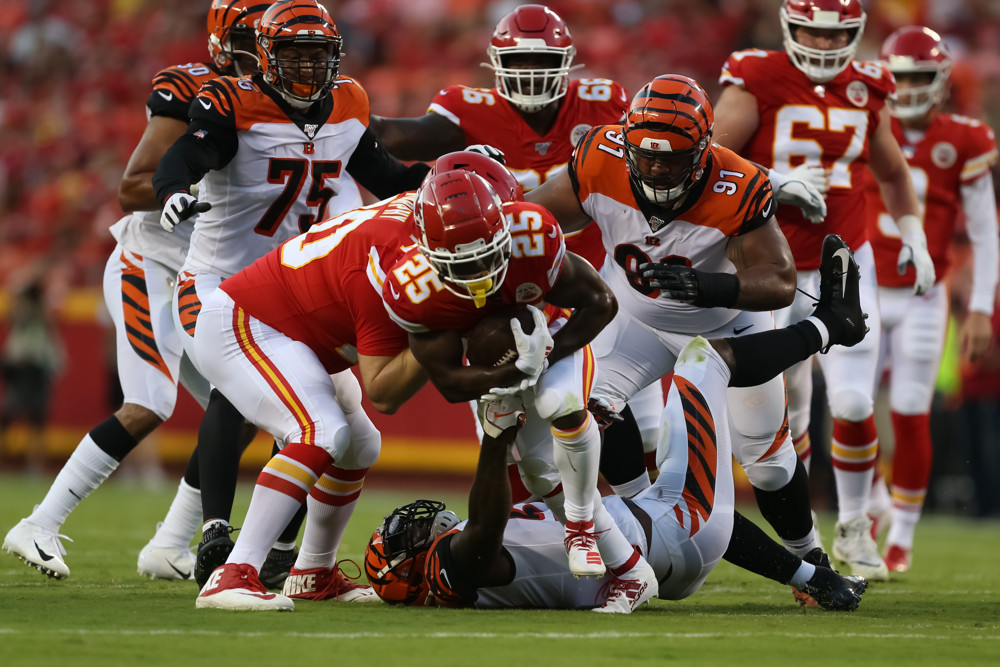 Season-long leagues are not won with median projection performances from late-round fliers. If their median expectation was difference-making, they wouldn’t be going in the 10th round or later. The more optimal way to go about these late-round picks is prioritizing ceiling and ensuring early-season reveals.

In other words, we want players with a chance to become weekly starters for us and we also want to know early. That way, we won’t have any remorse about attacking the waiver wire hard in Weeks 1-4, when league-winning additions can be made.

With those thoughts in mind, here are my favorite targets with an Average Draft Position (ADP) of 120.0 of later. I used DRAFT ADP as of August 20 since they are real-money and therefore likeliest to reflect what you will see in your own competitive drafts.

1. Jordan Reed, TE, Redskins – ADP 120.6
Reed was not himself last year as he fought through severe pain in both of his toes. During the offseason he had them repaired and the reports out of Redskins camp can’t be more glowing. Reed has reportedly regained his explosiveness and multiple beat writers named him the MVP of training camp. This team has arguably the worst set of wideouts in the league, pushing target share toward Reed. They also are one of the worst overall teams in the league, setting Reed up for plenty of mid-range looks against prevent defense. Of course Reed’s health is a massive concern, but that’s why he’s available so late.
UPDATE: Jordan Reed sustained a concussion in the third preseason game. It’s unclear if he’ll be healthy to start Week 1, but the Redskins are optimistic. Regardless, he now comes with even more injury risk.

2. Mitchell Trubisky, QB, Bears – ADP 135.6
I prefer Cam Newton (ADP 94.9), Jameis Winston (104.8), Lamar Jackson (112.1) or Russell Wilson (114.8) when taking the optimal approach of waiting on a quarterback. But they’re all going before my 120.0 ADP threshold for this “Flier” range. What we do know about Mitchell Trubisky is that he has the upside in him. Trubisky went over 31 DraftKings points four times last season, an huge number. For context, Patrick Mahomes only went over that number five times. This season, an inevitable regression in the Bears’ turnover rate combined with a tougher schedule will lead to more even more potential shootouts. Trubisky has also removed one-dimensional Jordan Howard and added two strong pass-game backs in David Montgomery/Mike Davis.

3. John Brown, WR, Bills – ADP 136.1
This should be Robert Foster’s spot. But instead the Bills decided to sign a redundant skill set in Brown and turn him into Foster’s mentor. Now it’s Brown who is operating as the every-down, No. 1 vertical receiver for Josh Allen while Foster is buried with the backups. Of course, the reason Brown has weekly upside is the same reason that Foster did late last year. Allen is a schoolyard style who runs around like wild and chucks it deep. He led the entire NFL in average depth of target last season at 11.5 yards. That fits perfectly with Brown’s best skill as he was 4th among all pass-catchers in yards per reception last year.

4. Justice Hill, RB, Ravens – ADP 142.7
The Ravens will almost certainly lead the NFL in total rush attempts and are a strong candidate to also lead the NFL in RB rush attempts. In Lamar Jackson’s seven regular season starts last season, they averaged a massive 27.6 RB rush attempts per game. So even Mark Ingram is able to keep a stranglehold on the No. 1 RB job, there’s still plenty of meat on the bone here. Kenneth Dixon is likely to be cut and Gus Edwards is a one-dimensional plodder. As noted by our Pat Thorman, the wildly athletic Justice Hill (4.40 forty, 40-inch vertical) forced nine missed tackles on 12 touches in preseason Week 2. Ingram hasn’t forced nine missed tackles in a full game in nearly five years.

5. Jamison Crowder, WR, Jets – ADP 145.4
Sam Darnold has played 23 snaps so far this preseason and Crowder has been on the field for 21 of them – including 16 from the slot. The Jets have also played fast, going no-huddle on 48% of the Darnold snaps. We know that Gase offenses have a history of high-volume slot roles, most notably in the form of Wes Welker (Denver) and Jarvis Landry (Miami). Crowder stands to benefit from the expected Year 2 Darnold leap.

6. Tony Pollard, RB, Cowboys – ADP 146.7
Of course Tony Pollard is a total smash if Ezekiel Elliott’s holdout bleeds into the regular season. Pollard was in on 13-of-13 first-team snaps in the second preseason game and dominated. But even if/when Zeke does return to the Cowboys, it’s quite possible Pollard maintains a role. He’s flashed Kamara-like ability that has Jerry Jones and friends excited. If Zeke signs before your draft, Pollard is still worth a pick in the flier range.

7. Chris Herndon, TE, Jets – ADP 155.8
Yes, Herndon is suspended for the first four weeks. But he’s been in on all 23 of Sam Darnold’s snaps this preseason on the heels of a quietly strong rookie year. First-year tight ends simply rarely produce, yet Herndon was able to finish 10th in yards per route run at the position and posted a 39-502-4 line. If we punt at tight end, Herndon fits well as a bench stash behind injury-prone vets like Jordan Reed or Tyler Eifert.

8. Darwin Thompson, RB, Chiefs – ADP 159.3
Carlos Hyde has been replaced by LeSean McCoy. That’s an upgrade, especially given Andy Reid’s history with McCoy. So now Thompson is blocked by not only “starter” Damien Williams but also Shady. That will tank his ADP even though Darwin has looked electric in preseason action, getting to the edge with ease for a 9-52-1 line and adding a 29-yard touchdown reception. Remember Damien Williams is attempting to carry a featured workload for the first time in his career at age 27 and McCoy is 32 years old. It’s still worth taking a flier on Darwin and seeing how the usage/injuries shake out early in the season.

9. Darren Waller, TE, Raiders – ADP 177.5
Jon Gruden has been heaping praise on Darren Waller for literally six months now. The Raiders let Jared Cook walk in free agency, passed on taking a tight end in the draft and are using Waller as an every-down player in their offense. This isn’t some stiff veteran – Waller was a wideout in college, ran a 4.46 at 6’6/238 and posted a 37-inch vertical. His catch radius and long speed at his size is outrageous. With Antonio Brown and Tyrell Williams on the outside, the middle of the field is wide open for Waller opportunity.

10. Dare Ogunbowale, RB, Bucs — ADP 213.5
Ogunbowale has showed out this preseason and is now considered a lock to make the final 53-man roster. That’s exciting because he’ll slide right in as the No. 3 guy on the worst RB depth chart in the league. Ogunbowale has an excellent shot at immediately handling pass-down reps and it’s not too far-fetched to think he can pass up Peyton Barber/Ronald Jones at some point this season. We can make a case right now that Dare is already the best receiver out of the backfield the Bucs have — and they are going to be passing a ton this year.